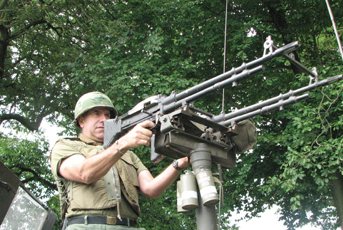 The machine gun as we know it today has come a long way since it was first developed in the closing years of the 19th century. Firearms designers such as John Moses Browning revolutionised warfare by providing soldiers with the means to multiply their firepower.

Then in 1898 Colonel R.P. Davidson of the Illinois National Guard experimented by mounting a Colt machine gun onto a Duryea motorised tricycle and in doing so he produced one of the first mobile weapon platforms.  Several years later on the other side of the Atlantic the German company of Ehrhardt produced the prototype of an armoured car equipped with a 50mm gun in 1905.  From these early experiments the motor vehicle evolved into many different forms of armoured fighting vehicles during the First World War which in turn led to the most powerful expression of weapon platform - the tank.

Military vehicles have evolved into all shapes and sizes but they invariably have one thing in common and that is they are armed with machine guns.

In the case of scout cars the machine gun is the primary weapon but in larger armoured vehicles it can be the secondary weapon alongside cannons. Tanks usually have only two machine guns, sometimes mounted co-axially with the main gun in the turret or glacis plate mounted, and sometimes a third can be mounted on the turret roof or cupola.

Half-track vehicles can be fitted with a range of machine guns and even soft-skinned vehicles such as Chevrolet trucks, Jeeps and Land Rovers are armed with machine guns. During the First World War some motorcycles were adapted to carry machine guns on the sidecars and this concept continued into the Second World War and some modern armies still do today.

At large military vehicle shows these armed vehicles come out on display to show how vehicles have evolved to become weapon platforms for machine guns from the light calibres such as 7.62mm through to heavier calibres such as .50 calibre and even 20mm which some weapons historians term as ‘cannons’. However one chooses to categorise them, it has to be admitted that machine guns make a vehicle stand out from the crowd. A truck may look fairly ordinary, such as a ‘Jimmy’ circa 1943, but add a .50 calibre on the race ring above the cab which some of them were fitted with, and it is transformed completely. Weapons such as these mounted on vehicles have to comply with the law and be legally deactivated, which is fine for static display purposes in order to show how the vehicle might have been armed when in military service. Groups taking part in battle re-enactment fit blank firing machine guns to vehicles just before battle commences.

Looking at some of the recent newsreel film coming out of locations such as Syria and Libya we have seen civilian pickup trucks fitted with all manner of machine guns mounted in a way which resembles more ‘Heath Robinson’ than a proper design. There are extemporised mountings but these were just plain ‘home made’ using anything to hand. During WW II the vehicles used by the Long Range Desert Group which used Jeeps and Ford F30 30cwt (1.5 ton) trucks were fitted with all manner of machine guns from Vickers and Brens to Browning .50 calibres and even Italian Breda machine guns and German weapons giving them the appearance of forerunners to the pickup trucks in Libya. Displays depicting the Vietnam War often include vehicles from the period fitted with a wide range of machine guns from M60 to Soviet-built 12.7mm DShkM on GAZ trucks or something similar.

Mounted weapons were originally single barrelled but today we have multiple-barrelled machine guns fitted to vehicles. The first design in the 19th century was the Gatling gun which was a multiple-barrelled design but it was hand-cranked, as opposed to using the gas from the firing rounds to operate the weapon which defines a weapon as being a true automatic machine gun.

The modern multi-barrel Minigun is an electrically operated version of the Gatling gun which has been produced in various calibres and is fitted to vehicles, aircraft and naval vessels and came to prominence during the Vietnam War along.

The M60 7.62mm calibre machine gun also came to prominence in Vietnam and was fitted to vehicles either as a single weapon on a pintel mounting or as a pair in a style which dates back to WW II and the Vickers ‘K’ guns which were mounted on Jeeps. You can even see quadruple machine guns fitted to larger soft-skin vehicles in an anti-aircraft role.

As with the designs of the weapons, so too the types fitted to vehicles on display come in a range of styles. There are the blank firing types, the legally deactivated models, recreated types and gas guns available from John Webster who runs WTAC.

If it is just a display weapon then a deactivated type obtained from accredited dealers such as Worldwide Arms, Ryton or Saracen Spares will suffice. These dealers can supply most types to suit the period or scenario being depicted from WW II to Vietnam and other conflicts such as Korean War, Northern Ireland and even the Gulf War. You can usually see what they have available through the pages of Gun Mart. Indeed, there are many groups who have stated they have purchased most if not all the weapons for their displays in this way.

If weight is a critical consideration then a replica weapon such as the type made by Bristol-based Chris Golding may be the way to go. He produces weapons to order such as the .50 inch calibre Browning machine guns for £950 and .30 inch calibre machine gun. The top cover and main body of the weapons are made from cast aluminium and the barrel is lathe-turned and the finished article is spray-painted black to look authentic. The finished result is very good and would serve to compliment any one of a range of vehicles which carried the weapons from Jeeps to half-tracks and armoured cars. They have no working parts and are purely for show, which drastically reduces the weight. I have seen other reproduction weapons but it must be said that Chris Golding’s work really is first class. He can be contacted by telephone on either 07977 057333 or 01179 877238 or by Email at: [email protected]

Reproduction machine guns are available from Graham Adlam who runs Spitfire Spares (www.spitfirespares.com) and has replica Vickers K guns for sale which fit in with the Long Range Desert Group (LRDG) or airborne forces scenario. Another alternative is the ‘gas gun’ system from WTAC and gives realistic impressions both to look at and sound effects for battle scenario.

On a closing note, do not dismiss out of hand something not familiar, because if a group has it on display it is because it is based on evidence through research.