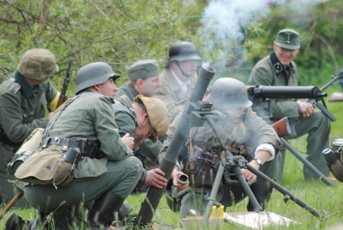 Last month I reported on a Second World War re-enactment at the Fortress Wales event. Standing out in the battle re-enactment action was a replica German Granatwerfer 34 mortar firing blank cartridges in a most ingenious fashion.

The real Granatwerfer 34 fired an 80mm projectile out to ranges of more than 2,600 yards and remained in service throughout the war. It could fire 15 rounds per minute.

Re-enactment groups obviously want something to add extra realism and firepower to their displays and so this blank firing mortar has been developed. The person who built it explained that he had to be aware of the law governing replica imitation firearms (RIF) and had to design a method of firing the blank cartridges without fitting a firing pin to the actual weapon.

The mortar consists of the main barrel which is mounted on a baseplate and the front end supported by a bipod to give the appearance of a real mortar. There is a very subtle feature in the design in the form of an outer sleeve fitted over the barrel which can be slid up to expose a cut out section located in the breech end of the barrel. The purpose of this is to allow the blank firing device to be ejected in a very discrete way. For all intents and purposes the mortar appears to be loaded in the same way as the real thing by dropping a mortar bomb down the barrel followed by a bang and fl ash. However, what is being loaded is really the blank firing device which has been machined from mild steel and comes in two parts which interlock together to form what looks like a mortar bomb. The lower portion has an integral firing pin and when the parts are fitted together they form the firing chamber for a blank shotgun cartridge of the type used in bird scarers. The fitting between the two parts is loose which gives an amount of play or movement, so that when the device is dropped into the barrel the weight is sufficient to impact on the firing pin causing the primer in the base of the blank cartridge to detonate and produce a bang. The upper portion of the device has a vent to allow the expanding gases to escape, producing smoke from the muzzle of the barrel making the whole effect very realistic. Once it has fired, the operator simply slides the outer sleeve up allowing the mortar bomb to drop out and the mortar is ready to be loaded and fired again.

With this device one man is loading the spare devices with blank cartridges and another is loading and firing and a good rate of fire can be obtained. The blank firing devices are carried in a replica ammunition box marked up to look like the real thing. The result adds more realism to the battle display and gives more movement by having two or three re-enactors serving the mortar as they would have on the real thing. It is a very cleaver concept, easy to use and best of all is legal and safe. Several groups are already using mortars like this in their displays and can be deployed from vehicles. British, American, German and even Russian battle scenarios can use this type of mortar to enhance displays.