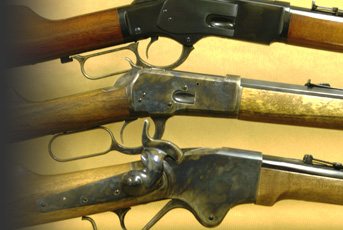 For a large number of Western re-enactors and show teams, firearms are an integral part of the set-up, and indeed a fair number could see no future in the hobby without guns. Putting on action shows for the public will, without exception, entail the use of as much “hardware” as possible, churning out copious amounts of noise and smoke. This is, after all, the main attraction for the younger audience as well as many adults.

The majority of these performances will be done using revolvers firing, in the main, 9mm blank cartridges, although there are a few smaller and larger calibres in use. For many years the Western re-enactor has had a good choice of blank firing revolvers, principally from European manufacturers, with varying degrees of quality, matched with differences in price. Clones of the ubiquitous Colt SAA or Peacemaker were initially the favourite choice for most participants, but more recently the desire for authenticity and variety has encouraged the use of different models from the 19th century, supplied in the main by the Italian gun manufacturer, Pietta.

Bring up the Big Guns

While, as stated, the revolver is the mainstay of these shows, there are times when a rifle or shotgun will be introduced. Where the shotgun is concerned, if you want it to make a noise then there is only one option – a shotgun certificate and a Section 2 weapon which can be used to shoot readily available blank cartridges. There were also some 12-gauge inserts available at one time which would take a 9mm blank but I’m not sure whether these are still around. Most folks will have a vision of the shotgun being used by a stagecoach guard – a short barrelled hammer gun. There are new versions of these “coach guns” on the market, along with a few second-hand old hammer guns with 20”, or shorter, barrels. However, these smoothbore guns with barrels less than twenty four inches are classified as Section 1 and need a firearms certificate to possess. Many years ago I bought an old hammer gun with 30” barrels and had it cut by a gunsmith to 20”.  Check with your police force before you consider this route as my firearms licensing department no longer allows this. (Editor’s note: On the Pedersoli stand at IWA this year we saw a 20” double barrel hammer-gun introduced specifically for Western re-enactors and called the ‘Wyatt Earp shotgun’. It also has a wide gape for quicker loading)

When it comes to rifles, once again the unlicensed weapons are very thin on the ground. For those portraying the earlier era of the late 17th or early 18th centuries, there are a myriad of single shot flintlock and percussion reproductions available from various Italian manufacturers. These guns are often offered in both rifled (Section 1 FAC) and smoothbore (Section 2 SGC) versions, with the latter being more prevalent among those using them purely for re-enactment. Buying a rifled model gives you the extra option of joining a gun club and doing some target shooting. Making “blank” charges for these weapons is simply a matter of sealing some black powder in a nitrated paper tube and ramming it home. Alternatively you can pour in your measured powder charge and follow it with a thin, tight fitting wad of polystyrene or florists foam. Be aware that if you follow this latter method that any unburnt portion of your chosen wad will be discharged upon firing at a speed and distance commensurate with the powder charge. On no account should you ever point a loaded gun, blank or otherwise, at another person and you should always know the distance that the projectile will travel.

Although they were by no means the only repeating rifles around in the late 19th century, the overwhelming favourite among Western re-enactors is the Winchester in its various forms.  In Europe they can buy a blank firing copy of the Winchester 1892 made by Rossi but these are illegal in the UK. They would probably be out of the time period for most re-enactors anyway although suitable for show teams. There have been some lever action rifles chambered for .22 or 8mm blank ammunition but these were also based on later model -1892 or 1894 – Winchesters and were seemingly of poor quality both in materials and design. So we come back to the one true way to get a reliable, well made and accurate reproduction of a Western type rifle – a firearms certificate. If you decide to go down this route then it makes sense to ‘go the whole hog’ and join a gun club. In this way you can also enjoy the pleasures of target shooting with your guns and perhaps enjoy Cowboy Action Shooting with the BWSS.

Let us first look at the repeating rifles available which will, in full bore guise, be without exception lever action weapons. Within the time frame of, say, the Civil War up to 1890, which will probably encompass most of the re-enactment scenarios, there are several choices on the market. Unless you want to use a 19th century original (big bucks, black powder and still needs to be ‘on ticket’ to shoot it) your choice will be an Italian copy of the Spencer or a number of pieces from the Winchester stable, plus the recently introduced Colt Burgess clone (on review in next month’s GunMart).

The Spencer will generally be seen with military impressions although would not be out of place on civvy street. Produced by Armi Sport these are quality reproductions which can be had in carbine or rifle format. Only slightly slower in operation than the Winchesters (the hammer has to be cocked separately to operating the lever) these seven-shooters are a very interesting alternative. Probably the best ammunition option for re-enactment with the Spencer would be the .44-40 calibre which should chamber the American 5-in-1 blank ammunition.

The Winchester variations are the Henry, Model 1866 (Yellowboy), Model 1873 and the Model 1876. The Henry is produced solely by Uberti, who also make copies of the other three along with Chaparral Arms. Unless this latter company have upped their game considerably in the last few years you would be well advise to pay the extra and get a Uberti. All but the Model 1876 are available in “pistol calibres” which will probably be more suitable for re-enactment and certainly easier to feed. Made in a variety of calibres, those chambered for .38/40, .44/40, .44spl and .45 Colt will accept the above mentioned 5-in-1 blank cartridges. These blanks are relatively expensive and the manufacturer does not recommend reloading after their initial use.

In the case of .44/40 calibre at least (I have not tried with the others), an alternative is to make your own by cutting .303” British cases down to the length of the complete cartridge then chamfering the case mouth to help feeding. In these toggle-link Winchester actions, where the cartridge is lifted from the magazine in a horizontal position, this is all that is required for a reliable feed. To get these to feed in a .44/40 Spencer will require some work on the case head, which is thicker and of a larger diameter than the .44/40.

For those already owning, or contemplating buying, a .38spl or .357 magnum version of these rifles, reloadable blanks can similarly be made from .357 maximum cases. For the longer .357, chamfering the case mouth is all that is required, but the .38spl will need the case to be trimmed to the length of a complete cartridge. Once again these work well in the early Winchester-type rifles but not in the later model such as the 1892, where the cartridge is fed into the breech at an angle. Once formed, the case can be primed, loaded with your required powder charge and topped off with a little grease, vaseline or light combustible material to keep it in place. Whatever you use, be aware that some of it may leave the muzzle on firing, so keep your distance from other members of the group and the public.

If your choice of re-enactment persona happens to be a hunter or other who may use a large calibre, single shot rifle then there are a number of alternatives available to you. Copies of the 1874 Sharps, Remington Rolling Block, Trapdoor Springfield and Winchester High Wall are all currently being produced. The calibre of choice will probably be .45/70 Government, and with no feed problems to worry about, it would just be a case of choosing a suitable powder charge and topping off with a retainer of some sort as above. In the past I have seen reproduction Rolling Blocks with a smooth bore barrel making them available on a Section 2 shotgun certificate.

As it is unlikely that centre-fire, blank firing rifles will ever be available in the UK under current firearms legislation, I hope this has persuaded one or two of you to take a look at obtaining a firearms certificate to extend the scope of your firearms use in re-enactment. For a few pounds more you could join a gun club and open up a whole new world of enjoyment with Cowboy Action Shooting.