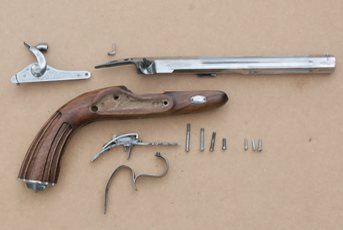 Probably less well known here than in the United States, where their products are marketed under the Traditions name, the Spanish company of Ardesa produces a range of classic muzzle loading rifles and pistols, a couple of which can be had in kit form, in both flintlock and percussion formats. Among the offerings are both European and American designs, with even a percussion derringer that seems loosely based on the Colt third model cartridge version. Their inventory also includes small cannon and modern black powder hunting rifles with synthetic stocks. The pistol we have here is their interpretation of a standard late 19th century percussion duelling/target pistol, in a style which could be described as a duelling pistol but with the rifled barrel of a target weapon.

This type of half-stocked pistol was common throughout the nineteenth century in both flintlock, and later, percussion models, with a variety of grip shapes. Barrels were usually around the same length as this example and could be round, octagonal or a mixture of both and with or without the flutes exhibited here. The early pistols were smooth bored but the advent of rifling improved accuracy for target work although the code of ethics for duelling stipulated that a smooth bore should be used. A rifled barrel was considered to be “cheating”.

Drawn up in Ireland in 1877, the Code Duello laid down specific rules under which gentlemen could satisfy their honour in a civilised manner. Twenty six rules covered all aspects of the duel, and the participants acted through intermediaries, or seconds.

Should the seconds not be able to effect a reconciliation by way of an apology from the offending party, and this was available up to the moment combat began, then at the selected time and place the duel would take place. The offended party had the choice of time, place and weapons.

Seconds would testify that the pistols were loaded “single and smooth” (multiple balls were prohibited) and the distance chosen, unlike the back-to-back and march ten paces as it the movies. The fact that both men had the courage to face each other and shoot would often be enough to satisfy both parties, even though blood may not have been shed. At other times it would be necessary to keep shooting until one or more was injured, sometimes mortally.

Another misconception seen in films is where the ‘bad guy’ misses with the first shot and the hero shoots into the air or the ground. Rule thirteen of the code forbade this with the instruction: “No dumb shooting or firing in the air is admissible in any case… children’s play must be dishonourable on one side or the other, and is accordingly prohibited”.

Whether shooting for sport or being able to stand one’s ground in the face of a challenge from someone who’s honour, or that of his lady, you had questioned, proficiency with firearms would have been seen as a necessity by gentlemen of the day. Thankfully, the law- abiding among us no longer settle arguments in such an aggressive manner, but many still enjoy standing up to a piece of paper to test our skill with firearms.

As many of these pistols were originally supplied in a case with accessories, usually in pairs, there is no provision on the pistol itself for a ramrod, the lack of which enhances the smooth lines of the weapon. At around seventeen inches long it is not a small weapon but its light weight of one kilogramme means it is very easy to hold and point.

The one-piece walnut stock has a long, oval grip which will accommodate all but the very largest of hands and the wide grooves aid in gripping the pistol. It is capped by a decorative butt plate which looks like it could turn this pistol into a formidable cudgel! This long, sloping grip enables the shooter to place their hand in a variety of positions so that it is easy to find a good hold with the pad of the forefinger on the trigger. The trigger guard has an extended spur for the placement of the second finger, a feature which I have never found particularly advantageous but which many will doubtless appreciate, so its use is down to the individual shooter.
The nine-and-a-half inch barrel has flutes in each flat, keeping down the weight and preventing the pistol from feeling front heavy. Each barrel flat has a small amount of “engraving” (probably acid etched) and the lock plate has almost full coverage in a scroll design. All of the metal work is left in the white and polished, although not to as high a finish as I have seen on the more expensive pistols of this type, but still very acceptable. The walnut stock has a nice oiled appearance and the wood to metal fit is again commensurate with the price of the pistol. The parts fit snugly together with no glaring gaps or overlaps but there are areas where attention to detail could have been improved slightly.

Sights are very basic with a v-notch blade at the rear, which has a small amount of elevation adjustment via a screw behind the sight, and a sharp, triangular post slotted into the top flat at the front. This latter is a tight fit but can be adjusted laterally. The pistol has a single set trigger arrangement, pushing it forward engaging the ‘set’ position for a light pull and it has a small amount of adjustment via a screw located just behind it. Screwing this too far out induces a little creep and users will need to play with this to get their ideal pull weight. I screwed it in just far enough to eliminate the creep and found that to be about right for me.

While I have a general interest in all reproduction firearms, this type of weapon falls outside of my sphere of real attraction (Western guns) so I never feel that I’m turning in the best possible performance from the piece in question. With that in mind I’m sure that in the right hands, this pistol is capable of considerably better results than the two-inch group that I achieved at twenty metres during a limited test. While this would be deemed inadequate in a target match, it would more than suffice in a duel. Given that, I did have the advantage that the piece of paper twenty metres away was not shooting back so I was not rushed into a shot!

These results were achieved with a 128-grain lead ball, a lubricated .005” cotton patch and twenty five grains of Henry Krank fine black powder. Ignition was through Remington number 11 percussion caps and there was not one misfire in two hours of shooting. The hammer has a relatively short throw from rest to half cock with the full cock notch engaging almost instantly afterwards. The hammer needed to be cocked fairly slowly and deliberately to ensure that full cock engaged correctly, otherwise, if loading with the hammer right back there was a danger of the hammer slipping forward to the half cock position when the ball was rammed home. I got into the habit of loading with the hammer on half cock. The pistol points well and its light weight means that it can be held at arm’s length quite comfortably, while the fairly light powder charge meant the recoil was very manageable.

I have never found cleaning firearms to be a chore and disassembling them gives an insight into the intricacies of the mechanism. The Ardessa is a fairly simplistic design and is very easily stripped for cleaning. The lock is held in place by two screws which enter the stock from the left side (viewed from the rear) and when this is tapped out the trigger assembly can be separated from the barrel by removing the screw through the stock. Removing the short wood screw at the rear of the top tang, and then the barrel wedge, allows the barrel to be lifted out of the stock. The lock and trigger assembly were quite tight fits into the woodwork showing some accurate cutting of the outlines even though the inner surfaces were a little rough.

Overall the Ardessa 1871 pistol would prove to be a very acceptable introduction to this type of shooting discipline, with the potential to perform, with some experimentation, much better than this short test allowed.

Duelling was finally outlawed towards the end of the nineteenth century in the face of overwhelming public opinion, after many years of attempts by governments, monarchs and the Church. Not too many years ago, while reading about the subject, I came across an advertisement from a group of American shooters who were looking to buy reproduction duelling pistols. Apparently they were intending to stage mock duels using very light charges and soft wads instead of lead ball! Who said the age of chivalry was dead? GM