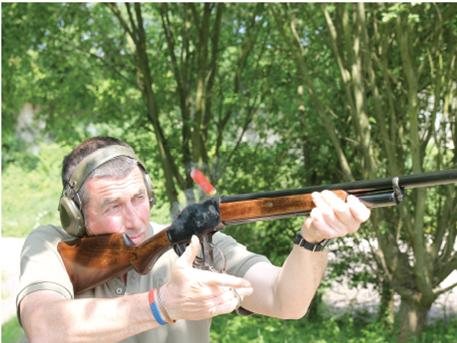 The name Winchester is synonymous with lever-action rifles and as a product must be considered their route to fame and fortune! From the earliest Volcanic design that B Tyler Henry adapted into the Henry rifle that saw service in the American Civil War in .44 Rimfire. Oliver Winchester acquired and adapted it into a family of rifles - 1866 (Yellow Boy), 1873 and 1876. All essentially the same gun with a toggle locking action and vertical feed block system, not the strongest but at the time the best there was. Realising it was time to up their game for their next rifle, they approached legendary firearms designer John Moses Browning. He came up with the 1886, which was a much improved product and the blue print in many ways for the rest of their family of rifles. - 1886, 1892, 1894 and to a degree the 1895.

Winchester wanted to add a repeating shotgun to their portfolio, so the logical thought no doubt was a big lever-action in 12-gauge and they got JMB on the case. Surprisingly he suggested a pump-action instead, which he probably had an idea for, but Winchester insisted; after all they were the kings of the lever-action! Browning stepped up to the plate, though still considered the pump a far more viable alternative, which history proved to be the case! But that’s another story for another article!

I’m a big fan of repeating shotguns having shot PSG (practical shotgun) for many years and much later got into Cowboy Action Shooting, where a shotgun was required alongside a pair of S/A revolvers and a lever-action rifle. Most people opted for a double, but a classic repeater; ‘circa 1900’ was also permissible. I went for an original Winchester 1897 pump - a truly great design for its day! However we must go back 10-years for the subject of this review, the Winchester 1887 lever-action shotgun.

The advent of Cowboy Action Shooting in the USA saw the creation of the SASS (Single Action Shooting Society) and also an opportunity for gun manufacturers to make more money. For example, Uberti cleaned up with their single-action revolvers and 1866 and 1873 lever-action rifles. In the US, many shooters used original 1897 pumps for the shotgun role, as I did. But there was a need for modern replicas of classic smoothbores. I first saw an 1887 at SHOT Show made by a Turkish company called Tri Star Arms for the US market, later Norinco of China pitched in with both the 1887 and the 1897.

Chiappa of Italy make a range of classic American firearms, one of which is the 1887, aimed primarily at Cowboy shooters. It’s a beautiful reproduction with a colour case-hardened action, good wood and excellent bluing, so quality is assured! They also do all-stainless, which just looks weird! Guns come in both Section 2 (shotgun) and Section 1 (unlimited) capacity for Cowboy competition on an FAC.

Given most pump and auto shotguns use a linear action, with the bolt moving back and forth to cycle the rounds, as do most lever-action rifles excluding the Spencer, the 1887 takes a very different approach. Instead it uses a rotary, quadrant-type breech block with a vestigial hammer system and offers no form of safety catch. Also, when the action is open, the internal mechanism and linkages are exposed, which is not a great idea.

Today we are perhaps used to pumps and autos with an under-slung loading aperture, separate from the ejection port; not so the 1887! Loading and ejection were all done through the top of the action, which as we shall see offers a rather unique feature. The general build is conventional with a barrel over magazine tube, the latter ending in a barrel band/clamp at the front. A feature Browning retained for the later Winchester 1897 pumper.

The forend is slim and consists of two side panels that leaves the bottom of the mag tube exposed. The pistol grip-style butt is quite low in relation to the receiver, which is compensated for by a tall comb and gives the gun an odd look and feel. This is finished off with a colour case-hardened plate, which is not very pleasant with heavy loads. The wood used is walnut and suits the rest of the classic finish nicely.

There are a number of model options, on test was a standard 28”, there’s also a 22” in the same finish, both include three, flush-fit multi-chokes and a basic pin sight at the muzzle. Chiappa also offers the Trophy Hunter, which has modern iron sights, a rubber recoil pad and a rifled, 12-gauge barrel; doubtless a good brush buster for close in deer and hogs with 12-gauge slug! There’s also the Mare’s Leg, which is a whippet-style, with just a pistol grip and an 18.5” barrel; probably goes down big in the US for home defence and SASS competition. Interestingly with its 18.5” barrel and overall length of 27” it would be classed as a large firearm in the UK but its calibre and smooth bore would mitigate against it!

I found loading a bit awkward initially, used as I was to holding my 1897 Pump in my left hand and using my right to thumb the rounds into the magazine. With the action open there’s not a lot of access to get them in as you can see, plus the single, central shell stop did not always flick up to retain the cartridge. So open the breech fully, drop a round in and use your left thumb to push it into the magazine, if the shell stop does not engage, press it down at the rear and it will flick up and work.

The magazine tube was crimped to make it a 2+1 (well technically 2 + 2) shotgun, so with two in the mag the third round is chambered by hand then the action closed. I had read that you could get a fourth round in the action (not the magazine) as with two in you can drop another in, so it sits between the shell lifter and the underside of the breech block giving a total capacity of four with it closed and chambered. Though it still conforms to the Section 2 description as to magazine capacity; hmm… Capacity with the Section 1 version is 5 +2.

The hammer, as can be seen, shows a near vestigial spur, making it a little awkward to lower it safely. I was trying this with the gun pointing down range in a safe direction and I managed to accidently let it go and it fired, so be warned. I found it better to carry it with an empty chamber then cycle the action when the shot presented.

Trigger pull is quite long and heavy and I found the butt a little on the short side. The action stroke is long and surprisingly smooth but there’s lot of mechanical noise as you cycle it. Reliability was 100%, with easy feeding and ejection, empty cases come directly up and back and you need to get some speed up when you rack it, so that they go over your head. I used some Henry Krank 30-gram 65 and 67mm, 12-bore #6 and #7 game loads and they were fine, but switching to heavier 2.75” shells proved that a steel butt plate is not the way forward! I let my game keeper friend Andrew Johnson, who is no mean shotgunner, have a shoot and he said he did not like the gun at all, as it kicked too much and did not feel right!

I did not think it felt that bad, but, as with any gun, it’s personal! The slim and smooth forend offers very little to get hold of and the lack off under belly means that the heat from the barrel migrates around the mag tube and it can get hot!