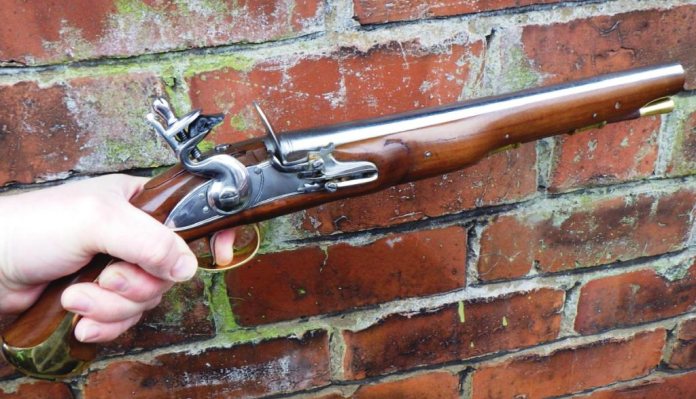 Most people who shoot have some level of interest in how firearms function, be it just enough to keep their guns clean, or a full-on fascination with history and engineering that is behind modern weapons. If you fall into the second group then you might also shoot historic arms or at least have studied them. For anyone who does have an interest in historical guns, but does not want to possess an actual firearm from the past, the item under review here might just help you fill a gap in your gun collection without the need for any paperwork.

This flintlock is a replica with a functioning action and a very realistic appearance. Made in India, the gun is not a finely engineered reproduction, it is not finished to modern standards and has not been made using plastic or any ‘better’ modern materials. Instead, you get a realistic-looking item, warts and all, that reflects the very basic way guns were made back in the day. This adds to, rather than detracts from, the appeal of the gun. The carving on the woodwork and the metal-to-wood fit is of an acceptable standard and the fully functioning lock is well made. It is also possible to fit a flint to complete the look if you wish.

You can cock the action, which does take some considerable effort, and with a flint inserted it is possible to generate a spark when the trigger is pulled (which is also an effort). There is, of course, no flash hole and the barrel is in no way suitable or possible to adapt to fire. The stiffness of the action and effort required to fire the gun shows just how far firearms design has moved on, thankfully, and hats off to anyone who ever had to fire one of these things in anger.

Despite its lack of refinement, this is a good looking gun and makes a great ornament (not popular with the wife though!) and attracts a lot of attention. People cannot help but pick it up. The flintlock weighs 1.4 kg, so is no lightweight, the pommel - which was called into service as a club once the shot was fired - is a large part of that weight, but the gun is well balanced and sits nicely in your hand. The pistol can be polished up nicely and, with the shipping grease removed, you can really bring all of the surfaces up to a nice finish.

For anyone who is involved in re-enactment from the period, then this is an ideal item. There is a large range of other inert guns on the Henry Krank website to choose from and they have supplied items to the film and television industry, including the BBC drama Gunpowder and the most recent adaptation of Vanity Fair. Props have to be of the most accurate standards and this is testament to the quality of theses inert guns. Definitely more than a toy, this is a well made and accurate reproduction, definitely worth a look.