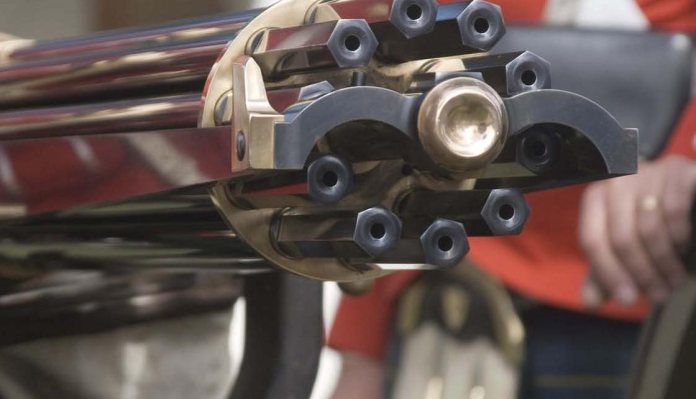 The Battle of the Little Big Horn is often cited as a monumental blunder on the part of George Armstrong Custer.

Detractors will argue that he should have taken the three Gatling guns that were available to him, while his supporters will support his decision on the grounds that the terrain was unsuitable. Whatever the reason for his choice, there is speculation that the guns could have provided a decisive advantage to Major Reno in the early part of the battle. The Gatling gun did however go on to prove its worth in many other engagements around the World.

Richard Jordan Gatling was born on a plantation in Carolina on 12th September, 1818. His father, Jordan, was a wealthy and well-educated man who was a master blacksmith and carpenter, besides being a prosperous farmer and landowner. Richard spent his formative years working on the farm and attending Buckhorn Academy, one of the better schools in North Carolina. At the age of 17, while in Virginia, he saw the US Navy unsuccessfully trying to come up with a new idea for ship propulsion. An inventive youth, he turned his mind to the problem and the result was a screw-propeller. Unfortunately for him, by the time he had perfected it; a Swede by the name of John Ericcson had patented the same idea some months earlier, and as a result became a wealthy man. This was a lesson well learned and henceforth Richard would patent his inventions immediately, beginning in 1839 with his rice planting machine.

By 1844 he had left the family home and was living in St. Louis, Missouri, where he began manufacturing and selling his rice planter the following year. In the winter of 1845-46 he contracted smallpox and almost died. During his recovery, he took an interest in medicine, having already lost two sisters to disease, and as a result attended Indiana Medical College and Ohio Medical College over a two-and-ahalf- year period. There is no evidence that he ever received a degree in medicine or that he ever practiced, but he began calling himself ‘Doctor’ Gatling.

In 1849, he moved to Indianapolis, Indiana, where he would live for the next 20-years, and spent some years speculating in real estate and railroads without much success. In 1854 he married Jemima Sanders, the daughter of a local physician and it seems that around this time the inventor’s bug hit him again. Up to this time all of his inventions, except the screw propeller, had been related to farm machinery and the need to simplify or expedite the amount of labour needed to do a particular task. The same reasoning would figure in the invention that will forever be associated with his name.

On April 12th, 1861, Confederate artillery fired upon the Union garrison at Fort Sumter in South Carolina, to begin what would come to be the bloodiest period in American history. For a little over fouryears, the continent was torn apart, with massive loss of life on both sides. The horror of the conflict was not lost on Richard Gatling, as he explains: It may be interesting to you to know how I came to invent the gun which bears my name; I will tell you: In 1861, during the opening events of the War, (residing at the time in Indianapolis, Ind.) I witnessed almost daily the departure of troops to the front and the return of the wounded, sick and dead. The most of the latter lost their lives, not in battle, but by sickness and exposure incident to the service. It occurred to me that if I could invent a machine – a gun – which could, by its rapidity of fire, enable one man to do as much battle duty as a hundred, that it would, to a great extent, supersede the necessity of large armies, and consequently, exposure to battle and disease be greatly diminished. I thought over the subject and finally this idea took practical form in the invention of the Gatling Gun.

In hindsight, we now know that rapidity of fire merely means more lives lost in a shorter time. Turning his paper drawings into a rudimentary working model took around six-months but the initial trials proved promising and he was granted US patent number 36836 in 1862, whereupon he engaged Miles Greenwood & Co. of Cincinnati to make six guns. Unfortunately, a fire at the Greenwood plant destroyed the six guns as well as his drawings.

Undeterred, he started afresh, this time engaging the Cincinnati Type Works, who made thirteen six-barrel, .58 calibre percussion guns. The ammunition for these early guns comprised of steel tubes, one end of which had a nipple to accept a standard musket cap. The tube was filled with powder and ball from the other end making them an early example of ‘self-contained metallic cartridge’. These ‘cartridges’ were loaded into a hopper on top of the gun and gravity fed into the mechanism.

One turn of the handle fired a shot from each barrel, and, as long as the ammunition was fed into the hopper and barring mechanical failure, these early guns had a claimed cyclic rate of fire of two hundred rounds per minute. Although the Gatling was not officially adopted by the military during the Civil War, (army leaders are notoriously conservative when it comes to change, besides which the North and South were both unsure of where Gatling’s sympathies lay) Union General Benjamin F. Butler personally bought twelve of these guns in 1863 for use by his troops.

In 1865, the Cooper Firearms Manufacturing Company of Philadelphia was contracted to manufacture eight guns of oneinch calibre and the following year they were tested at three Government arsenals, one of which was Frankford, whose report noted: The gun worked smoothly in all its parts, and the cartridges were fed and thrown out after firing, with ease and certainty. The cartridge also worked well, and no more difficulty is to be experienced with it than with any other metallic cartridge of similar construction, if indeed so much.

The tests proved successful and in August 1866 Gatling was awarded his first Army contract for 50 of the oneinch guns and another 50 for the recently adopted .50-70 centre fire cartridge, many of which were later modified to accept the .45-70 Government cartridge. Looking for a major manufacturer to complete this contract, Gatling turned to Colt, facing a downturn in demand after the War, who accepted and delivered the guns in 1867.

From this date until the end of production, Colt produced all Gatling guns made in the United States. The one-inch guns fired either canister shot or a single bullet weighing around eight ounces. These arms had six (a few had 10) exposed barrels that were gravity fed from a box magazine. The barrels revolved in an anti-clockwise direction, with the cartridge being loaded at the twelve o’clock position, fired at seven o’clock and ejection began at five o’clock and was completed at two o’clock. Excluding the carriage and limber, the oneinch gun tipped the scales at 1008-pounds, while the .50 calibre weighed 224-pounds.

Small numbers of these guns in both calibres were sold to foreign governments in Europe, Turkey and Japan. The Russian versions – 120 were ordered in 1868-69 – were 10-barrelled weapons chambered for the same .42 calibre cartridge as the Berdan rifle, which was also manufactured by Colt. Turkey, a long-standing enemy of Russia, ordered 200 Turkish Snider .58 calibre Gatling guns in 1870, also of ten-barrelled construction.

Nobel Brothers of St. Petersburg, Russia were subsequently allowed to manufacture Gatling guns for home use. The Gatling was also produced under licence by Paget & Co, of Vienna and by Armstrong & Co. of Newcastle-upon-Tyne.

In 1874, Richard Gatling and his family moved to Hartford, Connecticut, where they resided until 1897. The same year the Gatling Gun Company head office was moved from Indianapolis to Hartford. Officials of the Colt Company served on the board of Gatling and in 1897 Richard Gatling was succeeded as company president by John H. Hal and Lewis C. Grover, both serving executives of Colt. The Gatling Gun Company had, in effect, been absorbed by the Colt’s Patent Firearms Manufacturing Company. Richard Jordan Gatling died of heart failure on 26th February, 1903 at his home in New York.

End of the line

The hand-cranked Gatling gun underwent a number of changes and improvements during its 40-or-so-years of production, the most recognisable probably being the models with 10 barrels and a bronze casing over the breech, began in 1874 and accepted by collectors as the first of the ‘Classic Gatlings’.

All of these weapons fired the 45-70 Government cartridge. In 1893 a patent was granted for electrically operated, watercooled Gatling gun with 10 enclosed barrels and the motor inside the breech casing. This weapon, with a cyclic capability of 3000 rounds per minute, was intended for naval use. By this time, the writing was on the wall for the Gatling gun and even though a gas-operated gun was patented in 1895, the less costly, lighter, more manoeuvrable, gas operated and belt fed weapons were proving stiff competition for the old warhorse. Indeed, Colt themselves were already embracing this new technology and were producing a John Browning designed gun the same year. In 1911 the U.S. Army declared the Gatling gun obsolete.

In 1945 the U.S. Army Ordnance and Research Development Service was given a project to come up with an aircraft gun with a high rate of fire. A multi-barrel Gatling type of weapon was considered to be the most feasible basic design because it allowed some barrel cooling during rapid fire, and the firm of Johnson Automatics, Inc. were awarded a research contract to determine the feasibility of the idea. Experimenting with a slightly modified, motor driven Model 1883 Gatling gun, Johnson’s achieved a cyclic rate of 5800 rounds per minute. The following year, General Electric, along with the U.S. Air Force and Army Ordnance, began work on ‘Project Vulcan’. The culmination was the M61 Vulcan Aircraft Gun, a 20mm weapon with a cyclic rate of around 6000 rounds per minute. Perfected in 1956, this basic design has been improved and modified and is still in use today.

An excellent animation of the workings of a Gatling gun can be found at: www.victorianshipmodels. com/antitorpedoboatguns. Click on the ‘Gatling’ link and choose the model.

Typing ‘Gatling gun’ into the YouTube search bar will bring up examples of old and new versions of the guns in action.