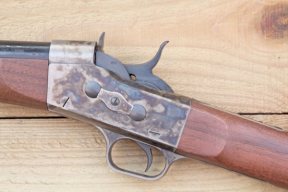 The current Henry Krank catalogue lists 12 models of Pedersoli Rolling Block rifles in a variety of barrel lengths and calibres, ranging from the diminutive .22 rimfire to the shoulder punishing .45-90. Most of the offerings are in this larger calibre and its smaller cousin the .45- 70, but there are a couple of mid-range specimens (.30-30 and .38-55) along with two ‘pistol calibre’ examples in .357 magnum and the .44/40 that we have here. The small calibre versions are ideal for those whose range use forbids the heavier models and the shooters who like to shoot for extended periods without going home with a bruised shoulder! There is also a financial factor when taking account of reloading costs. Regardless of the model you choose, or the reason for that choice, you can be assured of the Pedersoli quality of fit and finish.

Introduced with their iconic Model 1873 rifle, the .44 Winchester Centre Fire cartridge – more commonly termed the .44/40 – has long been my favourite ‘pistol calibre’ round, and back in the good old days of BWSS meetings before the government of the day deemed all handgun shooters to be potential murderers, I carried a pair of Armi San Marco single action revolvers and a lever action rifle chambered for this old timer. I still have a couple of Italian lever guns in my cabinet which digest this round. Its reputation for being difficult or a pain to reload is definitely not justified and in the last 25 years the number of cases I have thrown away is extremely small, and most of those were for cracks or splits. Cast bullets are readily available and most of the powder manufacturers list one or more loads for this calibre, the exception being Vihtavuori with their Tin Star powder; strange that a powder designated as a ‘cowboy’ propellant does not show a load for this classic Western cartridge.

Towards the end of the American Civil War the US government placed orders with Remington for 20,000 of their newly patented split- breech carbines, from the design of Leonard Geiger with improvements by Remington’s own Joseph Rider. The first 5000 were in .46 rimfire calibre with the remainder chambered for the .56-50 rimfire Spencer cartridge. Unfortunately, none of these guns were delivered in time to see use during the conflict and most were placed into storage.

As late as 1871 the .46 calibre carbines were being used by the US 9th Cavalry. In October of 1870, almost all of the 15,000 .56 calibre guns were sold back to Remington for the price of $15 each. The company subsequently sold them to France for use in the Franco-Prussian War.

After the war Remington concentrated their efforts into production of this action as their Rolling Block mechanism in single shot pistols, rifles and carbines. Along with a comprehensive selection of cartridge derringers, the success of the rolling block ensured the prosperity of the company when many other small arms manufacturers were struggling after the loss of military contracts. Production of the larger calibre rifles ceased around the turn of the 19th - 20th century, but the smaller chamberings continued until about 1933.

During the late 19th and early 20th centuries the Remington factory churned out many hundreds of thousands of their rolling block rifles and carbines. The variety of calibres and barrel lengths available was even greater than today’s Pedersoli offerings, and combined with several different frame sizes the choice for early shooters was quite amazing.

At first glance this carbine looks, to my eyes, distinctly out of proportion, even with the short forearm. This forearm is retained by a barrel band, kept in place by a spring-loaded catch at its front end – a throwback to muzzle loading designs. Other versions of this rifle use a screw through the wood into the base of the barrel. With the stock and receiver being almost the same length as the barrel the weight appears to be all in the rear half of the gun, but the gun is surprisingly well-balanced and this ‘light front end’ proves to be a bonus for off-hand shooting, as against the longer- barrelled, large calibre versions which can be tedious after a while. Unlike their 19th century counterparts, Pedersoli appear to use only one frame size for all of their rolling block models, although this one shows a slightly different profile to the .357 model I tried last year, and this adds to the illusion of the weight being at the back end.

The oiled walnut stock and forearm are beautifully finished and the fit to the metal parts is very good. The receiver, bottom tang and trigger guard, barrel band and butt-plate are all finished in muted case colours, with the rest of the metal work being blue/black. This model has an adjustable rear sight which is the same one used on the company’s reproduction of the Springfield Trapdoor. In its lower position it is graduated up to 500 yards, with the markings on the ‘wing’ of the base, while raising the arm increases this to 1200, a shade optimistic for this cartridge! With this chambering and the short barrel, perhaps the fixed sight of the .357 magnum version might have been more appropriate. The front sight is a tapered blade, the base of which is dovetailed into the barrel. The rear face is serrated and it is topped off with a round brass bead.

The Remington Rolling Block is one of the simplest and strongest firearms actions ever manufactured and this neat little package would seem to be an ideal starter gun for those new to centrefire rifles.

As stated above, this has been a long-time favourite cartridge of mine, and I always have some loaded in my safe. My standard load for 50 metres or less consists of a 200 grain RNFP lead bullet backed by 8.5 grains of Unique powder, this proving to be a great load for the two-gun combination that was used in BWSS events. Being easily managed in a single action revolver, this combination turns out to be a pussycat when loaded in any long gun, and felt recoil in this model was almost negligible, even though it weighs in at around 41⁄2lbs less than the earlier mentioned .357 version. Sight picture is very good and with my old eyes and shaky hands I could keep five shots in a three-inch group at 50 metres, and others would doubtless do better. The trigger broke at a shade under six pounds and everything worked exactly as it should for the whole day. The extractor brings the spent case out just far enough so that you can grasp it easily.

I would recommend this piece to anyone looking for a single shot rifle which is a bit more than .22 rimfire but not as demanding as the big ‘buffalo guns’ that come from the same stable. Comfortable to shoot for long periods and relatively inexpensive to load for, this Pedersoli will give the owner great service and satisfaction, both indoors and outdoors.