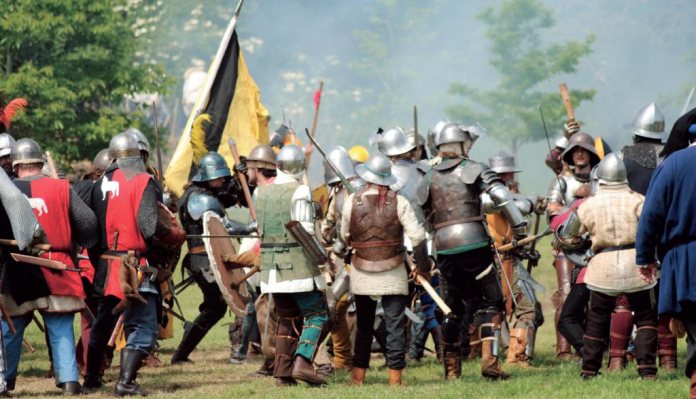 Every re-enactment event is interesting and provides excitement on a level unlike any other form of real-time family entertainment. Whether it is the Roman Army, Crimean War or WWII, each one appeals to the enthusiast interested in that period. Historical displays and some re-enactors can be flexible, getting involved with more than one group or period. Visitors like to see as much as possible and enjoy variety in displays. Event organisers and re-enactors realised this and responded by introducing an overlap between displays, such as the Boer War extending into the First World War.

This new style allowed more groups to attend in support and present a range of in-depth displays for visitors to see history brought to life. That way any period, say, English Civil War, for example, could be expanded to include the Monmouth Rebellion of 1685. The idea formed that it would be great if a range of periods could be brought together in a single event to present a timeline of history. One of the first people to achieve this was Howard Giles, who at the time was working as head of the Events Department at English Heritage. In the late 1990s he planned a massive multi-period (MP) event to be staged at Kirby Hall, an Elizabethan manor house, near Gretton in Northamptonshire, calling it ‘History in Action’.

The first event was presented in 1996 and it was an immediate success with the visiting public. From Romans to WWII, and all periods in between, the show had everything. It also included a traders market area where people could buy items and re-enactors could buy gear from boots to swords. It was attended by re-enactment groups who brought horses for cavalry displays, tanks for WWII battles and they even dug trenches for realism. With columns of marching soldiers, it was an unforgettable sight.

Over the next few years more MP events were organised, but nothing on the scale of History in Action. Then, in 1999, Gary Howard, a highly respected horseman and re-enactor, announced he was producing his own event called ‘Military Odyssey’at the Kent County Showground in Detling. It was a success and today, although Gary is no longer involved, it continues to be the premier reenactment event where 2,500 years of military history is showcased.

Several other MP events sprung up across the country including ‘Fortress Wales’, which was originally held at Margam Park near Port Talbot before relocated to Caldicot Castle with its vast grounds. The Tank Museum at Bovington in Dorset presented a couple of similar events called ‘Arms and Armour’ before reverting to mobility displays with tanks.

Not all events of this type have proven a success, such as ‘A Walk Through History’, held near Highbridge in Somerset. Despite having all the right ingredients, from Romans to the Wild West and the Vietnam War, it did not work, largely because of the venue location and insufficient visitor numbers. These events need good reenactment groups to present the best static displays and set-piece battle re-enactment scenarios. If organisers have got the format right, picked the best venue and the date does not clash with anything else, there is no reason why it should not work. There is no doubting that Military Odyssey has achieved all this and the show is recognised as being the largest of its type in the world, which is an accolade only achieved through hard work and having the best groups.

All-encompassing These events are all-inclusive experiences where the organisers want to offer a variety of choice, satisfying everyone’s interests. There is room for everyone at such shows to give a balanced view of history in a way which is both educational and entertaining for all the family. They also serve as recruiting grounds for future re-enactors who are attracted by the prospect of becoming a Viking warrior, riding as Napoleonic cavalry or fighting a WWII battle with machine guns and tanks. People enjoy watching action films like ‘Saving Private Ryan’, ‘Gladiator’, ‘1917’ and ‘The Vikings’, and joining a re-enactment group provides the chance to take part in recreating these kinds of events in real-time in front of an audience. Experienced re-enactors know what it feels like to be a medieval knight during the Hundred Years War or a soldier landing on the beaches of Normandy. They also know that what they are doing is the closest thing anyone will ever get to do these things for real. Potential recruits can walk around from one time period to another and talk to groups before deciding which period and depiction is for them. The War & Peace Revival Show can trace its present format back to a time when it was a showcase for military vehicles and attracted those enthusiasts accordingly. Over the years it has evolved to become a MP show for events which happened during the 20th century. The Second World War forms a large part of the show with static displays presented by re-enactment groups depicting all belligerent armies. They bring with them vehicles and artillery, which are used in thrilling battle re-enactment displays in the main arena. Should a potential recruit decide to join up they can walk around the trader’s stalls and buy all the kit they need to become a soldier of their choice.

MP events can be themed around many military developments, after all, that is what air shows do all the time with fly pasts by Spitfire and Hurricane aircraft to the latest designs such as the F-35B ‘Lightning’ and the ‘Flying Legends’ held at Duxford in Cambridgeshire. The ‘Wartime in the Vale’ show, at Ashdown Camp, near Evesham in Worcestershire, features upwards of 500 vehicles from WWI to more modern types, some of which participate in arena displays. Events can be themed on specific subjects, such as artillery through the centuries and even cavalry from the Romans to WWI.

There is a lot to see and take in which is why some shows, like Military Odyssey, are held over three days on a Bank holiday weekend. War and Peace Revival lasts a whole five days while Wartime in the Vale, being a whole lot smaller, is held over two days. The displays are full sensory, ranging from cookery, with smells and tastes, to action with sound and sight, while some groups even allow objects to be handled. With the promise of such interactive experiences, no wonder these events remain popular as the best all-inclusive family entertainment.

At the time of writing, there are still constraints imposed on us to prevent the spread COVID-19. Some of them appear to be working and restrictions are being lifted, but with conditions. Museums are opening and it did look like Military Odyssey would go ahead but unfortunately, the 2020 show has now been cancelled. They have posted details on Facebook and the official website at military-odyssey.com. The show was going to include 4,000 reenactors depicting Romans to WWII and more recent military experiences. There were also going to be at least 200 vehicles and around 250 traders stands. It looks like we will have to wait until 2021 to see them all!

Other organisers will no doubt be making similar decisions for some events happening later in the year, so visit their websites for the latest news. We have all been through a lot over the past few months and everybody deserves to have something to look forward to. Who knows, after all this, there may be a surge in new members joining re-enactment groups, which would be great news for the pastime. If that does happen, we look forward to seeing them in the ranks at events in the future.