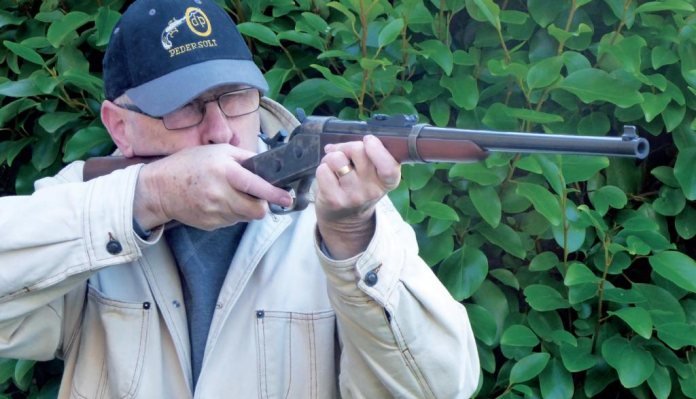 Whilst the .45 Colt cartridge was a popular handgun option during the 19th century, it was never offered in rifles of the day. Its popularity as a long gun chambering stems from the latter part of the 20th century when American shooters wanted to emulate their forefathers by having a rifle and a revolver using the same cartridge. They sought a lever gun to accompany their beloved .45 Colt Peacemaker for cowboy action shooting. The Italian arms manufacturers were quick to take up the challenge.

The rolling block mechanism is simple but strong, using an interlocking hammer and breechblock. Initially patented in 1863 by Leonard Geiger, the design was developed and improved by Remington employee Joseph Rider, and the first examples of the action as we know it today were introduced in 1866 in the form of single-shot pistols for the Navy. These pistols were offered in .50” calibre rimfire, and later in .50” centrefire. By 1872 the Army was also using the centrefire version. The design of the grip suited target shooting, and from the early 1890’s to the end of the first decade of the 20th century, the company turned out a small number for the civilian market in calibres from .22” rimfire up to .44” S&W centrefire.

The predecessor of Remington’s rolling block rifle, termed the ‘split breech’ models, saw action with the Union Army during the last months of the American Civil War, in the form of carbines chambered for .46” and .50” rimfire cartridges. These guns, the first metallic cartridge arms bearing the Remington name, were made under subcontract by the Savage Revolving Arms Co. of Connecticut. In 1870 the U.S. government sold the majority of these guns back to Remington, who in turn sold them to France for use in the Franco-Prussian War.

Once again it was the American Navy that first saw the potential of the rolling block design when, in 1868, they purchased 5,000 of the model 1867 carbine in .50-45 centrefire calibre, followed by a small batch of cadet rifles in the same calibre. By the beginning of the 1870’s the Remington rolling block had begun to make its mark in both military and civilian circles, with production of military models ceasing around 1888, by which time over one million had been manufactured, in the form of carbines and full-stocked rifles. Many of these were made under licence in foreign countries, with a number of governments adopting the rolling block as their standard military weapon.

Sporting shooters recognised the merits of the design and Remington produced thousands of rifles in a variety of calibres with multiple options. Four basic frame sizes; No. 1 (the largest, on which all military rifles were built) to No. 4 (the smallest) forms the core around which there was a choice of barrel length and weight, stock shape and finish, sights and a myriad of calibres from .22” rimfire to .50- 70 centrefire. Several thousand shotguns were also produced in 16 and 20 bore. Around 250,000 lightweight, modified examples were made in rimfire calibres, aimed at the young boys’ market. All were in a take-down configuration.

Not quite perfect The example we have here is based on Remington’s Light Baby Carbine, produced c. 1885-1910 in .44” rimfire and centrefire types. At first glance the rifle looks out of proportion with the short (20”) barrel on a reasonably large action, but it’s nice to handle. The hammer spur, too, appears to be unnecessarily large, but again in use it was just right. The tapered barrel, with 8-groove rifling, has a black gloss finish and the hammer, breechblock, trigger and a couple of screws are also black with the rest of the metalwork having a grey case coloured finish, with the exception of the barrel band spring, which has a purple hue. The stock and forend are straight-grained walnut and on this occasion, the wood to metal fit is a little less than perfect by Pedersoli standards, but still nothing to really complain about. As has become the norm, the calibre is given as .45LC (Long Colt) when it should be just .45 Colt as there is no .45 ‘Short’ Colt. One can hardly blame Pedersoli and others for this as Colt themselves now advertise their Single Action Army revolver in ‘.45LC’ but the ‘LC’ is omitted from the marking on the gun. The rear sight is a folding ladder type in a block which is screwed to the barrel. The ‘wings’ of the block are stepped, and the right side is marked from 1 to 5, with the ladder portion having 6-12 markings. This is the standard rear sight for the large calibre models and it is very unlikely that the ladder will be needed for .45 Colt! At the front, there is a tapered blade dovetailed into the barrel and this has a serrated rear edge topped with a round brass bead. The sight picture is quite good but both of the rear sight notches are v-shaped, and I would have thought it was just as easy to make them u-shaped to match the round front bead. The top tang is drilled and tapped, enabling you to fit one of the optional longrange sights, and the front could be removed and replaced with a tunnel type with interchangeable inserts, although such a combination is usually better suited to calibres shooting longer distances than the .45 Colt is capable of.

Loading requires the hammer to be pulled back to full cock, followed by the block which exposes the breech. The breech block has a serrated ‘ear’at top right to aid operation. Load the cartridge in place, push the breech block forward and you are ready to go. Repeat the above process after firing and as you pull back the breech block it activates the extractor, drawing out the empty case far enough for you to manually remove it from the gun. I find single-shot rifles quite relaxing, but I guess in a desperate situation back in the day an accomplished shooter could comfortably get off ten shots a minute with this action.

As someone interested in the historical side of American firearms, until fairly recently I had never owned a rifle in this calibre, preferring the historically correct cartridges for my ‘pistol calibre’ long guns. Age must be mellowing me as I now have a Uberti Model 1873 in .357 magnum and a copy of the Colt Burgess in .45 Colt from the same manufacturer. I am still experimenting with loads for the .45 and in the case of this rolling block shooting was done at 25 yards maximum range. To keep within the range safety limitations, the powder charge was fairly low at 6.5-grains of Unique behind a 255-grain RNFP lead bullet ignited by Federal large pistol primers. With the rear sight on its lowest setting this load was printing around 2” high at 25 yards. Recoil was very modest, but the downside was that case obturation was not enough to fully seal the fairly thick case wall in the breech, resulting in some blowback which caused dirty cases. A stiffer load would all but eliminate this. After around 50 shots, the powder residue also began to stiffen the operation of the breechblock and the hammer. The dirty cases started to resist removal as the fouling built up in the breech. This is one reason why Winchester and others did not chamber their lever guns for this calibre in the 19th century. Imagine the effects of black powder in this situation.

The trigger on this example is one of the sweetest I have ever encountered on a reproduction rifle. I would guess the weight to be around 4 lbs maximum and it broke very cleanly without a hint of creep. Length of pull is a little short at a shade under 13” so larger shooters may find a problem in this area.

The mechanism can be easily removed from the frame by first loosening the screw on the left side of the receiver and taking off the wing nut, which allows you to tap out the two large pins that hold the hammer and breech block. These parts can be lifted out through the top of the receiver. The trigger mechanism is on the combined trigger guard/bottom tang, which is held in place by two screws running through from the left side. Getting into the nooks and crannies with an old toothbrush or cotton buds makes the clean-up quick and easy.

This is a neat little rifle for anyone who may be limited to indoor shooting but likes the idea of having an example of this classic design. There is an excellent video on Midway USA website entitled ‘How a Rolling Block Operates’.