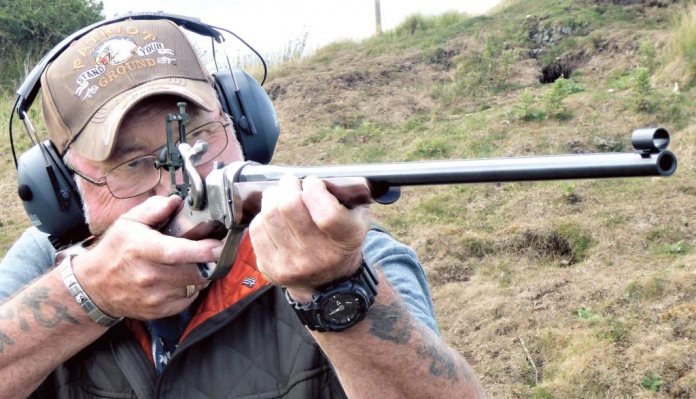 I have a great admiration for artists of any kind, whether they work in oils, wood, stone or, in this case, metal. Back in 2005, I had the pleasure of watching one of Pedersoli’s engravers working on a shotgun receiver with a chisel and hammer and was blown away by his talent. It is unlikely that the same man did the work on the rifle we have here, but it is fine work none the less. The quality of Pedersoli reproductions goes without saying and to have this tasteful, if minimal, addition to the gun just puts icing on the cake.

Other than shotguns, engraved firearms seem to be in the minority in today’s market. While many high-end big game and stalking rifles are offered with highly decorated metalwork, step on to a club firing line and the chances of seeing an engraved rifle will be very slim. Judging by the amount that are available at auctions, particularly in the United States, it would appear that decorated guns were a little more prevalent in the past.

Like many of the big players in the 19th Century, such as Colt and Winchester, Sharps included engraving as an optional extra to their guns, although there are fewer examples around than their contemporaries. Those that do crop up are more likely to be on the Sharps derringers than the bigger single shot rifles. Perhaps this is because the long guns were used by target shooters and hunters, where function is more important than form. And while a bit of decoration improves the appearance, it does not add anything to performance!

Despite his name being synonymous with firearms, both large and small, in the American West, information on the life of Christian Sharps is very sparse. What is known for certain is that he worked at the Harpers Ferry Arsenal in the 1830s and, as this was one of the major firearms manufacturing centres of the time, he was well placed to learn the processes used in manufacture and to observe the development of firearms mechanisms.

He would likely have been present when the trial of breech loading arms was carried out in 1837, and it was probably here that he began forming the idea of building his own gun with the notion of improving on the designs that were tested. If this is the case, then it was a long time in coming to fruition, as his first patent was not granted until September 1848. The first models were capping breech loaders (reproductions are available today) and continuous development meant that by the outbreak of the American Civil War he was able to offer his .52 calibre Model 1859, and later the Model 1863, to the Union forces. During the conflict, the government purchased some 85,000 guns, at a cost of 2.5 million dollars. By the end of the War, percussion weapons were becoming obsolete and subsequent years saw a number of these guns converted to breech loaders in both rimfire and centre fire models.

Sharps began manufacture of breech loading rifles as early as 1866, but it was not until the Model 1874 that production reached any quantity; it was first made in 1871, so the origin of the name is uncertain. It is on this rifle that the majority of today’s cartridge reproductions are based. Check out the Pedersoli website for an impressive list of models available.

I would presume that the most popular calibre among today’s larger calibre, single-shot rifle shooters is .45-70, with a few opting for the heavier .45-90 and .45-120 options, so the .38-55 that we have here may be a bit of a novelty. Originally developed by Ballard as a target cartridge, it was later available for Winchester’s Model 1894 rifle, and the .38-55 case was used as a basis for the more successful .30-30 cartridge.

The ‘Little Betsy’ is a scaleddown version of the big .45 calibre rifles and comes in at a shade over 7½lbs. The hammer has a slenderer neck than the larger calibres and, along with the receiver, trigger guard/lever and the butt-plate, is left in the white. The tapered, 24-inch round barrel has a couple of inches of octagonal profile at the breech end and is finished in a semi-gloss black. The straightgrain walnut stock and forearm with a Schnabel-type tip are beautifully finished and the photographs do not do justice to the colour. Overall fit and finish is excellent, but I could not help but think that some chequering at the wrist and forearm would have turned this handsome rifle into a stunner.

On taking this rifle from the rack in Henry Krank’s shop, I noticed that there was no rear sight on the barrel nor was there provision for one. The top tang is tapped for an optional sight and I wondered how much that would add to the price! My worries were unfounded, as the rifle comes with one of Pedersoli’s Creedmoor models (model USA465) which needs fitting. The front sight is a tunnel affair, containing a round-topped post (USA 451). The rear has infinite variations for windage and elevation while the front can be moved left to right in its dovetail. The sight picture is probably as good as it gets with irons and some long-term testing with a variety of hand-loaded ammunition should make this rifle a tack driver, as the double set trigger is a joy to use.

Like many of its percussion predecessors, the Sharps design has its hammer offset from the centre line of the bore. While the hammer from the muzzle loaders made direct contact with the source of ignition, i.e. the percussion cap, the energy from the Sharps hammer must be transferred some half-inch to the left for the spring-loaded firing pin, located in the breech block, to do its job. This has always seemed a little over complicated to me, but it works, so I guess Christian sharps knew what he was doing.

The Sharps is described as a ‘falling block’ rifle and, as you lower the trigger guard/lever, the block comes down with it to expose the breech, and for no particular reason, I have got into the habit of putting the hammer on half-cock before beginning the loading process. As the lever reaches the vertical position, it is held in place by a spring. Push the cartridge home, raise the lever, cock the hammer and you are ready to go. Front trigger first, then the set rear trigger.

Commercial ammunition for this calibre is available here in the UK in the form of Winchester 250-grain SP but I feel that this may be aimed at hunters, as this cartridge is close to the ever popular .30-30, so could it be deer legal in the UK? However, at a price of £150.00 per hundred, I figured that hand loading was the way to go for the shooting I wanted to do. Dies, cases and bullets are available, as are bullet moulds and I decided on a bit of casting for this one. 250-grain bullets from a Lee mould sat in Starline brass were backed by 6.5-grains of IMR Trail Boss powder (sadly no longer available). I chose this propellant simply because I had it on hand, there is data available for other brands.

This was a rather mild load, even with this somewhat light rifle and recoil was very comfortable. After I got the sights more or less right, I managed a 4-shot group of around four inches. It was actually a 5-shot group of just over six inches, but I’ll discount the flier! In less blustery conditions, with a bit of load development, I think a better shooter could very easily cut this in half.

To reload, the lever is pushed down and, when it comes up against the spring, needs to be pushed further forward to extract the case, after which it will return to the perpendicular position. The spent case is extracted rather than ejected and must be pulled clear by hand. I did not experience any blowback and all cases were removed without any effort.

Cleaning the gun is a simple task, as the barrel can be done from the breech end and the block is removed by taking out the pin on the right side of the receiver and dropping it out of the bottom. Sometimes, the simple things in life are the most rewarding. In an all too short session, this rifle and ammunition performed faultlessly, and I really enjoyed getting my hands on another version of the Sharps mechanism.

This is my second venture with the .38-55 cartridge and while I constantly say I do not need any more guns, if the Uberti recreation of the Winchester 1894 ever hits these shores; watch this space!