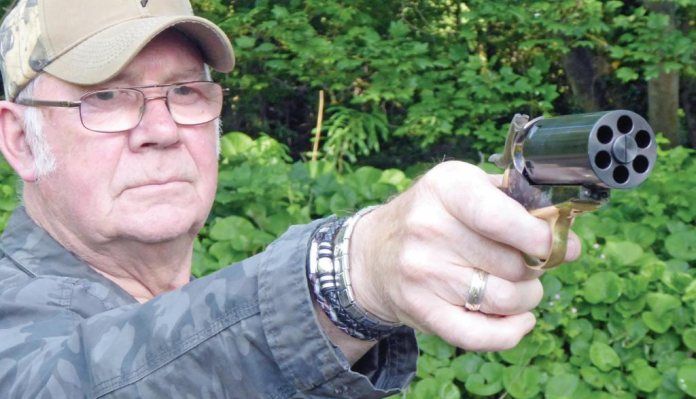 Over the years Pietta has come up with a number of designs of revolver that, while bearing a passing resemblance to models from history, can best be described as ‘hybrids’. Their brass-framed versions of the Colt 1860 Army revolver and the Remington New Model Army are prime examples. They have also taken a chance on offering models that are less popular than the run-of-the-mill pistols. Their Starr and LeMat revolvers are super renditions of guns that will appeal to those whose interest in the history of the American West runs deeper than the TV and movie screens. There is no doubt that the design team in Brescia is not afraid to think outside the box, as they prove with this latest offering.

My first thought when I saw this pistol was ‘why?’. I had doubts about hitting anything more than a few feet away, so target shooting is out. Needing a licence to possess it takes it out of the sphere of many re-enactors, and those who do have Section 1 certificates will likely want something a bit more useable.

Then I got to thinking back to the good old days, before the handgun ban. One of the members of our club purchased a Uberti interpretation of the Remington over and under derringer, chambered in .45 Colt. There seemed no sensible reason at the time but that little gun earned its keep, from the entertainment point of view, in several stages of British Western Shooting Society (BWSS) competitions held at Mattersey. Boy, was it a handful to shoot, but hey, it was fun and that’s what it’s all about. So maybe this pepperbox will find its way into the hands of one or two Cowboy Action Shooters (CAS) to provide some entertainment in their competitions.

Percussion pepperboxes were the predecessors of the multi-shot revolvers that were so popular in the mid 19th century on both sides of the Atlantic. They were relatively small, so could be easily carried in a pocket and the threat of five or six shots would deter many a would-be villain, especially as it was possible that more than one ‘barrel’ would be discharged at once, thus increasing the chance of serious injury or death at close range.

It is possible that these guns were the stimulus for the introduction of this new model, or perhaps the Pietta designers took their inspiration from the small Apache pinfire revolver which is not too far away from their design, albeit in a breech-loading configuration. Perhaps the most likely stimulus was examples of original percussion revolvers, altered back in the day as ‘hideout’ guns, with the barrel removed and cylinder retained in exactly the same way as the Pietta. Whatever its raison d’être, this revolver is not going to fly off the shelves and fill the Pietta coffers, but there may just be enough folks out there with sufficient imagination to warrant its introduction.

The frame and grip straps on this pistol are simply those that are found on Pietta’s reproductions of the Colt 1851 and 1861 model Navy revolvers. This is a time-proven arrangement that went on to be the basis for Colt’s iconic Single Action Army (SAA) revolver, with the brass straps of the percussion models being replaced by steel. The SAA is still in production today at Colt, in the same configuration that it was in 1873, so there has to be something right about it.

The cylinder, barrel and loading lever grouping of the Navy models is replaced by an elongated six-shot plain cylinder, which sits on the original arbour. The end of the arbour has been drilled and tapped to take the short cylinder retaining screw. The head of this screw has a very narrow slot for a driver and, being extremely tightly screwed down at the factory, could be easily damaged unless due care is taken when removing it. I placed the frame in a vice to make sure my screwdriver did not slip while exerting the necessary pressure to break the screw free. I would advise during use that the screw is just finger tightened and checked regularly while shooting. There is about 11mm of thread on the screw, so it is unlikely to come out if you keep an eye on it. You just need to be aware that the screw keeps the cylinder backed up to the recoil plate, so needs to be fully home.

The cylinder has an overall length of 78mm, which is some 32mm longer than the original Navy version, and at 457-grams (a shade over 1lb), around 80% heavier. Given that the pistol weighs in at almost exactly 1kg, you will see that 45% of its weight is in that cylinder, and despite the overall length being quite short, it still feels front heavy.

The cylinder, along with the trigger and screws, is black and has a high gloss finish. The frame and hammer have a colour case finish and exhibit a pleasing mixture of greys, tans and blues. For some reason, the hammers on these revolvers never seem to have the gloss finish that the receivers show. The hammer shows the absolute minimum of ‘checkering’, consisting of half a dozen shallow grooves cut laterally across its tip, but still manages to offer ample grip for cocking. The trigger guard and backstrap are polished brass and all of the edges are crisp, with the brass to steel fit being generally very tight and smooth. The walnut grips seem to be oiled and fit the straps well, with only the slightest hint of raised edges. The package is well put together and despite its quirky looks, feels like it should get the business done at close quarters. Whether or not you can hit anything past a few feet could be another matter.

Essentially what we have here is a revolver with six smoothbore, 2.5” barrels, so we are going to be looking at large targets at very short range. Checking out a couple of videos on Youtube shows that ‘accuracy’ is not a word associated with this pistol! I would normally load a .36 calibre revolver with around 20-grains of fine black powder, but this cylinder gives you the option to experiment a little. I was not, however, tempted to go down the route of one American shooter who loaded each chamber with two patched balls above his powder!

I decided to begin with a 20-grain charge of Henry Krank fine black powder above a .375” lead ball, the two separated by a soft wax ‘cookie’. The cylinder obviously has to be loaded off the gun so I placed a suitable piece of wood dowel into a plywood base to hold the cylinder upright. There are a couple of weird and wonderful contraptions on Youtube for this task but for a one-off test I just used another piece of dowel to hammer the balls into place. Percussion caps were standard Remington No. 11. The target was a blank piece of paper about 24”x 18” placed around 10m from the gun.

The lack of a front sight proved a handicap even at this short distance and after a couple of dozen shots, the paper looked like it had been peppered with buckshot from a 12-gauge! One hand or two, standing or sitting, it made little difference to where the shots landed. As a form of self-defence back in the day these guns might well have proved effective across a card table, but greater distances would give your adversary a bit of a chance to retaliate. While I have used this powder charge in a .36 calibre revolver for many years I was surprised at how much the noise was amplified from this little gun. Perhaps some of this was due to being indoors in a booth but it did seem excessive.

The cylinder retaining screw was only finger tight and it did begin to back out after six shots. Had Pietta used a bit of knurling on the screw head, as in the photo of the original cut-down Colt Navy, it would have been a help. I also wonder why they did not use a left-hand thread, which would have eliminated the problem. I guess everything comes down to cost.

Would I but one of these pistols? Definitely not as I have no use for one. However, harking back to the memories of the Uberti derringer, I can see where a CAS club might have one on hand to make some stages a bit more interesting.