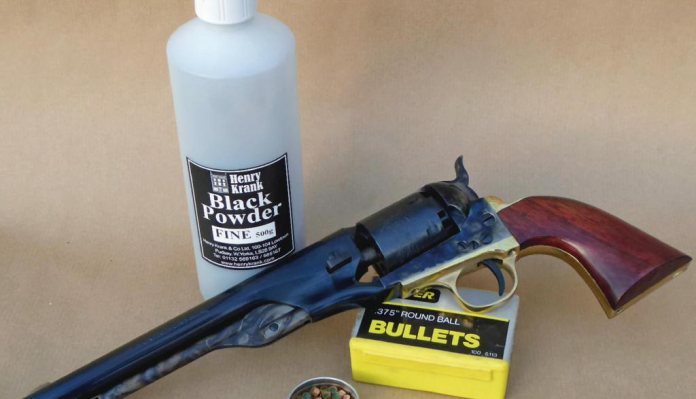 My introduction to ‘old’ guns came from the late Brian Bailey, a collector and student of everything Colt. His passion and enthusiasm for the marque rubbed off on me, along with a smattering of his knowledge. Over the years, I have shot every Italian reproduction of Colt’s line of percussion revolvers, including the shortlived, Palmetto Roots. I have also bought and sold many examples of the originals, the Paterson, Walker and Dragoons being the exceptions, simply because of the prices. In my opinion, Colt has not made an ugly pistol, even the Roots has a certain charm, but the 1861 just seems to stand out from the rest. Perfectly proportioned, the round barrel is an improvement on the 1851’s octagonal version and the balance is perfect.

The revolver does not draw its name from the fact that the U.S. Navy purchased several thousand examples, nor from the naval roll engraving on the cylinder, showing a representation of a fight between the navies of Texas and Mexico (the same scene is on the 1860 Army cylinders). For whatever reason, it was the practice back in the mid-19th century for manufacturers to name their .36 calibre revolvers as Navy or Belt models and the larger, .44 calibre versions as Army or Holster models.

Colt introduced their first Navy size revolver in late 1850 and the US Ordnance Department tested the pistol, along with various others, the pistol being beaten in the tests only by the larger Colt Dragoon Holster model. The Navy revolver was a six-shot single-action model with a 7.5” octagonal barrel and throughout production (which ran until 1873) no other barrel length was offered, despite the ‘sheriff’s’ models that are now available. Nor were there any .44 calibre Navy revolvers made.

The steel frame, along with the hammer and loading lever, were case hardened, while the back strap and trigger guard were brass. Grips were one-piece walnut. In 1861, the new model Navy was introduced using the frame, grip and internals of the 1851, but with a round barrel, still 7½”, and a new loading lever, styled on the one fitted to the .44 calibre Army revolver which had appeared the year before. This new ‘creeping’ lever system used pins on the lever that located in notches under the barrel, as against the simple hinge arrangement of earlier pistols.

While the 1851 Navy had appeared, along with its smaller brother the 1849 Pocket revolver, at a very opportune moment for Colt, the discovery of gold in California, this new pistol came at the outbreak of the Civil War. The production of small arms was geared up to provide guns for the military who, in general, preferred the larger .44 calibre, with the .36 calibre revolvers purchased only in time of shortages of the Army models. Thus, the success of 1851 Navy revolver, with over 215,000 being turned out, was not repeated with the 1861, and less than 39,000 had left the factory when Colt ceased production of percussion revolvers in 1873.

All in the details

From the very first Paterson examples, Colt revolvers had an illustrated scene rolled onto the periphery of the cylinder and today’s Italian manufacturers are repeating the process on their reproductions. The design is engraved in reverse on a steel plate and the cylinders are rolled over the plate under pressure to transfer the pattern. Today’s models have minor differences in the scene itself and some of the wording, presumably to prevent these guns from being aged and passed off as originals, but the overall effect is still pleasing.

The Navy scene on this example is clear, with the engagement date easily readable. Also included is the notation that the scene was originally done by W.L. Ormsby, a New York engraver famed for his work on banknote designs of the period. Overall blueing on the barrel and cylinder is good but some feint polishing marks are visible on the barrel lug. The frame is a ‘4-screw’ version, with provision for the fitting of a shoulder stock via the extra screws in the frame and the cut-outs in the recoil shield, along with the recess in the base of the backstrap.

All edges are well defined and the fit of the metal parts to one another is excellent. The one-piece walnut grip fits well to the brass straps and I find the size of these grips just right. They are about 1/4” shorter than the 1860 Army model. The wood has more of a matte oiled-look finish than the high gloss on the similar revolver from Uberti.

The ‘catch and latch’ arrangement for retaining the loading lever in place is used on the majority of Colt-style percussion revolvers and this one was an extremely tight fit. The catch wings have light knurling and the lever itself was quite stiff to operate. The major parts of the revolver are held together by the wedge, or ‘key’ as Colt originally called it, passing through slots in the barrel lug and cylinder arbour, with the two major parts lining up via a pair of pins on the frame locating into corresponding holes in the barrel lug. I found this wedge had been enthusiastically hammered home and was released only through an amount of force I would rather not use on someone else’s firearm!

Sights are as used on all of the Colt open frame percussion revolvers, with the rear being a v-notch cut into the top of the hammer. The front sight is a white metal blade soldered onto the barrel. This is an improvement on the brass cone used on the 1851 model.

In 1850, Sam Colt had patented his ‘safety’device for this type of pistol whereby, with the hammer at half cock, the cylinder could be rotated to line up the hammer with one of six pins on the rear of the cylinder, so that when the hammer was gently let down, the pin located in a slot in the hammer face, thus preventing the cylinder from turning. This action would prevent the gun from discharging if dropped.

A couple of decades ago, I purchased a used example of this pistol for £50 and it served me well for around 10 years, being the last unaltered percussion revolver I owned. Despite those who say these Colt ‘open top’ designs are weak, I would probably buy this model again should I need a muzzle loading revolver.

Whilst not tack-driving guns, some very respectable results can be obtained by those who choose to use them for competitions. A check on the Muzzle Loaders Association of Great Britain (www.mlagb.com) will show you when and where their events are held, along with the rules of the game. Not as prevalent as they were on club shooting lines, they can still be seen making smoke whenever the British weather permits, albeit generally for fun rather than with any serious competitive intent.

My load of choice for this model is 25-grains of Henry Krank fine black powder behind a .375” round lead ball, with a thin lubricating disc – a mixture of beeswax and candle wax – in between the two. My choice of percussion cap is Remington and the No. 11 was used on this occasion. This load is very comfortable to shoot and provides reasonable accuracy at the 25 yards that I tend to shoot these guns.

Loading is done on the gun and I prefer to hold the pistol in my hands, while others use some kind of stand placed on a loading bench. Methods of loading may differ too, with some dispensing the powder in all six chambers then adding the balls one at a time. I load the first chamber completely with powder, wax disc then ball, press it home and leave the loading lever down while I fill the next chamber. This way, the cylinder is locked in place for the loading sequence.

As mentioned above, the loading lever was fairly stiff and I only noticed a slight easing of this in a little under 100 shots. The hammer was easy to cock and the pistol locked up very tightly. There was no creep in the trigger and it broke crisply with not too much effort. I did experience one ‘cap in the hammer channel’ but tipping the gun upside down cleared it. The number of shots you can get off with black powder before the cylinder begins to bind with fouling tends to vary between individual guns. This one managed around 40. It’s no big deal to break the gun and wipe the cylinder arbour and its bore, adding a bit of grease before re-assembling.

Clean-up back at home is done using nothing more than boiling water with a little detergent, making sure every part is completely dry and giving it a very light coat of oil before putting it away. As this was not my gun, the trigger guard and backstrap were removed to clean the innards. I would normally do this every other outing.