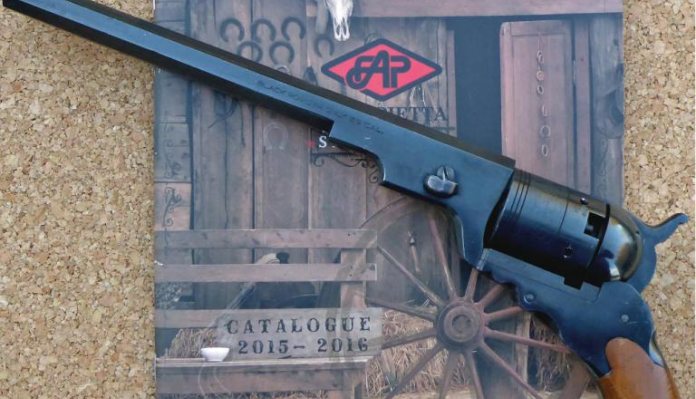 Sam Colt never claimed to have invented the multi-shot pistol with a revolving cylinder but merely to have improved it with his ideas. For several years he struggled to find enough money to pay gunsmiths to make models of his revolvers, but after several unsuccessful attempts, he finally had one which seemed like it might make the grade. In 1835 he took out a patent in England and the following year, on the 25th February, he was granted his first American patent. With the help of friends and family, he scraped enough money to form the Patent Arms Manufacturing Company in Paterson, New Jersey in 1836. For the use of his patent rights, Colt was to be paid a royalty for every pistol sold and it was agreed that should the company fail, the rights would be returned to him.

In addition to rifles and shotguns based on the same principle, revolvers were manufactured in .28”, .31” and .36” calibres, with five-shot cylinders and a variety of barrel lengths. Although the arms were of superior design to anything else around, by the end of 1837 no sales had been made. Sam took to the road to act as a travelling salesman but orders for anything other than one or two pistols were not forthcoming. The lack of orders for the military prevented any further investment in the company and when a glimmer of hope appeared in the form of an order for fifty pistols from the State of South Carolina, it was quickly dashed as the order was cancelled when the company could not deliver on time. Add to this the irresponsible spending by Colt as he tried, unsuccessfully, to ‘bribe’ potential customers with gifts or lavish entertainment, and the light at the end of the tunnel was growing dimmer. A brief respite came with the war against the Seminole Indians in Florida, which saw the sale of pistols and rifles to the Army. Problems with the arms themselves and the unfamiliarity of the workings by the soldiers rendered many guns unserviceable. Towards the end of 1843, with the loss of payment for these arms, the Paterson factory closed its doors and the remaining assets were sold by auction in New York. Sam Colt’s hope of a firearms empire was, for the time being, put on hold.

Possibly because of their quirky design, reproductions of the Colt Paterson are relatively scarce among shooters and re-enactors. The five-shot capacity would preclude them from many shooting competitions and their place in the historical time frame makes them unattractive to the majority of those who portray events from the American West. The difference in price between this model and the more readily available Navy revolvers may also play a part in the Paterson’s exclusivity. Over the last few decades, both Uberti and Pietta have sporadically produced copies of this pistol, but it now seems as if it may have been dropped from the Uberti line, leaving Pietta as the sole manufacturer. Add to this the erratic availability from Italy – Henry Krank does not have any new guns in stock at the time of writing – and owners of Colt Paterson clones form a rather exclusive club.

It is several years since I last saw new Patersons at Henry Krank and at the time I had an enquiry for one from a customer, but it eventually fell through. Someone down there obviously remembered my enquiry, as when this pre-owned gun came into the shop it was put aside to see if I was interested. Years ago I would have bought it because I like the model, but these days I’m cutting down on the number of guns I have rather than buying more, but I still thought it would make an appealing article and might encourage others to appreciate and possibly purchase this unusual revolver, as and when it again becomes available.

The model we have here is a clone of the Colt No. 5 holster model, sometimes called the Texas Paterson because of its use in a fight between fifteen Texas Rangers, each one armed with a pair of these pistols, who routed a group of around eighty Comanche Indians, killing half of them.

The basic design is that which prevailed on the vast majority of Colt’s percussion revolvers up to 1873, the exception being the 1855 Roots Sidehammer model. It comprises of a barrel which is pinned to the frame with a wedge running through the cylinder arbour. The design has often been called weak, but the very large number of Colt pistols built in this way would indicate it was more than adequate.

This is a .36” calibre model with a 9” barrel, and the lack of a fixed trigger and trigger guard takes nothing away from its graceful lines, in my eye made all the more pleasing through the omission of a loading lever, which was a feature on later models. All of the metal parts are finished in a deep black gloss and for a 24-year-old pistol, it is in remarkably good condition, with a few minor dings. The one-piece (walnut?) grip shows traces of the original varnish. The edges of the metal are still reasonably sharp and all parts fit together well. The sights set the pattern for all subsequent Colt percussion pistols with a v-notch cut into the hammer. The fronts varied slightly and this one is a small brass blade screwed or soldered into the top barrel flat.

Apart from a few with fluted cylinders, Colt percussion revolvers had a scene rolled on to the cylinder surface, in this case, a stagecoach hold-up, which Pietta has copied very well. When the hammer is cocked, the cylinder is turned via a hand which rotates an internal collar around the cylinder arbour. The collar has a stud which locates into a slot in the rear of the cylinder. This, along with the trigger mechanism, is a rather complicated arrangement which was simplified on later guns. Also added to later models was one or more pins on the rear of the cylinder which located in a notch in the hammer face and acted as a safety device. The locking notches on the cylinder are circular with a corresponding bolt, and the cylinder had some lateral movement whether on full cock or with the hammer down, probably due to the top of the locking bolt being more conical shaped than cylindrical.

The pistol is powered by a V-spring rather than the flat spring on most of the later guns, and this one is very strong, not only when cocking the revolver but also making for an extremely heavy trigger pull. When the hammer is drawn to full cock the trigger drops down out of the frame to an angle of about 45°. It has to be pushed back up manually, but this can only be done when the hammer is at rest.

You could be forgiven for asking how this pistol is loaded without an attached rammer. Sam Colt’s solution was to provide every pistol with a combination loading tool which served as a rammer, nipple key, screwdriver and nipple prick. It could also be used to drive out the barrel retaining wedge. Pietta also offers this tool although today it is an optional extra. An alternative solution is to use one of the loading stands used for today’s percussion Peacemaker pistols. To use the combination tool, first drive out the wedge and remove the barrel. Positioning the hammer on halfcock you place the screwdriver end of the tool into the wedge slot in the arbour, and then you can load as you would with an attached rammer. There is no cut-out on the right side of the recoil shield so presumably, the percussion caps have to be seated before replacing the barrel. The top of the barrel is marked ‘Texas Paterson Cal. 36’ with the rest of the obligatory Italian marks on the barrel side flats and the proof marks on the frame. A tiny Pietta logo is stamped on the base of the butt strap along with the serial number.

The lockdown prevented any shooting of this revolver but from previous experience of a Uberti version I know that they are not exactly tack drivers, and the extremely heavy trigger on this model, by far the heaviest I have encountered on a revolver, would definitely rule out any accuracy test. Besides which the nipples are a bit mashed, possibly through dry firing.

Seeing these pistols available on the Pietta website (there is a very nice deluxe version shown too, obviously at a premium) would indicate that they are still available, so if interest was there, I’m sure Henry Krank would try to get one or two. Or you could get in touch with the shop after reading this and if you are lucky this pistol might still be available, unless I weaken!