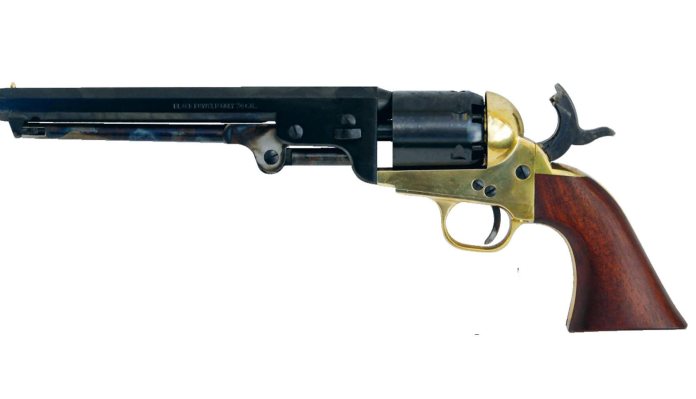 A glance through the Henry Krank catalogue will show almost 50 variations of 19th-century American percussion revolvers available in the UK from Pietta of Italy. Add to this the deluxe versions of the same revolvers, which are advertised on the Pietta website, and there is something to suit all tastes and pockets. The principal offerings from the major manufacturers, such as Colt and Remington, are well represented but Pietta has also added a few hybrids of these models into the mix. Items such as the Colt 1860 Army model and the Remington New Model Army were never produced in the 19th century with brass frames, but are offered to appeal to those who feel that brass frames equal Confederate production. True, the South did produce a number of brass-framed revolvers, out of necessity rather than choice, as steel was in short supply at the outset of the war. It is also true that they based the majority of the handgun production on models used by the Union, but the above-mentioned two were never made, with brass frames or otherwise, by the South. Nevertheless, Pietta is to be congratulated on making what might be obscure models to some, but those wannabe Johnny Reb soldiers among re-enactors will surely appreciate the Italian efforts to render their portrayal that little bit more authentic, and shooters who choose these models may get more than a little attention on the line.

Pietta’s manufacture of ‘Confederate’ revolvers is not the first time that Europe has supplied Southern sympathisers with arms. During the war between the States, the South was at a distinct disadvantage when it came to the manufacture of small arms. Pre-war, the major arms manufacturing plants were all in the North, meaning the breakaway states had to more or less start from scratch to outfit the troops. It was not long before they realised that European countries were willing to attempt to run the Union blockades to supply them with weapons.

Jean Alexandre LeMat was born in France in 1821 and he studied for the priesthood before a change of mind saw him qualify as a doctor. He emigrated to America in 1843 and a few years later married the cousin of U.S. Army Major, Pierre Beauregard. Alongside his medical work, LeMat was a bit of an inventor and his cousin Pierre often bankrolled these ventures, the foremost of which was a novel 10-shot revolver, for which he was granted a patent in 1856. A 9-shot cylinder of .42” calibre used as its arbour a .63” calibre smooth bore barrel which could be loaded with buckshot, and from which the pistol’s nickname ‘The Grapeshot Revolver’ was derived. A handful of prototypes were made in Philadelphia, before production was moved, first to Paris, and then to Liege in Belgium. At the outbreak of the Civil War, the Confederate States placed an order for 5000 revolvers, but production was slow and estimates place the total output at less than 3000 by the war’s end.

There are three models on the Henry Krank website. There are minor variations in the three guns depending on whether you want the Cavalry, Army or Navy version. Calibre and barrels are the same, the grips are chequered and the metal parts are high gloss black. The fit and finish are excellent. With a price tag in excess of £1200, they will not be everyone’s choice but will certainly get you some attention.

With limited resources and an ever-changing base for production, it was imperative that the South saved money wherever possible in arms manufacture. Although the Dance brothers of Columbia, Texas had no experience in arms manufacture, at the beginning of the war they offered their services to the Confederacy to turn out revolvers. They came up with a novel idea to cut down on the cost by producing the vast majority of their pistols without a recoil shield on the cylinder, reducing the overall width of this part and allowing more cylinders from a given billet of steel. Revolvers were produced in .44 and .36 calibre, with a barrel profile similar to the Colt Dragoon pistols. Problems beset the venture from the start and it is estimated that no more than about 500 revolvers were delivered.

Pietta has produced the pistol in .44 calibre only, with an 8”, part round, part octagonal barrel. The frame and loading lever are case coloured, with a brass trigger guard and backstrap. All other metal parts are blued, with the grip being one-piece walnut. Sights are as per the Colt models, with a v-notch in the hammer at the rear and a front blade soldered to the barrel. It is some years since I reviewed this model and I note that at the time, the example I had was fitted with a square-back trigger guard, rather than round as per the originals. The fit and finish were generally good and at the time the pistol performed well, with only one instance of the dreaded ‘cap in the hammer channel’ that sometimes besets these open-frame revolvers. At the time of writing, the Henry Krank website shows one Dance revolver in stock for £352.00.

From pikes to guns

The town of Griswoldville in Georgia, USA, is named after Samuel Griswold, a businessman who produced, among other things, cotton gins. Although he was a Northerner, from Connecticut, less than 12 months into the Civil War he offered to produce pikes for the Confederate Army and this venture quickly morphed into the manufacture of percussion revolvers in support of the cause. Based on the Colt 1851 Navy revolver, but with a dragoon-style barrel, they were 6-shot models of .36 calibre. Made for only a couple of years, around 3,700 pieces were delivered before the factory was completely destroyed by Union forces in November 1864, making the company the CSA’s most prolific supplier of handguns. Their quality was also said to be superior to their native rivals.

Some years ago, Pietta offered a Griswold & Gunnison pistol in their inventory but it looks to have been discontinued. However, a look at their current line-up shows it is still there under a different name. It is now listed as the ‘Colt 1851 Confederate’ and is offered in both .36 and .44 calibres, the latter with a ‘stepped’ cylinder much like the Colt 1860 Army model. The cylinder and 7½” barrel are blued, with the loading lever and hammer being case coloured. The frame and grip straps are polished brass and a one-piece walnut grip is employed. I have not had the opportunity to shoot this model (yet) but an examination showed the fit and finish to be up to the usual Pietta standard. The pistol is listed in the Henry Krank catalogue as “only 1 left” with a price tag of £239.00.

The final pistol in Pietta’s confederate selection is the .36 calibre Spiller & Burr revolver. It is a 6-shot model with a 6½” barrel and design characteristics drawn from three other revolvers of the era. Using a solid frame like the Remington, it featured a Coltstyle mechanism and a loading lever arrangement borrowed from the Whitney Navy revolver.

The one-piece frame and grip strap, with a separate trigger guard, is polished brass and the hammer is case coloured. The rest of the metalwork is blued. The grip panels are two-piece walnut and they are retained by a screw and brass escutcheons.

The original order from the C.S. government was for 15,000 revolvers but production problems and the fact that the facility was moved in the face of Northern advancement, meant that this was always going to be very optimistic. Even though the government purchased the company in early 1864, it is estimated that less than 10% of that original order was delivered before the end of the War.

I have tried this Pietta on a couple of occasions and have been pleased with its ease of use. Particularly gratifying is the cut-out in the frame that prevents over-rotating the cylinder during the loading process, until the ball is fully seated. Slightly smaller than the Colt Navy revolvers, it may not suit those with larger hands. This model is listed by Kranks as “out of stock” but with a price of £278.00.

The models listed here are seldom seen on club shooting lines but will likely be of greater interest to re-enactors, where striving for authenticity is usually – though not always – paramount. The low or non-existent stock levels are not confined to this group of pistols. Contact with Uberti earlier this year indicated that the COVID lockdown was still having an effect and they were trying to catch up. You will appreciate that by far the biggest market for these reproductions is the USA and they will take priority over deliveries to our shores, but hopefully, things will eventually get back to normal. As always and especially in the current climate, check out the latest prices before making a commitment.