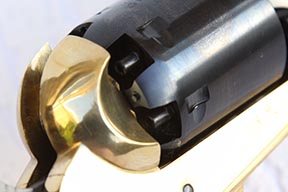 To the student of nineteenth century American firearms, some of the offerings from Pietta can be a little annoying to say the least. Quite why they choose to produce revolvers which are not representative of anything that was ever manufactured is a bit of a mystery. Perhaps their persistent use of brass for frames is a cost-cutting exercise, much as it was with the Confederacy, as it is presumably cheaper than steel. While many of their brass-framed products, such as the Colt 1860 Army and the 1858 Remington, are merely figments of the designer’s imagination, the example we have here is a good representation of a rare, Southern-made Civil War revolver.

The Southern states were at a distinct disadvantage at the outset of the American Civil War as all of the major firearms manufacturing plants were in the North. As the blue-uniformed troops pushed southwards, the hastily-built Confederate armouries were forced to move location until they were finally, one by one, overrun. If you have more than a passing interest in the weapons used in the conflict you will be acquainted with names like Leech & Rigdon, with manufacturing plants first in Mississippi and then Georgia, or the Dance brothers from Texas. Among the lesser known producers of arms for the Confederacy is the firm of Schneider & Glassic from Memphis, Tennessee. What little is known of their activities centres around a few newspaper clippings and the 1860 Memphis City Directory, in which they are listed as “Schneider & Glassic, guns, pistols, etc., 20 Jefferson Street.”

In December, 1861 they are given a glowing testimonial in the Memphis Daily Appeal newspaper, which describes their revolver as “a beautiful weapon, not inferior to the Colt’s make in any particular.” The pistol was a .36 calibre model, almost identical to the Colt Navy but with a brass frame.  By March of 1862 Memphis had fallen into the hands of the advancing Union troops and Scheider & Glassic were out of business. There are no production figures for the S&G but their contribution to the Southern cause can have been miniscule at best, as only three known examples of the pistol survive today.

Many years ago there was a considerable difference in price between Pietta percussion revolvers and their Uberti counterparts, with a corresponding disparity in quality. The price difference has all but disappeared on like for like models, and having recently handled a number of pistols from both companies I can say that Pietta have made great strides in catching up with their rival’s quality, so that now there is nothing to choose between products from the two companies. If you look hard enough you can find fault with any firearm, or other commodity for that matter, and the nearer you get to perfection, the more of your hard earned cash you will have to fork out. Given my previous statement about the improvement in Pietta workmanship, it was a little disappointing to find this particular revolver had one or two minor flaws which I feel should not have been allowed out. Whoever was on quality control that day missed this one.

The pistol is a good copy of the S&G revolver with a brass frame, trigger guard and backstrap; the barrel, cylinder, wedge and all of the screws are black with case colours on the loading lever, hammer and trigger. The black has a nice gloss and the edges are particularly sharp with just a little over polishing on a couple of corners. The case colours on the loading lever are very well executed. The metal-to-metal fit is very good but the wood grips are slightly over-sized, a common fault on all of the Italian offerings, showing that they were not polished on the pistol.

Initial strip down showed the cylinder to be a very tight fit on the arbour, with indications of a little metal being removed from the rear of the latter, presumably to try and ease the problem, or perhaps to assist the operation of the hand. There were also very distinct machining marks on the recoil shield. On reassembling the pistol it was found that the loading lever was a tad too long and needed to be forced into position. Given my experience with Pietta products over the last couple of years I feel confident in saying this is a rogue example and probably qualifies as a classic “Monday morning” product.

All Pietta pistols now come with an excellent instruction booklet which would prove to be a good primer for those new to this type of shooting. Subjects covered include safety, loading, cleaning and storage along with parts diagrams of the various models. Whilst I accept that all firearms manufacturers place great emphasis on safety, and rightly so, I would question Pietta’s loading data for muzzle loading revolvers. Their stated maximum load for the .36 calibre (apparently steel or brass frame) is 12 grains of fffg powder, which seems a little anaemic to say the least. My standard load for my steel-framed revolver is 18 grains of Henry Krank’s fine black powder and for this review I dropped it ten percent in consideration of the brass frame, using the same .375” lead ball and home-made grease cookies. The capping cut out in the left side of the recoil shield was a shade smaller than other revolvers I have used and capping by hand was a little fiddly, but no problem when using a capper.

The weight on the main spring was fairly light and the pistol cocked smoothly, with minimal cylinder fore and aft play and no lateral movement at full cock. The trigger showed no creep and let off was around five pounds. Sights are the standard Colt-type, v-notch rear in the top of the hammer with a small brass post screwed into the top barrel flat at the front and are adequate for anything other than precision target work.

Apart from the usual Colt malady of the odd spent cap falling into the hammer channel the pistol performed very well with mild recoil and shooting a few inches above point of aim at twenty five metres. Fouling became a problem earlier than I expected, with the cylinder beginning to bind after about twenty shots, but this could probably be attributed in part to the aforementioned tight fit at the start.

Because of the limitations in one of the indoor ranges that I use, there are times when I have to use one of the black powder substitutes in my steel-framed revolver, with a noticeable increase in recoil. I am not sure that I would want to shoot the same powder in this brass-framed example. This Pietta is a capable revolver and for those who like the look of the brass frame, and I know there are more than a few, and who also wish to be period correct, then this is one of the very few examples that will fit the bill.