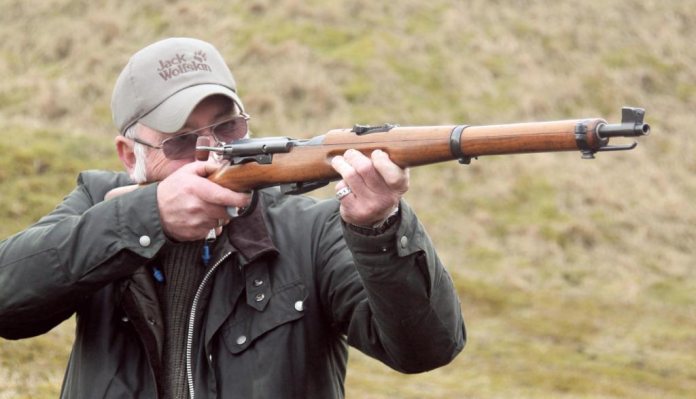 Up until a couple of months ago, I had not heard of Otto Lehmann, a Swiss citizen who, like all Swiss males over 18 would have done his military conscription. He lived in Zurich and I now own his Schmidt Rubin K11 carbine. When Otto received his call up papers I do not know, but his rifle was manufactured in 1926. He would have done 18-weeks basic training, plus a little more specific instruction, depending on the position he was allocated, with a total minimum time of 260 days. At the end, he was given his rifle and a sealed box of ammunition, to be kept at home in case of national emergency. He would be required to attend refresher courses two or three times a year, which would probably include a little target practice with his rifle. The ‘P’ next to the serial number on this carbine indicates that the rifle was purchased, likely by Otto, at the end of his military obligation.

When the Model 1869 Vetterli rifle was adopted by Switzerland, they became the first country to use a magazine-fed repeater using a self-contained metallic cartridge. The 10.4 x 38mm was a rimfire and fired a round-nosed lead bullet of around 330-grains. Designed by Friedrich Vetterli, the rifle used a modified locking turn-bolt system of the Dreyse needle-fire, combined with the tubular magazine and elevator mechanism of the Winchester 1866 lever-action. The 10.4mm cartridge was considered small by military thinking of the day but it was felt that its 12-round capacity and rapid fire ability would make up for this. Soon after production began, the magazine capacity was reduced to 11-rounds. At 52-inches long with its 33-inch barrel the Model 1869 weighed in at a shade over 10.25lbs.

By the mid-1880s, the Vetterli was coming to the end of its useful life, the short effective range of its large lead bullet rendering it obsolete as a frontline infantry weapon. At the beginning of the decade, Major Eduard Rubin had developed a 9mm lead bullet with a copper jacket, which would be able to handle the high-pressures of the new breed of military ammunition, as well as providing increased velocities. Continuous testing proved that the bullet would perform better in riflelength barrels when reduced to a diameter 6.5 or 7.5mm.

Rubin also designed a new rifle, this being a modified version of the existing Vetterli pattern but with a box magazine with a capacity of 7-rounds. Coincidently, Major Rudolf Schmidt of the Bern Federal Arsenal was studying military rifles in use by different nations and came up with a design of his own, using a modified version of the Mannlicher straight-pull bolt mechanism, with a 12-round box magazine similar to that used on the Lee rifle. This was finally chosen and mated with Rubin’s new 7.5 x 53.5mm centre fire, rimless, bottleneck cartridge to become the Model 1889 Infantry rifle, again cumbersome at over 51-inches! A short rifle at 43.5-inches long was introduced a year later, followed in 1906 by the Cavalry Carbine, an inch or so shorter.

1911 saw the introduction of a new, more powerful cartridge, the GP1911 (Gewehr Patrone or rifle cartridge), necessitating a slight remodelling of the rifle’s receiver to handle the increased pressure of the new, 7.5 x 55cm cartridge. It used true smokeless powder for the first time in a Swiss military cartridge. Both a full-length infantry rifle and a carbine were manufactured for the new GP1911 and showed a new stock with scant pistol grip akin to the Enfield SMLE, a 6-round magazine and redesigned sights. As a cost-cutting measure, and with the ‘waste not, want not’ attitude of most military departments of the time, a large number of earlier obsolete rifles were modified to shoot the new cartridge.

The Model 1911 eventually morphed into the more famous K31 with its shorter, re-worked bolt. This new model replaced the Model 1911 rifles and carbines and was itself made obsolete when the Swiss Army began re-equipping with the selective fire, Sig SG510 or Stermgewehr 57 in 1958.

The words SWISS MADE indicate quality manufacture and it could be said that the stamping of the Swiss cross on many parts of this rifle (I’ve found 19 up to now) signify the same attention to detail. Suffice to say; this is a well put together piece of kit!

The Schmidt Rubins are instantly recognised by their large cocking ring at the rear of the bolt and the cocking handle protruding at right angles from the receiver. The receiver is a twin-tube design, with the bolt in the larger and the operating handle on the right in the smaller. The bolt does not rotate but is enclosed in a sleeve, which has two locking lugs at the front, and these rotate into matching cut-outs in the receiver; resulting in a fast and positive action. When the rifle is cocked, it can be placed into ‘safe’ mode by pulling rearwards on the cocking ring and turning it 90° clockwise. The bolt has a last round hold open facility and though the magazine is detachable, feed, like many rifles of this era, is from a stripper clip (6-rounds) that loads from the top. Unusual, is the fact they are made from a form of pressed cardboard, with metal re-enforcing and are very rare today; even more so spare magazines! The nicely curved trigger is a two-stage affair and breaks cleanly at around 4¾lbs. The length of pull (LOP) is short at 12.5-inches, probably done as firing wearing a great coat and webbing will put a good inch on that!

The stock, with its scant pistol grip, top hand guard with fiveinch long finger grooves on either side of the forend, are made from European walnut and fitted with a steel butt plate. Removing this revealed the small piece of paper with Otto’s details. Similar notes will be found in many of these Swiss rifles, provided some previous owner has not removed and discarded them.

For the benefit of mounted troops, the position of the sling swivel positions differ from those on the rifle. The rear is a cut-out and bar set into the left side of the stock with the front being integral with the lower barrel band on its left side. The upper barrel band includes a Mauser-style bayonet mount and a 70mm piling hook with a curled tip. These rods were intertwined to make a more secure tripod when three rifles were stacked together, and the curl reduced the chances of brush or twigs wedging between the rod and barrel.

The rear sight base is dovetailed into a flat-topped ring that fits around the barrel. The sides of the base are marked from 300- to 1500-metres in 100-metre increments, with the hinged leaf having corresponding marks on its top surface. A spring-loaded slide, with its ‘U’ shaped sighting aperture, engages in notches on the leaf to set elevation. The front sight consists of a ring with ears to protect the blade, which itself is dovetailed diagonally into the ring, with windage adjustment made by moving the blade backwards or forwards. Once adjusted at the factory, the blade was staked into place.

I have seen mention of these rifles printing one-inch groups at one hundred yards and see no reason to doubt the fact. On a cold January day at Catterick, using a wobbly box as a rest, I managed to group 5-shots into a circle less than five-inches using PPU factory ammunition. Nothing spectacular I hear you say, but with a bench, a good rest and some hand-loaded ammunition, tighter groups should be easily attainable by a more competent shooter than myself. Feed and extraction were faultless throughout the day. Note empties come up and straight back and can drop 10ft behind you!

The K31, with its shorter bolt, is seen as an improvement on this earlier model, but whichever one you choose, you can be assured of a quality rifle that will perform well. I spotted this example leaning in a corner of Henry Krank’s shop in Leeds but after looking it over decided I don’t need another rifle. It was suggested that I take it for a possible review and after an hour at the range decided that perhaps I did, after all, need one more rifle!

PPU ammo is readily available from Kranks and the calibre is still alive and well, with dies from Lee Precision and brass from PPU and others and of course using a 308 bullet means no problem on components! Equally, most reloading manuals show data.