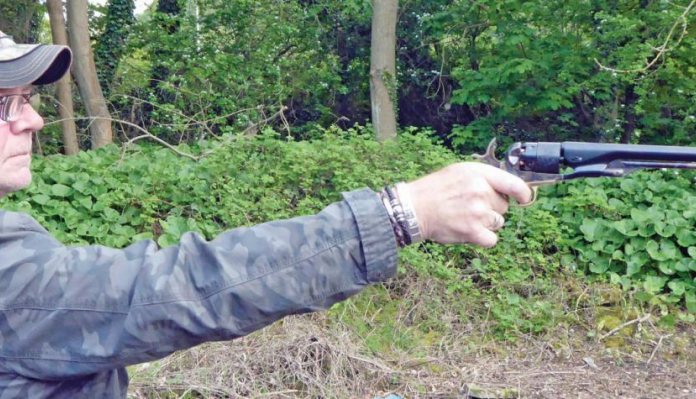 Perhaps one of the longest-running arguments among shooters, re-enactors and collectors, centres on the form and function of the two most popular American .44 calibre percussion revolvers of the nineteenth century; The Colt Model 1860 and Remington’s New Model Army (NMA). As a result of the patent date on the barrel of the NMA, it is usually referred to as the Remington 1858, although it was not introduced until late 1862. I think the Colt is more handsome, while Remington fans will stress the strength of that model with its solid frame.

Both guns saw extensive use in the war between the states, with Colt outselling the Remington by a ratio of about 6:5. Had the war continued much longer, the latter would undoubtedly have garnered the lion’s share, as by 1864 each gun sold was $2 cheaper than the Colt.

While the Colt pattern is regarded by many as being weak, the acceptance of the open-top design through several different models, from 1847 until 1873, saw almost 1 million units being produced.

Such had been the success of their 1851 Belt Pistol (better known as the 1851 Navy) that when a replacement for the Dragoon revolvers was contemplated, it was decided to base it on the smaller .36 calibre model.

The development of a new stronger steel called ‘spring steel’ meant the new .44 model could be made much smaller than its predecessor. The frame and lock-work of the Navy Model were used as a basis, with a larger .44 calibre cylinder being accommodated by cutting out a small step in the frame.

A round, 8” barrel was fitted with a new style ‘creeping’rammer, giving the pistol a streamlined appearance. A new blade sight replaced the post of the 1851 and as this was intended for military use, primarily by the US cavalry, the Navy-size grips were lengthened by ¼” to accommodate all hand sizes and the use of gloves. Grip straps on the American made Colt percussion revolvers had up to this point been made from brass (English made versions used steel), but the new Army pistol was fitted with a steel backstrap.

With the Civil War looming, Colt offered to turn his production over to the Union, an offer that was accepted. The Ordnance Department began purchasing the guns at $25 each, but by mid-1862 this dropped to $14 and stayed at that level until the Colts were succeeded by the Remington NMA in late 1863. After the War, Colt continued to sell the 1860 on the civilian market, as standard models and also as conversions to cartridge breech loaders. In 1873 production of percussion revolvers ceased.

As with all of Uberti’s reproductions, this model is a well-executed and faithful rendition of the originals. The version we have here is one of several options for this model, with the principal difference being the style of the cylinder. In the 19th century, the first batch was produced with a fluted cylinder, but this was quickly changed, for reasons of strength, to the ‘belted’ variety seen here. These latter cylinders, like the majority of Colt percussion models, featured a rolled design around the periphery. In this case a representation of a naval battle between the navies of Mexico and Texas. There are civilian and military versions, with the latter having provision for the fitting of a shoulder stock, which usually sees the frame fitted with a pair of extra screws to aid solidity.

Compared to the Dragoons, weighing in at around 1.5 lbs more, this really is a handsome pistol. The streamlined barrel, along with the cylinder, is finished in a deep black with a smooth finish, showing the attention to polishing before the colour was applied.

The ubiquitous Italian markings are hidden under the loading lever. The cylinder scene is nice and sharp, plus the design shows a very minor difference to the originals, presumably to deter fakers. The originals have a panel running from front to back stamped with ‘COLTS PATENT’ along with all, or part of the serial number. These Italian reproductions are marked ‘PATENT No’ only, again a deterrent to anyone trying to doctor these and pass them off as originals.

A nice touch is the line attributing the engraving to W.L. Ormsby, a New York bank note engraver of the time. The rear of the cylinder has the ratchet for turning and also the safety pins located on the shoulders between the nipple recesses. Any one of these pins can be located in the slot in the hammer face to lock the cylinder in a safe position, preventing a discharge should the pistol be dropped.

The trigger, screws and loading lever latch are also black. The lever, frame and hammer, have a case coloured finish with a mixture of tan/ grey/blue, and although muted compared to some I have seen, is still very attractive. The catch and latch arrangement for the lever is very sharply cut, with the minimum of knurling on the catch, and the lever is held firmly in place during use. There is a cut-out in the right side of the recoil shield and this has a shallow groove to aid capping. The frame on this example does not have the provision for fitting a shoulder stock, but such models are available.

The trigger guard and back strap are polished brass and it is here that we see a variance from the originals, which were fitted with steel back straps. This is not a big deal for casual shooters but re-enactors would likely opt for the steel version. All of the metal parts fit together very nicely but the one-piece walnut grips, with the standard Uberti gloss finish, are a little proud in a couple of places.

As good looking as a gun might be, it’s not much use if it does not perform. Happily, this revolver, as with just about all of the Italian reproductions I have used, does what it was intended to. It is extremely well balanced and those slightly longer grips should provide a good hold for all but the very largest of hands. There is a small amount of not-toosharp knurling on the hammer and the mainspring provides a very nice weight for both cocking the hammer and the trigger pull. The latter breaking very cleanly without any creep. Cylinder lockup is as tight as can be.

Sights are very basic with the standard Colt-style v-notch cut into the hammer at the rear and a white metal blade soldered into the barrel at the front end. I have seen one or two of these fitted less than perfect but this one has been well done. It is not unknown for owners of some models of Colt percussion revolvers to widen the rear notch with a file, but I have not felt the need to do so. I have rarely used one of these revolvers for anything other than paper punching at 25 yards and found the sights more than adequate for this purpose.

Previous use has shown me that I get the results I want from 28-grains of Henry Krank black powder behind a .454” lead ball along with Remington caps for ignition. I also use a small disc made from a mixture of beeswax and candle grease between powder and ball. There are arguments for and against using any type of lubricant in muzzle loading revolvers but this works for me, so I’ll stick with it. I also feel it negates the chances of multiple discharges. This is also the subject of much debate but I can do no more than direct you to someone who has done much more experimentation on this subject than most (see contacts).

In the past, I have tried Hodgdon 777 powder in muzzle loaders but the only advantage I have found is that they run longer without binding. As I’m not a competition shooter it does not warrant the extra cost. Clean up does not take that much longer using the real deal. There may be those whose indoor range does not allow the use of black powder, so should you wish to shoot one of these guns then substitutes are your only option.

I have to admit to being a bit of a Colt fan so if I were looking for a .44 calibre front loader then this would be my pistol of choice. It looks good, it does what I want it to do and it’s well made.