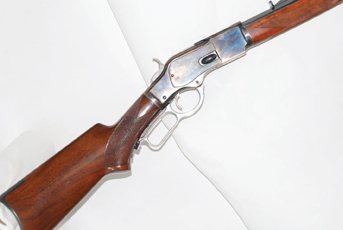 Regular readers will doubtless be aware of my liking of what I consider the best looking Winchester lever-action of all time the 1873. I have owned Uberti’s 1873 Sporting Rifle for over 10-years and used it for Classic events, Cowboy Action and just plain enjoyable shooting. With its straight-hand butt and 24 ¼” octagonal barrel I like the feel and look of this superb recreation of a legendary firearm. The old toggle locking mechanism is not as cutting edge as the more modern designs but it handles pistol calibres easily, which is what it was designed for.

One example of the 1873 I have always liked the look of though never handled is what Uberti calls the Special Sporting. It’s identical to the standard Sporting model with is colour case-hardened action and well blued barrel and magazine tube. Where it differs is in the woodwork as the butt is a pistol grip type and the forend a tiny bit fuller, both are chequered too.  I have only seen this gun in the 24 ¼” length and did not know that Uberti offers this option of what they call the Short Rifle.

The Short Rifle shows a 20” barrel and is available in the Standard Sporting option as described. The Special Sporting is identical to the 24 ¼” version just 4 ¼” shorter. What I like over my 1873 is the improved handling with four inches less barrel and magazine tube out front. It’s no lightweight at 7.9 lbs but points and swings easier and more naturally. The payoff is a reduced capacity from 13+1 to 10+1, which is no hardship!

Calibre-wise Uberti offers the choice of traditional and modern with 44-40 WCF (Winchester Centrefire), 45 Colt (Long Colt) and 357 Magnum. This last will also do double duty as it can also take the slightly shorter 38 Special, as the case is identical apart from the slightly reduced cartridge overall length (COL). With the 38 you should be able to squeeze in another round, a bit academic, but why waste the power and price of 357 Magnum when a 38 will do just as well at normal ranges?

If you’re buying then I’d recommend the 357/38 options as ammo is plentiful, 45 Colt is not a bad choice either, if you want a classic cartridge. The 44-40 WCF is really for the enthusiast as factory ammo is not common and reloading this semi-bottleneck case can be problematic. Equally bullets are .410” and not the .429” of the modern .44.

If you have never experienced the level of quality of Uberti’s historical reproductions you are in for a treat! The steel, colour case-hardened action, hammer, trigger and lever are beautifully finished and each one is unique as to pattern. The blueing is deep, rich and well struck off. The wood is walnut and well matched with a varnish finish, which is nice but be careful as it scratches easily.

The layout consists of a surprisingly short length of pull (LOP) of just 13”, shorter than that of my Sporting Rifle by one inch. The butt ends in a crescent steel plate that locks into the shoulder easily giving good stability in operation. The octagonal barrel is heavy in profile and gives that classic look; equally pleasing is the lack of an all-encompassing barrel band in favour a simple ring that supports the magazine tube. For me this is an elegant solution.

Sights are your typical semi-buckhorn (big C-shaped cut out for fast acquisition with a small U-notch at the base for line up) at the rear, which gives elevation adjustment by a sliding wedge. There is also limited windage correction by drifting as it’s set in a dovetail, though a tiny lock screw has to be undone first. The front is a medium height/width blade in a dovetail and though basic you can fine tune these easily enough and at 50-yards inch groups are possible. Uberti also offers a more precise tang/tunnel aperture system.

The 1873 loads through a right side gate in the action like most tube-magazine lever-actions, but uses a fixed-length, brass vertical feed block as opposed to a hinged lever like the Winchester 92/94 and Marlin 1894. This is COL sensitive as if the round is too long it will go into the magazine but when released backwards into the feed block the nose of the bullet will not clear the mag tube and jam the action. So be aware.

Equally the tube magazine stacks the ammunition bullet to primer, so it’s essential to use flat-nosed bullets to stop a chain fire, where the recoil would push the nose of a pointed bullet into the primer and set it off. You might get away with it with a round nose, but I would not risk it. Equally if you are reloading then the primers must be seated below the pocket by at least 0.010” too, which is common practice anyway. For the test I used Prvi Partizan (PPU) 158-grain, 357 Mag and 38 Special, also imported by Henry Krank & Co Ltd and it’s good stuff with Boxer-primed cases so reloadable too!

The major differences between the earlier Winchester 1866 (Yellow Boy) and the 73 are more down to materials as the 66 uses a brass action and the 73 a steel one (iron back then). The main change is the sliding dust cover of the 73, which for its day was quite an advanced feature. This is closed manually but automatically opens as you cycle the action.

The operating lever is slightly curved to conform to the pistol grip on the Special Sporting and also features a safety interlock plunger. Here the lever must be squeezed up against the grip to unlock the trigger; simple and effective. There’s no manual safety instead the hammer offers ½ and full cock notches, the former giving a safe carry with a round in the chamber. Another aspect of the hammer is the fact when it’s at rest its high spur blocks the sights.

The 1873 loads easily and is smooth in operation and has that solid feel and pleasing classic looks. Major differences from guns like the Winchester 94AE and Marlin 1894 is the empty case ejects straight up and back, which precludes fitting an optic over the action; not that you’d want to! A low powered scope or red dot is very much in vogue on rifles of this type for modern competition, but all Uberti’s line of classic lever-actions sit in a very historical slot so you should know what you are getting before you buy.

Accuracy with iron sights is identical with the competition, though the action stroke is maybe a bit longer and slower. As I said this rifle is for more dedicated shooting like western or classic events and for the joy of a near perfect recreation of an original and iconic design gives.