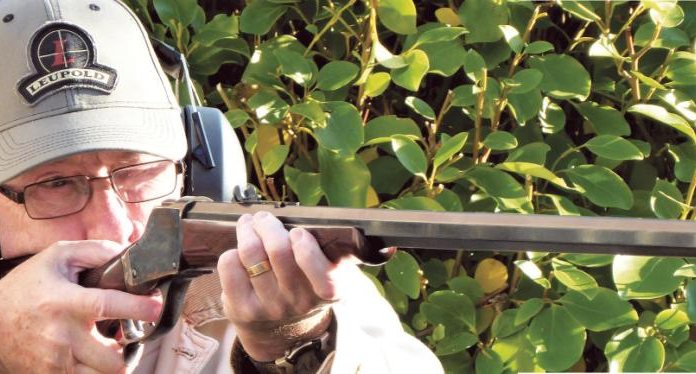 Big bore, single shot rifles were the favoured choice among professional hunters in the latter part of nineteenth century America. Companies like Sharps, with their superb Model 1874, and Remington with the rolling block action, happily supplied buffalo hunters and others with tools capable of doing the job.

Winchester, mindful that they were not competing in this market, decided that they should step up and join the game. With their reputation built on manufacturing lever action rifles, it was natural that they should continue the trend and the result was the introduction of the Centennial Rifle. The rifle was unveiled at the 1876 Philadelphia Exhibition to celebrate 100 years since the American War of Independence and was to become known as the Model 1876. Nothing more than an enlarged Model 1873, the rifle had its limitations but nevertheless stayed in production for some 21-years.

Long before the demise of the 1876, Winchester had found their own answer to their competitors’ single shot rifles with the help of a man who became one of the legends among firearms inventors. John Moses Browning and his brothers manufactured and sold firearms from a shop in Ogden, Utah, a business that had been started by their father. It seems that the first meeting between Winchester and Browning was to settle a claim that Browning was infringing a patent owned by Winchester. The matter was settled amicably and it was likely that this meeting brought to the attention of Winchester the single shot rifle that Browning was making under his own patent of 1879. It is uncertain how many of their single shot rifles the Browning brothers had produced to this time, but as they were using hand-powered machinery, it would appear that numbers were limited.

The result was that Winchester purchased the rights to this patent and in doing so began a successful collaboration between the two parties, which would last almost two decades. During this time, Winchester accepted every patent design that Browning turned out, the majority of which were never used, but it kept them out of the hands of competitors.

Back at the Winchester factory, some alterations were made to the Browning design before the rifle was introduced to the public as the Model 1885, the company’s first rifle to use a mechanism other than a lever action.

There are two basic variations, named the High Wall and the Low Wall and the difference between the two is obvious when viewing the profiles of both models. In the latter, a greater portion of the hammer and part of the breech block is visible, while the former allows only the hammer tip to be seen. This model had the largest variety of calibres ever offered on a Winchester rifle; the 1891 catalogue showing a choice of thirty, varying from .22 short rimfire up to .50-110 Express, with a few 20-gauge shotguns thrown into the mix. There was also a great diversity in weight and length of barrels, stocks, sights etc., making the 1885 a popular choice for modern day specialist collectors. Price of a standard rifle at this time was $15.00. Production was ended in 1920, when some 140,000 units had left the factory.

A glance at the Uberti catalogue will show that today’s shooters are well-served when it comes to choosing a replica of the Winchester 1885 model. Both the High and Low Wall versions are available in an impressive array of calibres, from .22LR to .45-120 centre fire. The smaller calibres are generally found in the Low Wall, although a couple, .44-40 and .45 Colt, are available in the High Wall version. Likewise, the heavy stuff is kept for the High Walls. There is a limited choice of barrel lengths with variations of stocks, sights etc. available.

The version we have here is a Special Sporting High Wall with a semi-pistol grip, non-standard trigger guard/operating lever and double set triggers. Let me get that trigger guard out of the way first. I encountered this design a couple of years ago on another version of this rifle and it is the most uncomfortable I have ever used. It is longer than normal to accommodate the two triggers and their adjusting screw, but I found the gap between the long rear spur and the stock is too narrow to get my fingers in and too wide to make for a decent grip. Elimination of that spur would have made the rifle just as easy to use and more comfortable to hold.

That is purely a personal view and your mileage may differ. The set riggers on the other hand are a joy to use. I’m not sure what the weight of the set trigger is but it was fine out of the box, so, I left it that way.

The woodwork, with its standard Uberti red/brown high gloss finish, is nicely chequered at the wrist and forearm and all wood to metal edges are a good fit. Should you desire a little bling and your wallet will stand the strain, the current catalogue offers the option of deluxe wood with an oiled finish as well as engraving, an ‘antique patina’ or charcoal blue for this model.

The 30-inch tapered octagonal barrel has nice edges and is a deep black, along with the buttplate, sights and small metal parts. The receiver, hammer and trigger guard/ loading lever have dark case colours. The buttplate has a sliding cover over a hollowed section of the butt containing a 5-piece brass cleaning rod, which, in the absence of any information in the catalogue to the contrary, I assume to be an optional extra.

The sights on this rifle are to be found on other offerings from Uberti and consist of a semi-buckhorn at the rear, which is adjustable for elevation and windage, and a blade front with windage adjustment only. The top tang is tapped for one of the many optional long-range setups which are available from Uberti and others.

The .38-55 cartridge was originally developed by Ballard as a target number and was introduced in 1884. A good deer cartridge, it was available in rifles from Marlin, Winchester, Colt, Stevens and Remington as well as Ballard. Winchester launched their popular .30-30 cartridge in 1894 based on this case. Production of commercial rifles ceased in 1940, when Winchester shelved this cartridge from their line-up, but more recently it has been re-introduced for the Model 94. Thankfully, the Italian reproduction firearms industry makes this old timer available again in some of their offerings. Brass is on offer from Starline and commercial lead bullets, while scarce, can be sourced. I chose to purchase a Lee bullet mould (#379-250- RF) and make my own. Those familiar with the Lee codes will know that this is a .379-inch round nose flat point bullet weighing a nominal 250-grains, and backed by a moderate load of 6.9-grains of Trail Boss powder, it proved satisfactory at one hundred yards.

As with many single shot rifles, the mechanism of the Model 1885 is relatively short but strong, as proved by its ability to handle those big game cartridges. Said by some to be stronger than the Sharps action, it shares a similar design feature in the twin locking lugs on its falling block. This twin lug arrangement was adapted to Winchester 1886 and 1892 lever action rifles. The comparatively moderate power of the .38-55 cartridge was never going to test the strength of the action and with the gun weighing in at a shade under 10-pounds, most of which is in the barrel, recoil was not going to be a problem either.

Although not necessary, I have gotten into the habit of putting the hammer on to half-cock before opening these single shot rifles. Whilst that long spur is a hindrance in shooting, it makes for an easy operation when lowering the lever, an action which exposes the breech and activates the cartridge extractor.

This is an extractor rather than an ejector and brings the empty case far enough out for you to remove it with your fingers. Pointing the barrel skywards will cause the case to fall out but this is a practice which more than likely will be frowned upon by Range Officers!

With all that weight up front, you are not going to be doing much off-hand shooting; so, a rest of some kind is most useful. The rifle was pleasant to shoot, and it does not take long to get into a rhythm with the operating procedure. On the day of the test, a stiff breeze across the range prevented any real accuracy tests, but the standard sights would definitely be improved by replacing them with a tang rear and uprated front, both of which are readily available and would take little fitting.

When the lever is lowered, the breech block and hammer drop far enough to allow you to push a cleaning rod down the barrel from the rear. There was a minimal amount of fouling in the breech area, which was easily removed with a brush and a little solvent.

The Uberti Model 1885 is a well-made piece of kit at a reasonable price in today’s market and should not be overlooked if you are searching for a single shot rifle. To my mind, it has much cleaner lines that the other guns in this sector and has a range of calibres to suit everyone. My choice would be to get one with the standard trigger guard. Now, where did I put that hacksaw?