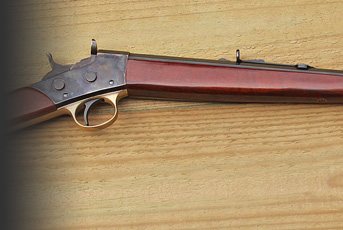 Remington can claim to be the oldest surviving American firearms manufacturer, having been in the business for almost two centuries. During this time they have turned out some memorable pistol and rifle designs that have stood the test of time and are still being made for today’s shooters and re-enactors. Sadly, Remington themselves no longer produce the “old stuff” but the Italian reproduction firearms industry will not let them die.

Among the classic long guns in their repertoire was the single shot Rolling Block model, several variations of which are produced in Italy today. While Pedersoli tend to concentrate their efforts on the large-framed centre fire calibres (they do offer a pistol calibre Carbine Baby, albeit still with the larger frame), Uberti have chosen to make a true “baby” version on a scaled-down frame.

The Remington rolling block action made its appearance around 1866 as a .50 rimfire calibre pistol for the U.S. Navy. A year later the calibre remained the same but was now a centre fire and the Army acquired them too. The same year the first of over one million military rifles and carbines, sold both domestically and abroad, left the plant and production continued on these until around 1888.

By 1868 it was being used to convert a number of Civil War percussion rifled muskets and a centre fire carbine, also manufactured for the Navy. These large military contracts ensured the success of the rifles and almost immediately the company turned its attention to the civilian market, adding a number of sporting rifles to the line. Customers were offered a choice of barrel length, stock styles, sights and calibres with plain or deluxe finishes. Calibres, both centre fire and rimfire, ranged from .22 up to .50-70 and 16 gauge shotguns were also available.

In 1897 Remington introduced a rolling block chambered for smokeless ammunition including .303 British, 7mm and .30-40 Krag among others. The French government purchased over 100,000 of this model. The Uberti model reviewed here can trace its parentage directly to the New Model Number 4 Rolling Block rifle introduced in 1890. Over 50,000 of this small frame rifle were manufactured in .22 and .32 rimfire and 25 Stevens, before production ceased in 1933, the end of the rolling block rifle story as far as Remington were concerned. While the rolling block probably did not, and likely does not today, attain the romance of the Sharps rifles, its simple but strong action provides the basis for a reliable and accurate weapon suited to hunters and target shooters alike. Thanks to today’s reproductions, modern shooters can enjoy the merits of this Remington classic.

For those who have handled the big bore Rolling Blocks it will become immediately obvious why this is called a “Baby” rifle. The circumference of stock measures a shade under 5½” at the wrist and it is a mere 3¾” deep at the butt. At the muzzle the twenty-six inch octagonal barrel is just over 17mm across the flats and the fore-end, just below the rear sight blade, is 29mm wide. Pull length is 13½”, the overall length is forty inches and the rifle tips the scales at 6lbs in this configuration.

The barrel, which has nice sharp edges, sights and trigger are finished in black with the frame, hammer and hammer block being case-hardened. The bottom tang/trigger guard and the shotgun-style butt plate are plain brass.

The walnut stock and fore-end are finished in Uberti’s standard gloss finish and the wood to metal fit is quite good. With only a couple of very slight exceptions metal to metal fit is first class. The front sight is a 10mm high blade (other heights are available and can be bought as an optional extra) on a base which is dovetailed into the barrel and is adjustable for windage. A small screw holds it in place. The rear sight is a semi-buckhorn arrangement with a sliding elevator and a square notch in the blade and the combination makes for a nice sight picture. The hammer and the block both have nice chequering for a positive feel.

The sight plane is about three inches above the comb of the stock and the rifle comes up to the eye easily. With the point of balance being under the rear sight blade this is a comfortable rifle to shoot, even from a standing position. I could not measure the weight of the trigger pull but is a little on the heavy side. Altogether the rifle looks and feels like a quality piece of kit and proved to be a decent performer too.

During the course of a morning the rifle was fed a variety of .22LR ammunition without the trace of a problem. Best 5-shot group that my old eyes and shaky hands could manage at 25 metres was a tad over 1½” and this was with budget-priced American Eagle high velocity with a 40-grain lead bullet. No doubt more competent shooters will better this with their own ammunition preferences and possibly a little work on that trigger.

Spent cases were extracted cleanly every time by the lip on the hammer block. The length and weight of the barrel means that felt recoil is almost non-existent. This is a rifle that I feel I could shoot all day without getting bored or tired, surely a good test of a gun’s true value for money. Uberti have done a good job of reproducing the Remington classic design and if you are looking for a solid, reliable plinker or something that you can hone to perform a little better, check this one out.