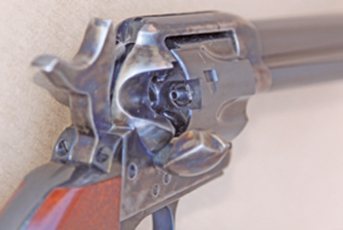 By far the most popular handgun among CAS shooters and re-enactors, collectors will pay large premiums for original first generation guns in good condition. The SAA had a virtual monopoly among Western shooters in the UK when the British Western Shooting Society was formed in 1994, but a mere three years later it all came to an end with the handgun ban.

The BWSS almost died as shooters were faced with the prospect of muzzle loaders, and the introduction of those abominable long-barrelled cartridge Peacemakers did nothing to help the situation. Even the pistol featured here, as near as you can get to the cartridge model in the UK, has not tempted the SAA lovers back to the fold of pistol shooting. If only those who have not tried BP shooting would give it a go, they would find it is not nearly as bad as they imagine or have been led to believe. Closed frame design – Remington, Rogers & Spencer and Starr among others – were manufacturing revolvers with top straps, Colt doggedly stuck to what was a winning formula for them. If we consider the belt and holster pistols alone (Dragoons, Army and Navy models), the Hartford factory turned out almost half a million examples of open top pistols between 1847 and 1873. Add to this another 400,000 small frame models and you see why they were in Roots, models between 1855 and 1870. These were small .28 and .31 calibre weapons and although they experimented with a larger calibre it never made the production line. Even when they entered Army trials for a new military cartridge revolver, their chosen candidate was an open top evolution of their 1860 Army percussion model. Only when the Army insisted on a closed frame revolver did they come up with the winning design, and that pistol is still being produced today by Colt and others, with only minor changes from the original pistols released in 187

Keeping It Simple – And Making It Better

The big plus for the military in the design of the SAA was its simplicity and that still holds true today. There is little to go wrong with the pistol and even if the mainspring breaks you can still get it to fire. Those parts that may be prone to breakage with heavy use, usually the various small springs, are readily available quite cheaply and can be easily fitted by the user. Judging by the number that I am asked to supply to users, the one spring which seems to break more than others in the Colt single action design is that which operates the hand or pawl that turns the cylinder. The fitting of a new hand spring arrangement in this pistol, although possibly upsetting some purists, all but eliminates the possibility of that part breaking and is a positive step in the operation of the pistol. Long available in the US as an aftermarket option, a coil spring fitted into the rear of the frame, and held in place by a small screw, replaces the thin spring normally attached to the hand.

From Cartridge to Percussion

Replacing the cartridge cylinder with a unit designed for percussion operation is the only major difference between this pistol and its centre fire counterpart. From the front each chamber is bored to a little under seventy per cent of the cylinder’s 1.6” length, and a quarter inch rebate is milled behind each one, slightly offset from centre, and into the remaining quarter inch of metal is screwed a percussion nipple. When viewed from the front the nipple is nearer the perimeter of the chamber than the centre. Quite why this offset arrangement has been employed I am not sure, as other percussion revolvers have their nipples in direct line with the centre axis of the chamber.

Harking back to the original Colt percussion revolvers, this pistol is equipped with a safety system which allows it to be carried with six loaded chambers. Because the cartridge firing pin would obviously not be suited to percussion caps this has been changed to one that has an oval head, and a corresponding oval slot is cut into the frame. On each shoulder between the nipples on the rear of the cylinder an oval recess which accepts the firing pin head when the hammer is down, forming quite a good safety.

Fans of the Colt SAA revolver will need no introduction to the operation of this pistol. Apart from those cut-outs around the percussion nipples there is nothing to visually distinguish it from its breech loading cousin. Looking at the rear of the cylinder it seems like it would be possible to leave a wall around the edge, with the nipple in a circular recess, improving the visual appeal of the pistol even more.

This 5½” barrelled model is beautifully balanced and is my favourite among the three barrel lengths offered (the others being 4¾” and 7½”). The barrel, cylinder and grip straps are black while the frame and hammer have a case hardened finish, a little dark for my tastes on this example but no two are the same, so I’m sure everyone could find one they like. The walnut grips have Uberti’s standard high gloss red/brown finish but the catalogue offers chequered wood, imitation ivory and pearl, chequered black polymer and even silver or brass Tiffany grips as optional extras. For those wishing to embellish their pistol even further, Uberti offer an engraving service but be prepared to wait for this.

Sights are basic being a flat sided blade at the front, around 9mm high, and a square notch cut into the top strap at the rear. The sight picture with this arrangement is surprisingly very good although there is obviously no adjustment. The hammer spur is knurled as is the tip of the cylinder pin, this latter a departure from the normal Colt style of a couple of rings. Exterior marking is kept to a minimum with very light proof marks on the cylinder but none visible on the frame or barrel. The frame has Colt’s second style of patent dates stamped on the left side and a serial number and proof date code just in front of the trigger guard. The last four digits of the serial number are also inside the loading gate. The bottom of the barrel has the obligatory stamping CAL.44 BLACK POWDER ONLY- A UBERTI ITALY

The fit and finish on this pistol is excellent with all edges being sharply defined and gaps being non-existent or absolutely miniscule. Cocking and trigger pull are super and lock up is almost 100%. Operation As this pistol is designed without an attached loading lever, the cylinder must be removed from the pistol for loading. The process involves the use of a small press, available as an optional extra, on to which the cylinder is mounted. The charging of the six chambers with powder, wad and ball is faster than using a normal percussion revolver, so that including the time taken to remove and replace the cylinder, there is very little difference in the overall loading time. If anything, this method is slightly faster. The cylinder can be capped while it is dismounted from the gun, but it is probably it is probably safer to do it after it has been put back into the frame. A dropped loaded cylinder might have serious consequences. Although the chambers in this cylinder are slightly shorter than other .44 calibre revolvers, I was still able to get twenty five grains of fine powder, along with a grease cookie, behind the .454” lead ball. Recoil with this combination is quite mild and the pistol printed three or four inches high and a couple to the left at twenty five metres. A big advantage of the closed frame over other Colt percussion revolvers is that there is no danger of spent caps falling into the hammer channel. After twenty four shots there was evidence of black powder fouling as the cylinder began to bind a little, but as you have to remove the cylinder for reloading it is good practice to give the arbour and the centre of the cylinder a quick wipe before re-assembling.

Regular readers will know that I like my reproductions to be as authentically accurate as possible and this one does not quite tick all of the boxes. However, I enjoyed shooting this revolver so much that, as I may be in the market for a .44 pistol shortly, I will definitely give it some consideration.
While I believe this model was primarily introduced to satisfy the needs of the SAA lovers in the UK, it has surprisingly proved to be popular in the United States, where percussion revolvers can be purchased - in most states – without any restrictions. Once bought, the owner can buy through the post a conversion cylinder which changes the pistol to a cartridge model, thus giving the shooter a choice of breech loader or percussion. Before anyone writes to ask for details, these conversion cylinders are not available in the UK!

This revolver has also proved to be a hit with the Western shooters here in the UK where replacement cylinders can be bought which use smokeless powder, albeit still a muzzle loader requiring the removal of the cylinder for loading. The advantage is in the cleaner burning powder requiring little or no cleaning over a day’s shooting and less likelihood of problems during a competition. Should you wish to buy one of these cylinders in addition to the one supplied with the pistol you will need a “space” for it on your FAC.
If you are a shooter who misses the feel of your favourite revolver, or someone new to the game who never experienced the cartridge models, but still hankers after a Peacemaker clone, this is as close as you are going to get under the UK’s draconian firearms laws.