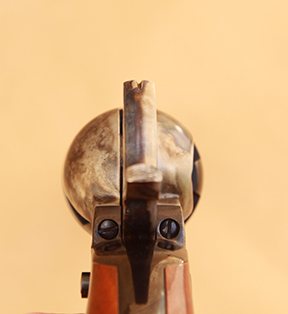 Sam Colt was justifiably proud of his range of percussion revolvers. By the time of his death, in 1862, his factory in Hartford had produced around four hundred and fifty thousand pistols ranging from the diminutive .31 calibre 1849 Pocket model to the huge .44 Walker, which held the accolade as the most powerful handgun up until the advent of the .357 magnum in 1935. Another 53,000 revolvers were produced at the London factory.

Twelve months before Sam’s demise the North American continent was thrown into turmoil with the outbreak of the War between the States. Ever mindful that the success of his company depended on military orders, and that the Union Army would require large numbers of weapons, he had been quick to offer his New Model Holster pistol for the approval of the Ordnance Department. The revolver was trialled successfully and for the first three years of the conflict became the adopted sidearm for the Union Cavalry. By the time production ceased, in 1873, over two hundred thousand examples of the 1860 had left the Connecticut armoury, over sixty percent of which were procured by the Union Ordnance Department. Interestingly, in the five months prior to the outbreak of hostilities, over two thousand of the new revolvers were shipped to dealers in the Southern states and would have been available to the Confederate forces from the start of the War.

Based on, and using the frame from, the 1851 Navy revolver, the standard 1860 Army was a six-shot, .44 calibre pistol with an eight inch barrel. The top of the frame is rebated at its front end to accommodate the larger cylinder. The grips were one quarter of an inch longer than the Navy and the round barrel had a new “creeping” loading lever instead of the earlier model’s hinged arrangement. Standard finish was a blue barrel, cylinder and back strap with a case-hardened frame, loading lever and hammer. The trigger guard was brass and the grips walnut, oiled on the military pistols and varnished for civilian versions. Some early pistols had shorter barrels and fluted cylinders and many of the military guns were equipped to accept a detachable shoulder stock.

The pistol reviewed here is a Uberti reproduction of a military ‘4-screw’ revolver designed to take the auxiliary stock, turning the pistol into a carbine. The fourth screws, the rearmost ones in the line of three, along with the cut-out in the recoil shield, are used to attach the stock. In the nineteenth century these screws were later omitted as they were found to be superfluous. There is also a small groove in the base of the back strap to take the hook from the stock mechanism. The Uberti’s only variance from an original military revolver is the high gloss varnish applied to the woodwork.

The case colours on the frame are mainly pale greys and blues with the hammer and loading lever showing some dark tans. The blue – or black – surfaces are of a decent quality with the metal edges being nice and sharp and the metal-to-metal fit is first class. The grips on this example were a tad oversized at both the front and back edges. Fore and aft cylinder lockup was as tight as possible and the barrel to cylinder gap was almost zero. There was a small amount of side to side movement on the cylinder due to either the locking notches being a little too wide or the locking bolt too narrow.

The loading lever catch on this example was slightly loose and could be moved side to side although it would not come out of its dovetail. All in all this is a nicely made pistol and it is easy to see why the design was popular in its heyday - and also with today’s shooters.

Not wanting to use a shoulder stock, the first thing I would do if I were to buy one of these guns is to have the two extra shoulder stock screws taken down so they are flush with the frame. The one on the right rubbed my trigger finger and the left one is right where I want to put my thumb on the left of the frame. I can imagine they would be a little uncomfortable during an extended shooting session.

The rear sight is the customary Colt percussion unit, being a v-notch cut into the top of the hammer, which comes into use when the hammer is at full cock. The front sight is a short, angled steel blade set into the barrel. The set-up is more than adequate for this type of pistol but some users may wish to deepen the v-notch a little. The knurling on the hammer spur is crisp without being too sharp and combined with a nicely weighted mainspring makes single-handed cocking very easy.

Using around twenty eight grains of Henry Krank’s fine black powder and a .454” lead ball, the recoil was easily manageable. With the sight picture that I prefer with this type of pistol – the tip of the front blade just above the top of the v-notch – point of impact was around three inches above point of aim and very slightly to the left at twenty five metres.

With a load of twenty grains of Hodgdon 777 powder the POI came down slightly but there was a much higher incidence (5 to 1) of spent percussion caps being blown back into the hammer recess, causing a number of misfires. While the pistol will run for longer with 777 powder before fouling becomes an issue, I do not find that cleaning up afterwards is that much quicker or easier so, unless you have to use the BP substitute (some indoor ranges do not allow BP) then for me the extra expense is not justified.

Being able to take the barrel off the frame for cleaning makes the process a little simpler by giving better access to some of the nooks and crannies with an old toothbrush and cotton buds. The action of this revolver, as with the majority of Colt percussion pieces, means that even when the innards have to be removed for cleaning or repair, it is still a relatively straightforward operation. If the mechanism is cleaned regularly then breakages can be kept to a minimum (I cannot remember the last time I replaced a part) but it is always wise to carry a spare trigger, locking bolt, trigger & bolt spring and a hand and spring in your tool box. If something does break you can bet your bottom dollar it will be just as you are halfway through that last string that will win you the competition!

The Uberti Colt model 1860 revolver is a well made and seemingly reliable piece of kit and will probably be one of the first you look at if you are contemplating the purchase of a .44 calibre percussion revolver. Some will tell you that the Remington NMA is a stronger pistol, and that may be so, but it is unlikely that you will use your chosen weapon day in and day out as they did in the 1860’s, and your life will almost certainly never depend on it. Colt revolvers served the Union army well and the Uberti will give you equally sterling service. Besides which, it’s a better looking pistol!