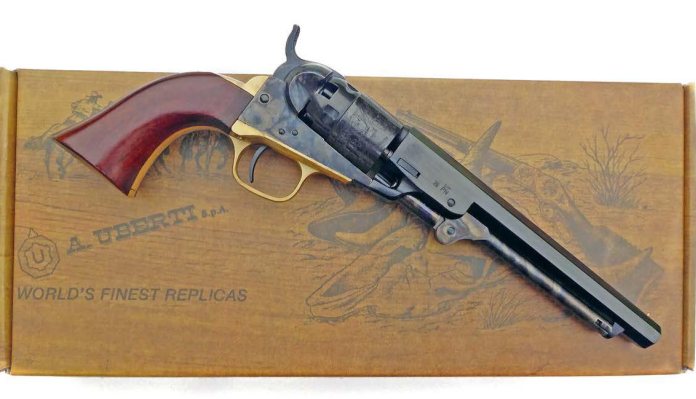 When Sam Colt got his second chance at realising his dream of being a big player in the firearms manufacturing sector, he grasped it with both hands. His order from the US government, in 1847, for 1000 Walker revolvers gave him the foundation on which he could build his empire. Such was the success of the Walker and its replacements, that Colt was the major supplier of revolvers to the US mounted troops for the next 45 years.

Soon after commencing production of the Walker, he began to turn his attention to the civilian market in the shape of the Baby Dragoon, a fiveshot, .31” calibre pistol offered with barrel lengths from 3 to 6”. Introduced in 1848, initially without a loading lever, the following year it morphed into the 1849 Pocket Model (first issued in 1850), the most prolific of the percussion revolvers that Colt produced, with some 340,000 pieces leaving the Hartford factory before production ended in 1873. Still in .31” calibre, barrels were again from 3 to 6”, but the vast majority of this model was equipped with a loading lever. Customers were also offered the choice between 5 or 6-shot cylinders. Aside from those produced in Hartford, around 11,000 Pocket models were produced at Colt’s rather short-lived London factory.

Around the same time that the 1849 Model was introduced, the public was offered a revolver that slotted in between the Dragoon and the Pocket. It came in the form of the .36” calibre Navy revolver, since named as the 1851 Navy. It was a 6-shot pistol with a 7½” barrel and attached loading lever. Both of these revolvers came at a very opportune time for Colt as gold had been discovered in California in 1849, and thousands were rushing West to the gold fields. Personal protection was high on the agenda and initially demand for Colt’s revolvers far outstripped supply, and the guns were changing hands in California for four or five times the price in the East.

In 1860, Colt introduced their new holster pistol to replace the ageing Dragoons, and this utilised a .44” calibre stepped cylinder and barrel mated to a slightly modified 1851 Navy frame. A short time later they did the same by adding a .36” cylinder and barrel to an 1849 Pocket frame, resulting in the model we have here, officially named the Colt Pocket Model of Navy Calibre Revolver. A bit of a mouthful that, so it’s usually called the Pocket Navy. Octagonal barrels were furnished in 4½”, 5½” and 6½ lengths with attached loading levers and the cylinders were all 5-shot. Only around 22,000 of this model were originally produced and it was not particularly successful, with a large number later being converted to breechloading cartridge revolvers.

By this time the Colt factory had all of the bases covered for both the civilian market and the military requirements, a situation that remained the status quo for many years. Sadly, Sam himself would not see the introduction of this revolver as he died in 1862.

As near as it gets

Fans of Colt products, and I count myself among them, will be gratified that Uberti covers almost all of the Colt percussion range of pistols in their inventory. Missing are the 1855 Roots or Side hammer, which has never been in their catalogue, and the Paterson model. The latter has seemingly been dropped recently and is now only available from Pietta, while the Roots is not currently produced by anyone.

From the very beginning, Uberti has striven to make their reproductions as accurate as possible in the rendition of the originals, and this model is no different. The only departure is the polished brass trigger guard and back strap. On original Colts, these parts would have been silver plated but obviously omitted here as a cost-saving exercise.

The 6½” barrel (5½” also available) and cylinder are black with a decent gloss. The edges are generally good, but I feel that those on the barrel flats could have been a bit sharper. This is down to the individual polisher in the factory. The frame, loading lever and the hammer are case coloured, with the lever being slightly better than the rest. The cylinder is rolled with a stagecoach holdup scene, which is the same as that on the 1849 Pocket. The rear of the cylinder has five safety pins, which locate into a slot in the hammer face. These serve to lock the hammer between two nipples when at rest, ostensibly to prevent a discharge should a loaded pistol be dropped. The one-piece walnut grip has the usual Uberti gloss finish and fits the straps very well, with only the smallest of overlaps. Metal to metal fit on the gun is excellent.

The top right face of the recoil shield has a groove to allow spent caps or fragments to fall away when the pistol is cocked, an action which is helped if you tilt the gun slightly to the right as you cock it. The annoying ‘cap in the hammer slot’, where a spent cap or fragment falls between the hammer and the frame, did not manifest itself during testing. The capping cut-out on the recoil shield does not have a groove as on the larger models.

Sights are as usual with Colt ‘open top’ percussion revolvers, with the rear being a cut-out in the hammer and, in this instance, a conical brass post screwed into the top barrel flat. The setup is adequate, but I often feel that I’d like to cut that rear notch a shade deeper. The loading lever has a very precisely cut, catch and latch arrangement, which locked it in place very securely.

The pistol shows the standard markings found on these Italian reproductions, with the major wording under the loading lever and proof marks on the right barrel lug and the bottom of the frame, in front of the trigger guard, where the serial number is also located.

As this is designated as a ‘pocket’ pistol, with the original idea being to provide a quick response to a physical threat, the grips are a fair bit smaller than its bigger brothers, the Navy and Army models. As a result, many may find them too small for a comfortable hold. There is a hint of roughness when cocking, so a little judicious polishing would be a good idea on this example. I also found that if I tried to cock it too fast, it would occasionally over-rotate the cylinder very slightly, but a slower, deliberate action eliminated this. The cylinder was solid as a rock with the hammer at full cock and at rest.

The photographs show the difference in size between the cylinder on this pistol and a similar calibre 1851 Navy revolver, meaning an obvious reduction in the powder charge, while the projectile remains the same size. I managed to squeeze in around 18-grains of Henry Krank fine black powder behind the .375” round lead ball. Given that this pistol is around 3/4 of a pound lighter than its big brother, felt recoil with this load was only slightly less than the Navy, but muzzle lift was more easily controlled.

It didn’t take too long, around 30 shots or so, before fouling began to slow things down a little. To get things up and running again, it was merely a case of popping the wedge, pulling off the barrel and cylinder, then cleaning the cylinder arbour and its channel in the cylinder, before smearing a little grease on the arbour and reassembling the pistol.

Shooting offhand at 25 yards, the best I could manage was around 5” for five shots, with most groups being 6” or more. Using a rest closed things up a little but I was still around the 4” mark. It’s certain that this pistol would not, in my hands anyway, win any competitions, but I think prospective purchasers will be buying one of these for a bit of fun with something slightly different to the norm. It’s an enjoyable little pistol and did not give any trouble at all for close to 100 shots.

If a small, .36” calibre revolver suits your needs, you might also want to check out the Pocket Navy’s sister in the form of the 1862 Police model. The two guns share the same frame and lock-work, but the latter has a round barrel with a different style loading lever and a half-fluted cylinder and comes in at the same price. The Police revolver for me is the most attractive of all the Colt percussion models.