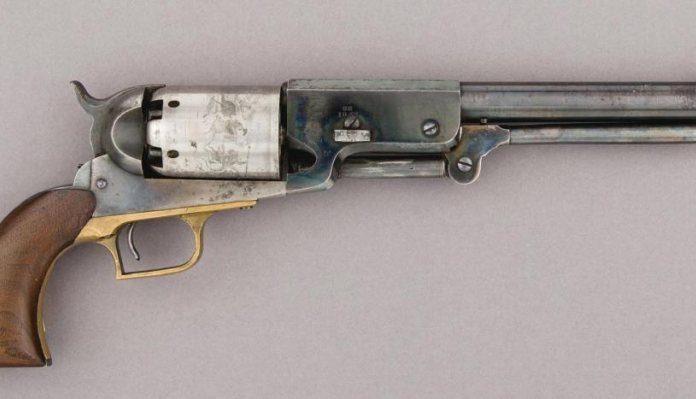 Sam Colt’s boyhood dreams of becoming a magnate in the firearms manufacturing business came to fruition in 1836 when the Patent Firearms Manufacturing Company was established in Paterson, New Jersey. His repeating rifles and pistols were state of the art for the period, although expensive and not without their problems. Large military contracts were the lifeblood of any aspiring firearms company and unfortunately for Colt, these were not forthcoming. This, along with reliability and other setbacks, some of which were of Sam’s own making, led to the venture being wound up by 1842, leaving his dreams in ashes.

A few short years later his fortunes were about to change. The winds of war were blowing over the North American continent and in 1846 the United States entered into a conflict with neighbouring Mexico. As a result, the military had an increased need for weapons, and Colt was on hand to take advantage of the situation.

Samuel Hamilton Walker, a captain in the United States Mounted rifles, was visiting Washington, D.C. on a recruitment drive and made a detour to visit Colt. Between them, the two men redesigned Sam’s Paterson revolver, turning it from a 5-shot, .36 calibre model into a 6-shot, .44 calibre weapon. Gone was the folding trigger of the original, replaced by a stationary trigger and guard, plus all were fitted with a folding loading lever. With the final design weighing in at around 4.5lbs, it was intended to be carried in pommel holsters, rather than on the person. Acknowledging the support that the young officer had given, Colt named the new revolver in his honour.

Sam accepted an order from the Army for 1000 pistols, even though he had no facility to manufacture them. He quickly arranged for the guns to be made at the armoury of Eli Whitney Jr., whose father had invented the cotton gin, with the proviso that at the completion of the contract, Colt would retain ownership of the machinery used to make the guns, thus giving him a strong foothold to grow his business.

Whitney was contracted to make 1,100 revolvers, with the extra 100 above the Army order to be used for private sale and as promotional gifts. Sam was not averse to giving away guns to those who he thought may be able to help him in his business, and his copious generosity had been one of the problems in the Paterson days.

Each chamber of the Walker’s massive cylinder was said to take up to 60-grains of powder, similar to a musket load of the day, although Sam Colt apparently advised using no more than 50-grains. Whatever the troops were using, burst cylinders began to be a problem and some 300 of the original 1000 guns were returned for repair or replacement parts. With the speed at which the guns were designed and produced, the finger of suspicion pointed at less than perfect quality of components.

Captain Walker was presented with a pair of the new pistols and carried them into battle at the head of the First Pennsylvania Volunteers on October 9th, 1847 as his troops attacked an enemy force at Huamantla in Mexico. He was unfortunately killed in the engagement, with some sources saying the fatal wound came from a Mexican lance, while others say it came from a shotgun. He is buried in the Old Fellows’ Cemetery in San Antonio, Texas.

It’s estimated that the survival rate of original Walker revolvers is around 10%, or a little over 100 specimens, making them rather elusive and very expensive. I had the pleasure of handling one 20 years ago in the States and in 2018, the only known cased example sold for $1.6M plus tax! Thankfully, you can buy a super reproduction from Uberti for considerably less than that, and you need not be afraid to devalue it by shooting it.

It’s a big pistol. The overall length is a little short of 16”, with the barrel being 9” and that 4.5lbs is nearly all ahead of your hand, making it a little front heavy. The one-piece walnut grip, with Uberti’s usual varnish, is slightly longer than other models, with a pronounced flare at the base, and provides a reasonably comfortable hold, with only very minor overlaps where it meets the straps. Note the curve on the top of the grip where it meets the frame; on subsequent models, this was changed to a square junction to save time and expense. The frame (including the cylinder arbour), loading lever and hammer are a nice mixture of case coloured blues, greys and tans, with the barrel, cylinder and back strap having a deep black gloss. It is here that we see the major difference between these modern reproductions and original Colts - the 19th-century guns had their cylinders left ‘in the white’.

As with all of Sam Colt’s percussion revolvers, the cylinder is rolled with a scene, in this case, a representation of a fight between mounted dragoons and Indians. The original plates were done by a New York banknote engraver called W.L. Ormsby, and his name is located under one of the horse’s hooves. The rear of the cylinder has a single safety pin fitted between two chambers, which locates into a slot in the hammer face, in theory allowing the pistol to be carried fully loaded. The square back trigger guard is polished brass and all the parts fit together nicely with good edges. It was nice to find a wedge that tapped out without the use of a brick hammer, while still locking the pistol up good and tight.

Sights are as usual on these Colt open frame designs, with the rear being a v-notch cut into the hammer and the front a white metal blade soldered into a slot in the barrel. The loading lever is held in place by a sprung projection fitted into the bottom of the barrel, which locates into a slot in the lever. On my first outing with one of these pistols some 10 years ago, it suffered the same problem as the originals, in that each time the pistol was fired the lever would drop, preventing the revolver from being cocked until it was returned to battery. This has improved over the years and this one is by far the best one to date. The lever is held as securely as it is on the later guns, with a catch and latch arrangement at the muzzle.

Visible markings are kept to a minimum, with the proof marks on the front of the frame and the ‘US 1847’ stamped on the barrel lug. The obligatory ‘Black Powder Only’ etc. are on the barrel, under the loading lever.

The mainspring is a v-type, reminiscent of those found on muzzleloading rifles, and is fitted to the trigger guard by means of a blade in the guard, which goes into a slot in the spring. This provides a stronger resistance when cocking and a heavier than necessary trigger pull, although it broke cleanly without any creep. Later models had a flat spring screwed into the trigger guard.

The hammer has clear but not too sharp knurling giving a good purchase and the lockup is very tight, occurring exactly as the hammer reaches its rearmost travel. Bolt locking notches on the cylinder are oval, a feature carried over from the first model Dragoon pistols but subsequently changed to square.

Looking back over my notes, I saw that on my first outing with a Walker, I did try to get the maximum amount of powder possible into a chamber and, using Henry Krank fine powder, that amounted to a shade over 55-grains. That was gradually lowered until I found a good balance between power and accuracy and settled at 42-grains, so that is where I started this time, behind a .454” lead ball. Even with that maximum load, recoil is not a big problem due to the weight of this pistol, but accuracy suffers a little. The 42-grain load gave a liberal cloud of white smoke and lifted the muzzle 8-9” inches under recoil, which would earn you some style points at a Cowboy Action Shooting (CAS) competition! Shooting offhand, it was easy to keep the shots on an A4 piece of paper, more than good enough for CAS.

There were no instances of the ‘cap in the hammer channel’ syndrome that sometimes hinders these percussion Colts, and I could easily get 30 shots off before I felt the need to clear the fouling, which began to slow cylinder rotation. While not being a tack driver, and as a competition shooter would unlikely be the main pistol in your bag, this is a fun pistol to shoot and brings a smile to the face with each shot. There is also likely to be a queue of shooters waiting to have a go!

The Uberti website lists these guns as being available in this standard finish as well as a number of others, including charcoal blue and ‘Old West Antique Patina’ and engraved versions, but if these are available there will be an extra cost and possibly a long wait.