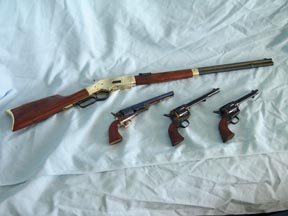 Well I thought it would be a long time before I ever got my hands on a single action Colt Peacemaker again! But on my desk are two examples, along with a Colt .36 Navy cap & ball revolver and a Winchester 1866 sporting rifle. So Mr Northmore has a Section 5 licence? No, but what he does have are some of Uberti’s miniature firearms. I had briefly seen these tiny little guns many years ago, but never had the chance to play with them, but now I have…

There’s nothing new about models of guns and throughout history people have been making smaller versions of the real thing from cannons to firearms. But what we have here are real, though inert/non-shootable, miniature examples of some of Uberti’s most famous reproductions, which are exact in every detail but one!

Why you would want such a thing is debatable as they have no function outside of being collectable, visually pleasing and unusual. Plus they are expensive, as you might imagine; making something this small that functions like the real thing is not easy. Having been an owner of the Uberti Cattleman, which is their name for the Colt 1873 Model P as they called it - let’s start with the cartridge revolvers.

I have two here; the 7 ½” Cavalry and the shorter 5 ½” version, sometimes called the Artillery model. I owned two of the former in 44-40 WCF when I was a western shooter and have to say they are exact. Barrel, cylinder, trigger guard and grip frame are blued with the frame being colour case hardened, as is the hammer. The grip is walnut and shows a good figure for such a small piece of wood.

Everything works too, the hammer offers half and full cock positions, so you can freewheel the cylinder. The loading gate swings out and the ejector rod pushes through and springs back into position. Best of all the cylinder can be removed as there’s the forward cross bolt at the front of the frame and once that’s pressed the axis pin can be pulled forward. Amazing! Equally odd are the micro screws that hold the gun together, fully functional you would need some very small screwdrivers to remove them…

The only real difference apart from the size is the fact the bore is not rifled, there’s an integral plug at the forcing cone and no calibre exists that will fit this tiny wheelgun. The guns even have numbers and all the markings that the full sized firearms do.

The Colt .36 Navy is more elegant, with a charcoal blued cylinder and octagonal barrel, the former showing the roll-engraving of the familiar naval battle scene upon it. Frame and ram rod are colour case-hardened with a brass trigger guard and back strap. There are even tiny little nipples for each chamber and the wood if anything is better on this model.

Again fully strippable the cross wedge can be pushed out to allow the barrel/rammer assembly to be removed from the arbour in the standing breech. The Navy Colt is identical in barrel and overall size to the Cavalry revolver, though being of finer line, is slimmer.

Larger by the fact of the model it represents is the Winchester 1866 (Yellow Boy) sporting rifle. This is a true work of art as the quality of materials and finish is very good. The walnut forend and straight hand butt are superb bits of timber, the brass action, end cap and crescent-type butt plate are finished to a mirror shine. The barrel, magazine tube and lever are well blued. Sights consist of a flip-up ladder with actual sliding range bar at the rear, which is even marked as to distance. Up front is a blade set in a transverse dovetail. Obviously zeroing is not feasible but it’s all there and it works.

The action is identical with the classic vertical sliding feed block and long bolt with hammer cocking extension at the rear. The only thing missing is a functioning extractor claw, which did surprise me a little, given the effort to be true to the real thing they have put in. The operating lever lock is featured and it actually works too. But then again as a qualified anorak I notice these things, sad that I am! The loading port works, as does the hammer, which shows both half and full cock positions. Measuring 21 ¾” from muzzle to butt the 1866 shows an 11 ½” barrel, the real thing had a 24” tube.

There’s little doubt that these Uberti miniatures are beautiful, collectable and near unique items. They also command very high prices, which is understandable, as I would assume that they must at least be hand assembled and finished. Prices are £410 for any of the revolvers and £1365 for the lever-action.

Speaking to Ken Grey of Henry Krank indicates that these tiny guns do sell, despite what many might perceive as a price point out of all proportion to what they have to offer. After all what can you do with them apart from look and touch? Though I would sooner spend my money on real guns that I can use, I can also see the attraction too, so I guess it’s a case of beauty is in the eye of the beholder.

My thanks to Ken Grey and Henry Krank & Co Ltd for the chance to look at some very unique pieces indeed.