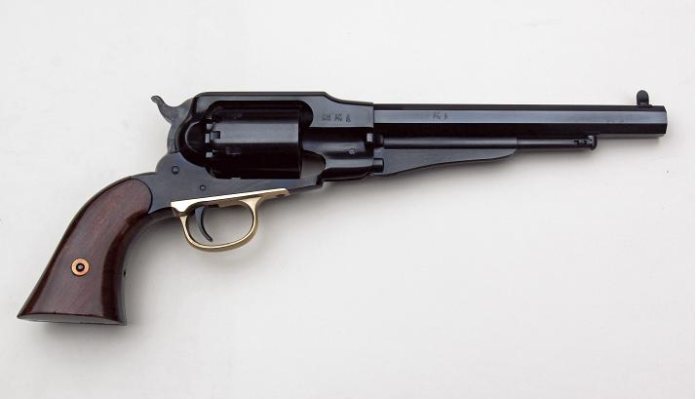 The second most popular revolver used during the American Civil War, surpassed only by the Colt Model 1860 Army, Remington’s revolver proved to be reliable and strong, counting among its admirers Buffalo Bill Cody.

Carrying a New Model Army revolver for several years he wrote to Remington claiming “It never failed me”.

Exactly two centuries ago, the name of Remington was introduced to the annals of gun making and such was the impact and success of their initial products that the company has been producing firearms continuously ever since. Their reputation was built on the manufacture of high-quality rifle barrels, which then morphed into the production of complete guns, initially rifles but they soon joined the ranks of successful handgun manufacturers, not least with a varied line of cartridge derringers.

Today, the name Remington is to be found, in the main, on quality rifles and shotguns but they have recently returned to the manufacture of handguns after a gap of 85 years. Their rolling block rifles gained fame and acceptance all over the world during the 19th century and the various Remington cartridge derringers are still popular among today’s collectors. Among the company’s percussion and cartridge revolvers the model which will be most instantly recognisable to modern shooters and collectors is the New Model army revolver, erroneously named 1858 Model. This was the last of the Remington percussion revolvers and although the final design was not patented until March, 1863, the top flat of the barrel still bore the September, 1858 date of the original Beals patent, hence the misnomer.

Cheaper Than A Colt

As the American Civil War entered its third year, resources on both sides were becoming stretched, so when Remington proposed to supply the Union forces with their New Model army revolver at a price of 10 dollars lower than was being paid for Colt revolvers, the powers that be took advantage of the offer. Colt was forced to drop their prices dramatically but Remington came down even further and with well over one hundred thousand of these pistols being purchased by the end of hostilities, the price of two dollars per unit less than the Colt 1860 model proved a great saving. Added to this was the fact that the Remington’s solid frame with a top strap, which is machined as one piece with the grip strap, was often seen as a stronger revolver than the Colt. This design makes use of only one screw in the grip area of the pistol (excluding that in the wood grip panels), as against six on the Colt percussion revolvers.

The New Model was produced from 1863 until 1875 with the vast majority turned out during the War years. It proved to be Remington’s last major handgun contribution to the US Army as from 1873 Colt all but monopolised this sector for several decades.

Like many handgun shooters, my first revolver was a Smith & Wesson double action, in my case a stainless model 686. My interest in the Old West drew me to exploring other avenues and when it came to my first percussion revolver I was drawn to the Remington 1858 and purchased a Uberti rendering. I seem to recall it was around £30 more expensive than the Pietta version but there was no contest when it came to operation, the Uberti was much smoother. Nowadays there is little, if any, mechanical difference between the two makes, it is purely down to cosmetics. I well remember taking that pistol to the Catterick ranges and shooting close to one hundred rounds on its first outing. It was a cracking revolver.

For well over five decades Uberti have been producing very accurate reproductions of revolvers and rifles from the major American manufacturers of the mid to late 19th century. Their copies of Colt, Winchester and Remington products have been used by shooters, re-enactors and movie stars, all seeking authenticity in their portrayals of the Old West.

With its black finish to the frame, cylinder and barrel, this Remington leans more to function than form. Averting a full-black appearance are the small brass trigger guard and case hardened hammer. It is a no-frills pistol built to do a job without the attractive appearance of the case hardened frame as used on the Colt. The wood has the same red/brown colour as usual on the Uberti products, although this one seem to have slightly less of a gloss than I remember, but the varnish is still being applied after the brass grip escutcheons are fitted. At rest, the tip of the hammer sits lower than a Colt, making it a bit easier to cock for those with smaller hands and the smooth wide trigger is very comfortable to use.

The rear sight is also an improvement over the Colt’s hammer notch, being a groove running along the top strap of the frame, culminating in a very sharp ‘v’ at the rear, while the front is a round topped post, dovetailed into the top flat of the barrel. The resulting sight picture is surprisingly good and with a six o’clock hold the pistol shot a couple of inches high for me.

With its web design, the rammer is stronger than those on percussion revolvers from other manufacturers and it would be seemingly impossible to bend this one, regardless of how oversized the ball is.

Perhaps the greatest advantage over the open frame layout is the fact that spent caps or fragments cannot find their way into the hammer channel and thus cause a misfire. With all of these plus factors I wonder now why I have been a fan of Colt percussion revolvers all these years! I guess the Sam Colt story just has a bit more romance.

All edges are reasonably sharp and the fit of the various parts is very good. Cylinder lock up is extremely tight, both at full cock and rest, and the trigger breaks cleanly at a shade over five pounds on my gauge.

A quick check on the hand shows that it does not stick out from the recoil shield as far as previous versions and that both front edges of the hand have been rounded slightly, after it was blued and before it was fitted. I’m not sure whether or not this is a new tweak on this model or a one-off on this pistol. The rear face of the barrel is also white, so maybe there is some degree of ‘hand fitting’ at Uberti? Whatever the reason for the work I feel that it is a slight improvement.

Even back in the days when these revolvers were introduced there was some thought given to safety. In the event of an altercation, it would obviously be preferable for a military sidearm to be loaded to capacity, a possible cause for concern in the case of a percussion revolver. Colt used pins on the rear of the cylinder, which fitted into a slot in the face of the hammer. Remington chose to cut slots between each chamber on the periphery of the cylinder into which the face of the hammer could sit to hold it in place. Both systems work reasonably well but in today’s safety conscious world it is more usual to carry a loaded pistol with only five charges, with the hammer down on an empty chamber.

The pistol has the obligatory Italian markings, along with a new one that I have not seen before – the date of manufacture is stamped into the base of the grip strap.
When I first started using percussion revolvers I was advised to ‘cap off’ before each session to make sure the nipples were clear and this is good advice with these Uberti products to ensure that the last of that factory oil is removed from the nipples. The nipples on this model are angled slightly away from the central axis, making capping that little bit easier.

My standard load for these .44 calibre ‘Army’ revolvers is 25 grains of Henry Krank fine black powder behind a .454 inch round lead ball and either a lubricated wad or a homemade grease cookie, with a Remington percussion cap. Recoil is very modest and although this is not an out-and-out target revolver, I was happy to be able to keep the shots on a seven inch paper plate at 25 yards shooting single handed. With a barrel to cylinder gap which is all but non-existent, the fouling around the cylinder arbour was minimal and did not begin to manifest itself until part way through the eighth cylinder full, and even then I could have managed another dozen or so shots before cleaning became necessary. I got through almost a full box of ball during the morning and, just as with Buffalo Bill, it never failed me either.
This blued version is also available with a 5½ inch barrel and both barrel lengths can be had in stainless steel, the longer length having the option of target sights. For those who prefer the ‘Navy’ model, a 7½ inch version is offered in .36 calibre. For a strong, reliable muzzle-loading revolver, the ‘58 Remmy’ is hard to beat.