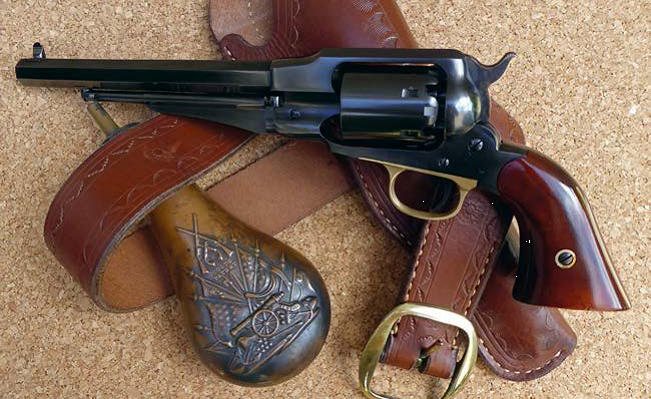 It was not until 1873, when the army was looking for a new revolver and specified that it must be a solid frame design, that Colt departed from the open-top design that had served them well for more than a quarter of a century. Their biggest rivals in the handgun market, Remington, had been producing closed frame percussion revolvers since the late 1850s but at the outbreak of the American Civil War, it was Colt, with their New Model Holster Pistol (1860 Army revolver) that the Army chose to supply its troops with pistols.

For the first two years of the war, Colt had a virtual monopoly on .44 calibre handguns, but when Remington introduced their New Model Army in 1863, the tide began to turn. The disastrous Colt factory fire in 1864 meant that they could not supply the Ordnance Department with revolvers, and Remington was ready to step into the breech.

Having delivered in excess of 125,000 units to the northern armies, Colt found themselves in a helpless position, and for the remainder of the conflict, the Army’s .44 calibre handgun of choice was the Remington New Model Army, with the government purchasing an estimated 115,000 examples by war’s end.

Remington’s first attempt at a .44 calibre percussion pistol was a prototype 6-shot model based on a patent obtained by Fordyce Beals in June 1856. With an 8” barrel and no provision for a loading lever, it was never put into production, and it is estimated that less than 10 were produced. The Army’s first purchase of a Remington percussion revolver came with the Remington-Beals Army Model in 1861, closely followed by the 1861 Army revolver (a.k.a. Old Model Army). This latter model had a channel cut along the top of the loading lever which allowed the cylinder arbour to be withdrawn without dropping the lever, a system that was found to be unsatisfactory for military use, and many guns were returned to the factory for modification. Almost all of the production of this model, some 6.000 units, went to the Army.

The final variant was the New Model Army, built around the earlier Remington-Beals Army patent. The top of the barrel was marked PATENTED SEPT. 14, 1858 and it is this marking that has caused the pistol to be incorrectly called the ‘1858 Remington’, a name which has stuck over the years. Undoubtedly stronger than the Colt 1860, the onepiece frame and grip strap design has its 8” barrel screwed into the frame. The brass trigger guard is held on by a single screw as are the two wood grip panels, meaning the area of the gun has four screws less than the corresponding part of a Colt. The wood panels are obviously cheaper to make than the Colt’s one-piece stock and the Remington’s action is a twoscrew design, using one screw for both trigger and locking bolt, whereas the Colt uses separate screws for each of these parts. All of these features meant that, even when the Colt factory was up and running after the fire, Remington could undercut their prices and hang on to the Army’s business for the rest of the war.

It’s in the detail

Uberti has created a very faithful rendition of the Remington NMA revolver. The black on the barrel, frame and cylinder has a nice even gloss finish and all metal edges are crisp. The two-piece stocks fit very well and are finished in Uberti’s regular red/brown varnish. You will notice an assembly number stamped into the frame and correspondingly written onto the right grip panel. The grips are fitted to the gun while it is in the white, and this number ensures that the wood goes back onto the same frame after finishing.

The hammer is case coloured and has a flat nose which, when at rest, fits into any one of the six notches between the nipple recesses on the rear of the cylinder, to act as a safety. The slots used for rotating the cylinder have nice long run-in grooves, so the hand makes a positive connection every time, even with rapid fire. The nipple recesses are fairly large and the nipples themselves are angled slightly outwards, making capping easy. The barrel is tapered and has seven groove rifling with a left-hand twist.

While the Colt uses a screw to fasten the mainspring into the rear of the trigger guard, Remington chose to make the end of the spring a little thicker (in the case of Uberti by folding the end) and slip it into a slot in the guard. Simple and easy to fit. A screw entering from the front of the guard allows you to alter the tension on the spring, a facility not found on the Colt.

The front sight is a fairly tall ‘hollow ground’, round-topped blade on a base which is dovetailed into the barrel flat and allows lateral movement for windage adjustment. The rear is a wide groove running the length of the top strap and culminating in a v-notch at the back.

Like the majority of percussion revolvers of the day, the NMA uses a hinged lever and plug for loading. Fastened with a catch and latch just under the muzzle, the lever has an extended ‘sail’ which gives it more strength than the usual round rod. All of these minor details add up to a well-thought-out revolver, which is a credit to Fordyce Beals and his team who laid the groundwork over 150 years ago.

A winner in war or peace

The grips on the Uberti NMA may not suit those with larger hands, so compare it with others if you are considering a purchase, but if it suits you, it will perform admirably. The hammer, which at rest sits a little lower than the Colt due to a shorter spur (a factor helping those with smaller hands), cocks very easily and cylinder lock-up is rock solid. The cylinder locking notches have a very small run-in slot compared to a Colt and could possibly lead to drag marks in later life. It has a wide, flat trigger that breaks crisply with no creep and the balance is excellent.

There is a generous loading cut-out in front of the cylinder, which makes seating a ball easy. Using a .454” round lead ball, behind which was a thin lubricated wad and 25-grains of Henry Krank fine black powder, touched off with a Remington cap, recoil was modest and whilst this is not an out-and-out target pistol, accuracy at 25 yards was quite decent, even with my old hands! I could cover most 5-shot groups with the palm of my hand. The sight picture is adequate and I did not alter the front blade, but the provision of windage adjustment and the fact that you could shave a bit off that tall sight if needed gives the opportunity to tweak the gun to your personal needs.

The barrel-to-cylinder gap is extremely tight and I was into my sixth reload (six shots each time) before I began to feel the binding effect of black powder fouling. Dropping the lever (the catch & latch set-up is very secure) allows you to pull out the cylinder arbour (it won’t come all the way out unless you take its retaining screw out) and with the hammer on half cock, drop the cylinder. After a quick clean, put a smear of grease on the arbour before re-assembling and you are off for another 40 shots or so.

The solid frame of the Remington is not only stronger than the Colt but offers another advantage, in that it does not suffer from the ‘spent cap in the hammer slot’ that can often plague the open top design. I have been a dyedin- the-wool Colt fan for 40 years but must admit that, in the heat of a battle or on a competition line, I’d opt for this pistol.

A glance at the Henry Krank catalogue or website shows the NMA revolver available with a 5.5” barrel, with both sizes also offered in stainless steel at a premium. There is also a .36 calibre Navy version.

The argument as to which is the better of the two pistols, Remington or Colt, has raged since they were competitors in the middle of the 19th century and will certainly continue for decades to come. Without a doubt, the Remington, with its solid frame, is a stronger gun, but Colt sold almost a million open-top percussion revolvers in their various guises, and Uberti is still doing so today, so it must have something going for it. In my eyes, it’s a better looker too!.