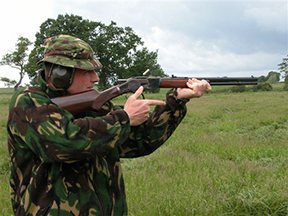 I bought my first lever-action rifle in 1976, it was a Winchester 94 chambered in 30-30 WCF. This was my first introduction to the design and since that time I’ve owned all sorts including, Ubertis, Marlins and Brownings in a wide range of calibres and types. Today I have a BLR Lite in 300 WSM in my rack, which is about as far removed as you can get from the classic, magazine-under-barrel design that’s well over 120-years old. But of all these, my favourite is Uberti’s excellent reproduction of the Winchester 1873.

My interest in what I consider as the finest Winchester design ever, stems back to the good old handgun days. Back in 1994 I got hooked up in what was then known as Western Action Shooting. Practical by nature, the discipline used revolvers, rifles and shotguns of the late American 1800s. Cowboy guns might be the better term! And one of the pre-requisites was a pistol-calibre lever-action rifle. Up until that time, I had admired the 1873 but had no use for one, so here was the perfect excuse. Whilst others were buying the more modern Marlin 1894, Winchester 94 AE and cheaper Rossi Puma, I opted for the traditional 73 as recreated by Aldo Uberti.

My weapon of choice was the 1873 Sporting Rifle, chambered in 44-40 WCF, it showed an unfeasibly long 30” octagonal barrel. Originally I had intended to get a 24”, but when it came through the door I fell in love with it and the rest is history. I used it extensively for over three years and it shot well and was capable of good performance out to 200-yards even with its seemingly basic sights. After the handgun ban I finally got rid of it as I no longer shot Western Action events, but I will always remember it fondly.

My rifle used the standard straight hand butt, but Uberti also offered a pistol grip version that they call the Special Sporting and, although I had never shot one, I thought it looked good. So I thought I would see if the changes make it better or just different.

The 1873 owes something to the earlier Henry lever-action and nothing to the later 1886, 1892, 1894 and box mag 1895 - all the brain children of John Moses Browning. Designed for pistol-calibres, the mechanism uses a toggle lock and a vertical feed block to transport the cartridges from magazine to the chamber. So the action can be considered a reasonably weak one, which is reflected in the choice of calibres available. On that matter I opted for 357 Magnum, which will also take the shorter but otherwise identical 38 Special, which these days - with less choice - represents a good option. As for short range use, at 25, 50 and even 100-yards this mild recoiling and potentially accurate cartridge is very good indeed. If you feel the need to push it out to 200, the extra oomph of the more powerful 357 will do the job.

As ever the Special Sporter is beautifully presented. The receiver is colour case-hardened, the barrel octagonal and nicely blued, with a matching steel crescent-style butt plate. The woodwork is a medium coloured walnut, with both pistol grip and forend chequered fore grip, which I did prefer. As ever this item has a steel end cap. On that matter the wrist did feel wider than I recall, and the more curved grip angle has made Uberti slightly contour the underside of the operating lever to suit. This example was the 20”, which I found a bit on the short side; preferring as I do the longer style. But a 24” option is also available. In truth, and for most uses, this is of little importance and only governs your capacity, as the mag tube runs the full length to the muzzle. But the payload is still good, as it will hold 12 X 38 Spls, or 11 X 357 Magnums, which is more than enough for just about any use or discipline.

Sights consist of a semi Buckhorn, elevator/wedge at the rear with a deep U-notch and a medium width blade up front. Both units are set in dovetails to give windage adjustment, with the base of the blade showing a small jam screw to keep it in place. Elevation correction is just a matter of lifting up the rear of the sight and sliding the wedge forward and back. There are other options of the Special Sporting with a tang and tunnel sight included in the package and they do improve accuracy at longer ranges. But and by the same token - are not so easy to get on to at shorter distances, in truth for most uses the standard set up is more than adequate…

The sliding dust cover over the ejection port is peculiar to the 1873; quite an advanced concept for its day. Manually closed it automatically opens as the action is cocked. Loading is by a sprung gate on the right side of the receiver. As ever with a tube magazine, bullet shape is important, as round or pointed nose ammo is not the best choice. The Prvi Partizan offered a semi-wad cutter in 38 Spl and a truncated cone in 357 Mag, both weighing in at the standard 158-grains.

Of the two; the longer 357 mag with its angled ogive loaded easier, over the shorter/stepped 38 Spl bullet. Shooting the rifle at 50 and 100-yards showed that it’s all about target size and sights. Holding that thickish blade on to a small bullseye is not ideal. But you can expect about 2” @ 50 and 4-5” @ 100-yards on average.

The 1873 action shows a trigger block plunger protruding from the lower tang. This ensures that the lever has to be up against the underside of the action, other wise the gun will not fire.

With this pistol grip butt version, I found the minimal curve that Uberti have applied to the operating lever to make it conform to the concavity of the inside of the grip springs it out a little. To me, used as I am to the straight-hand style of my 1873 Sporter, I did feel that my hand was forced and it felt a bit unnatural. Experimentation showed that I did not need to squeeze the lever right up tight to disengage the trigger block.  There was enough upwards movement to do the job just by swinging your thumb over the tang and taking a slight pressure. Another aspect of the design is the rotary catch that locks the operating lever for storage.

Overall the 1873 Special Sporting performed as well as my old 73 Sporting Rifle, in terms of accuracy and reliability. Like most Uberti firearms, a hundred rounds has it run in nicely. Having come back to this model after a few years away leads me to two conclusions: firstly - though I like the look of the pistol grip butt, I would stay with the straight hand version, as it feels more natural to hold and operate, though I thought the chequering was an improvement. Secondly - the 357 Magnum chambering is by far the best choice for today’s shooter . My rifle was in 44-40 WCF - a lovely classic round, but apart from being historically correct; no real point, as 38/357 will do everything it will, is more versatile and is readily available…

Overall a nice rifle and one to pick if you want traditional, but if you want something for Action shooting then stay away, as fitting things like Red Dot sight or scopes is problematic.