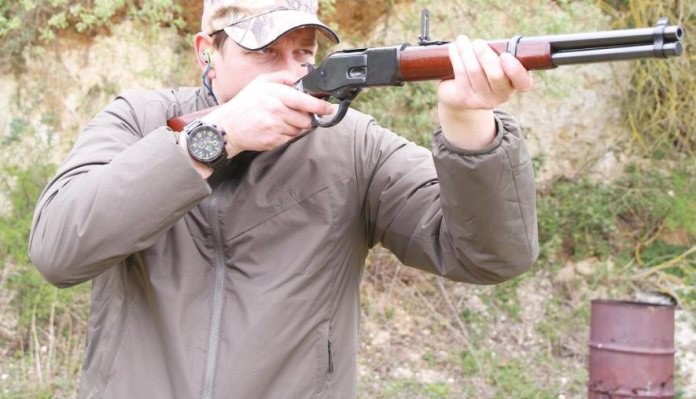 I’ve said it before, but and regardless of this design’s antiquity, I consider the Winchester 1873 lever-action rifle to be the best of the bunch. OK, I’d be the first to admit that, when compared to the later Winchester Models 92 and 94, are mechanically better designs, as is Marlin’s 1894, which is probably the superior of them all, in terms of a more traditional tube magazine guns that has survived to this day. However, if you want classic, then it’s hard to beat the 73.

I owned a Uberti reproduction of the 1873 for a number of years and used it for Classic events, Cowboy Action and just plain enjoyable shooting. It was a Sporter version with a top end colour case-hardened action, beautiful blued finish and some nice timber also, a bit unusual, as it showed a 30”, octagonal barrel, which I believe was never an option Winchester offered, but as long as it was, I kinda’ liked it for its unique looks. It was also chambered in the original calibre of 44-40 WCF (Winchester Centre Fire), I believe it was US gun writer Elmer Keith that said of this cartridge: “it has killed more game big and small and more men good and bad than any other of its day.”

Volcanic closed in 1856, but the principle lived on in the 1860 Henry, designed by Benjamin Tyler Henry. The rifle was unusual in that it did not have a forend and loaded from a rotary trap under the muzzle with an external lug on the follower running in a slot on the underside of the magazine tube. Chambered in 44 rimfire, it was probably the first practical firearm of its type and made quite an impact for its time.

To cut a long story short, the design was picked up by Oliver Winchester and modified into the 1866 (Yellow Boy) due to its bronze/ brass, gunmetal frame and addressed the two major issues of the Henry with a wooden forend and Nelson King designed loading port in the side of the receiver, which did away with that external, magazine lug too. The 66 morphed into the 73, which substituted an iron frame over the weaker gunmetal and ejection port cover and finally into the 1876, a larger calibre version, which probably pushed the toggle locking system to its limit. Subsequent and stronger models – 1886, 1892, 1894 and 1895 were all designed by John Moses Browning for Winchester, some of which are still in production today.

However, due to the interest in classic firearms from various periods of history, military re-enactment and Cowboy Action Shooting over the last few decades, has allowed primarily Italian companies to reproduce these great guns of the past. One such is Uberti, who offer a massive range of primarily revolvers and rifles from the American western period, that includes the Henry, 1866, 1873 and 1876 lever-actions. If you have never experienced the level of quality of Uberti’s historical reproductions, you are in for a treat! The steel, colour case-hardened action, hammer, trigger and lever are beautifully finished and each one is unique as to pattern. The blueing is deep, rich and well struck off. The wood is walnut and well matched with a varnish finish, which is nice, but be careful as it scratches easily, general wood to metal fit superb.

There are a number of models and options with the 1873, with calibre choice offering 357 Magnum, 44-40 WCF, 44 Magnum and 45 Colt. To be honest and for we Brits, unless you want to be authentic, then go for the 357, ammo is plentiful and reloading easy, as we shall see. As a fan of the colour case-hardened models, I thought I’d try something different and importers Henry Krank sent me down the blued, 16”, Trapper Carbine in 357 Magnum.

They also supplied Prvi Partizan (PPU) 357 Magnum 158-grain plated/truncated cone ammunition and 158-grain lead semi wadcutter (SWC) in 38 Special, along with Lee, deluxe reloading dies, Ramshot True Blue powder, PPU cases and their own, 158-grain hard-cast lead bullets. The real beauty of any 357, is that the firearm can also shoot the 38 Special, as it’s nothing but a shortened version of the former cartridge. Case length in 38 is 1.155” and 1.29” in 357 and cartridge overall length (COL) 1.55” and 1.59” accordingly. Fed with lead bullets and pushed at sensible velocities, they represent cost-effective and accurate reloads. I will be looking in detail at the Lee die set and reloading the calibre next month.

The Trapper is available in 357 Mag and 45 Colt, the former seems best suited. Compared to my 30” Sporter, it’s a handy little rifle, with a capacity of 8 + 1. It’s also iron sights only, as it ejects up and back, which precludes fitting a scope over the action, which might colour your choice if you shoot these pistol-calibre guns in modern competition, where optics are allowed, if not mandatory. Me, I like to keep it pure, so irons are fine. On this model, they consist of a flip-up ladder with sliding V notch at the rear, so that you can adjust for range. When folded down, there’s a fixed notch for closer range use. Up front, is a fixed blade, with adjustment all on the rear, as it sits on a dovetail and can be drifted left or right. I prefer the semi-buckhorn elevator wedge unit on my old Sporter!

This Trapper is all blued with the exception of the operating lever, which is colour case-hardened and the brass feed block. It shows a barrel/magazine band up front that mounts the sight blade and a second one on the forend. Wood is the usual dark walnut with varnish finish, giving it a distinctive ruddy look; the forend is slim and the butt has straight-hand layout with a curved steel plate, which feels very natural. Unusually, the operating lever can be locked by a rotating catch at the rear of the grip

The toggle locking system should be thought of as like a knee joint; with the action closed, it forms a horizontal strut to hold the breech closed, as the lever is opened, the joint is pulled down and hinges so that the action can open. The sliding ejection port cover I have always thought was quite far ahead of its day, as it does stop gunk getting inside. When forward, it automatically opens as the action is cycled but must be manually closed.

The 1873 loads through a sprung gate in the right side of the action, like most tube-magazine lever-actions, but uses a fixedlength, brass vertical feed block, as opposed to a hinged lever like the Winchester 92/94 and Marlin 1894. This is COL sensitive, as if the round is too long, it will go into the magazine but when released backwards into the feed block the nose of the bullet will not clear the mag tube and jam the action. So, be aware; it has happened to me and is a real pain to fix.

Equally, the tube magazine stacks the ammunition bullet to primer, so it’s essential to use flat-nosed bullets to stop a chain fire, where the recoil would push the nose of a pointed bullet into the primer and set it off. You might get away with it with a round nose, but I would not chance it. Equally, if you are reloading, then the primers must be seated below the pocket by at least 0.010” too, which is common practice anyway. This applies to any lever-action of this type. For the test, I used Prvi Partizan (PPU) 158-grain, 357 Mag and 38 Special, also imported by Henry Krank & Co Ltd and it’s good stuff, with Boxer-primed cases so reloadable too. I also used the 158-grain semi wad cutter reload!

The operating lever features a safety interlock plunger. Here, the lever must be squeezed up against the underside grip to unlock the trigger; simple and effective. There’s no manual safety; instead, the hammer offers ½ and full cock notches, the former giving a safe carry with a round in the chamber. Another aspect of the hammer, is the fact that when it’s at rest, its high spur blocks the sights, which is a bit annoying.

The 1873 loads easily and is smooth in operation and has that solid feel and pleasing looks. Uberti’s line of classic lever-actions sit in a distinct historical slot, so you should know what you are getting into before you buy. Accuracy with iron sights is identical with the competition, although the action stroke is maybe a bit longer and slower. Trigger pull was firm and of medium weight, not amazing but workable, accuracy was commensurate with the mandatory iron sights and at 100m was grouping around four inches. As I said, this rifle is for more dedicated shooting like Western or Classic events and for the joy of a near perfect recreation of an original and iconic design gives.