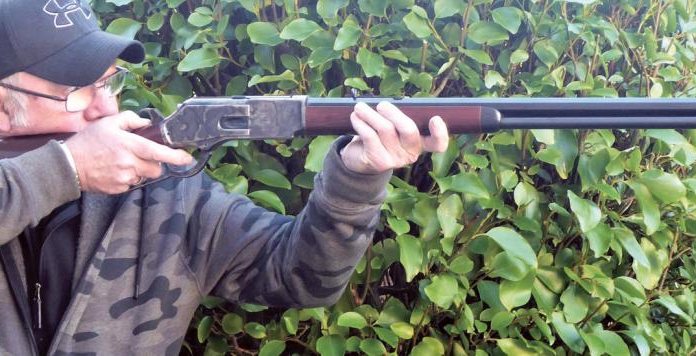 Lever action rifles are undeniably associated with the American West and the name that comes to mind immediately regarding these guns is Winchester. Whilst there were other manufacturers, Marlin, Whitney, Burgess, Colt, offering this type of rifle, Winchester, for whatever reason, became a byword for lever action. Doubtless the movie industry played a large part, as the Model 1892 has appeared in just about every Western film made, regardless of the film’s time frame! The Model 1873 even had top billing in one movie.

It was the Winchester ’73 that really put the company on the map after the success of their first repeater, the Model 1866. Initially introduced in .44 Winchester Centre Fire (.44-40), the advantage of its reloadable cartridge cases was not lost on shooters of the day. Other calibres followed (.38-40, .32-20 & .22RF) but none were really suitable for the big game that was encountered throughout the continent and Winchester soon realised that they needed a more powerful rifle if they were to compete with the big single shot offerings from their rivals. Seeing themselves as repeating rifle manufacturers, this was the route they chose, and it was not until 1885 that they began to compete in the single shot market.

At the 1876 Philadelphia Centennial Exposition, commemorating the anniversary of the Revolutionary War, Winchester announced its new rifle, the Centennial Model, or Model 1876 as it became known. Chambered for the .45-75 cartridge, the new gun was little more than an enlarged version of the Model 1873 and was their last gun to use the toggle link mechanism of the earlier models. This mechanism was the limiting factor in the choice of cartridges for the 1876, and although Winchester would have liked to offer a repeater capable of handling the .45-70 Government cartridge, it was deemed that the action was not strong enough to handle the 405 and 500-grain bullets.

As produced, the action was also not capable of handling cartridges with an overall length exceeding 2¼-inches. So, although the .45-75 had a larger powder charge than the Government cartridge, it used a shorter, fatter bottle-neck case and a 350-grain bullet. Other calibres were offered, the largest of which was a .50-95, but the 350-grain bullet weight was not exceeded. It was not until 1886 that Winchester finally offered a repeating rifle that could handle the powerful .45-70 Government cartridge, thanks to the genius of John M. Browning.

Offered as a carbine, rifle or musket, the model was produced from 1876 to 1897 with a little under 64,000 units leaving the factory. This comparatively low production figure makes high condition examples of the Model 1876 a much sought-after prize by collectors. The .45-75 carbine was favoured by the Canadian Northwest Mounted Police, who used it for almost three decades. For the movie Tom Horn, Steve McQueen used an original Model 1876, which was manufactured in 1882 and chambered in .45-75. This model was also one of the favourites of future president Teddy Roosevelt.

After buying, selling, shooting and studying Winchester lever action rifles and their clones for the last thirty years, it struck me that this is the first time I have handled an 1876! I guess the reproductions are as uncommon as originals, although this Uberti version has been around for ten years or so. My initial impression was that this is a big gun. Of the three popular reproductions on the market today, the 1866, 1873 and 1892, the Model ’73 has the largest receiver, but the 1876 is a ’73 on steroids. Its 28-inch barrel is 4-inches longer than the standard rifle length on the other three models and is a much larger profile, reminiscent of the big single shot rifles.

The case colours on this example, covering the receiver, lever hammer and trigger, are rather pale and principally grey. All the rest of the metal work is black, apart from the internal mechanism. The walnut stock and forearm have the Uberti red/ brown stain and the stock looks to be a fairly nice piece of wood that would probably be enhanced by an oil finish. I have seen a number of Ubertis over the years where the owner has rubbed off the factory finish and applied oil and in every case, there was an improvement in the appearance. All the edges are fairly sharp and the wood to metal fit is generally very good with some very slightly raised edges. The butt plate has a sliding cover over a recess in the stock, which takes a four-piece brass cleaning rod that can be supplied as an optional extra.

The rear sight is a semi-buckhorn that is adjustable for windage and elevation and the front is a tapered blade, which can be moved laterally. Both are locked in place by a screw. These same sights are found on several of the long gun offerings from the Uberti catalogue. The top tang is tapped to accept one of the long-range sights, which are available from Uberti and others.

The top of the receiver has a sliding dust cover, a big plus when travelling in the old West but probably less functional today but is an authentic touch. From the closed position, the cover opens when the lever is operated, allowing spent cases to be ejected, but must be closed manually. The calibre marking is stamped on the top flat of the barrel behind the rear sight but another little nod towards authenticity is the engraving of the rifle’s calibre, in period script, on the bottom of the brass cartridge lifter. The rifle is equipped with a trigger block safety mechanism, which requires the lever to be squeezed up to the bottom tang before the trigger can be released, and the lever has a winged retaining nut.

Uberti’s recreation of the 1876 is offered in the same four calibres as the original, all of which are classed as obsolete in Barne’s Cartridges of the World, but, being modern reproductions, these guns unfortunately require a Firearms Certificate in the UK. For the purpose of this test, I was supplied with a .45-60 example by Henry Krank, along with a set of Lee reloading dies for this calibre. So far, so good. ‘What about cases?’ I asked. Apparently, there are Bertram cases available at over three quid a pop. Ouch! An American company called Jameson manufactures these cases but only does sporadic production runs and a check on an American shooting forum shows a long line of customers waiting over there. They are seemingly not marketed here anyway. Fortunately, the .45-60 is little more than a shortened .45-70; so, it was just a matter (apparently) of trimming some of the latter’s cases to the required length, a nominal 1.89-inches. Thanks to Jeff Davidson that was done in very short order. Next, I needed some bullets. The original for these rifles was a 300-grain RNFP lead, but again, not something that is easily found off the shelf, so casting is the way to go. Lyman manufacture a mould that replicates the original bullets (albeit at 292-grains) and, had this been my rifle, I would have probably have bought one, but not for a short review. I was offered some bullets cast from such a mould but at £40 per hundred plus shipping I felt they were a little (about double) overpriced!

Lee to the rescue!

I finally settled on some 320-grain supplied at a more reasonable cost by Rising Sun Ordnance along with a 340-grain version cast from a Lee mould, which I had on hand. Loading data for this cartridge is very thin on the ground and it meant trawling several shooting forums for a solution, and even then, the majority of what I found was for the Lyman bullet. I was eventually able to configure a couple of smokeless loads suitable for the bullets that I had available. I could of course have gone down the black powder route, but I will leave that for another day. I loaded twenty of each - for the heavier bullet I used 26-grains of IMR4198 powder and the lighter version was backed by 13-grains of Trail Boss, both of which worked well.

Cutting down the .45-70 cases is obviously the economical way to get the brass for this cartridge, but the proper .45-60 case has a slightly thinner rim than its big brother and I found stories of the cut-down cases not functioning too well in some examples of the Uberti 1876. A number of shooters found the need to thin down the rim in order to get reliable extraction, a job I did not fancy, as the excess would have to be taken from the top side of the rim in order to leave the primer pocket at the correct depth. I made up a dummy round and, thankfully, it loaded and ejected just fine. What I did notice is that the loading gate, really just a piece of spring steel, is very strong and snaps shut like Ronnie Barker’s till in Open All Hours! Combined with very sharp edges on this and the loading port, the case was badly scratched on loading. Again, had this been my rifle I would have smoothed off those edges a little and maybe lightened the spring.

Mindful of this gate, I began by loading the cartridges one at a time through the top, just to see that the loads were okay. Satisfied that there were no problems, I pushed three cartridges into the magazine and worked the lever. Jam up! The cartridge lifter would not come up, so there were three rounds stuck in the gun and no available screw driver to remove the end cap of the magazine, so the test was over for the day.

Back home, I found the cartridges were a tad too long and a little more research showed that others had experienced the same problem. I trimmed 0.07- inch off three cases and made up dummies, which worked just fine. The 30 or so remaining cartridges were pulled, cases trimmed and reloaded, along with another twenty of each load.

A second outing proved much more successful and passed without a hitch, although I could not duplicate the 1½- inch groups that some American shooters are claiming at one hundred yards. This is obviously a cartridge that needs to be tailored to your individual rifle and a lot of experimenting with loads will doubtless pay dividends. Those scratched cases also need some attention.

As mentioned above, this is a big rifle and, at 10¼lbs, I felt that recoil would not be a problem and so it turned out. With the loads used, it is not quite as severe as a .45-70 rifle but, although not too uncomfortable, is not something I would want to shoot all day. As much as I would like to complete my reproduction lever gun collection with one of these, plus an 1886, I figure that six lever action rifles are enough for anyone, so will resist the urge. Then again, if the Premium Bonds come up…

Caution – the loads used in this article worked in the rifle on test. Neither the author nor Gun Mart magazine warrants their use in any other rifle. Please check all available data to determine a suitable load for your gun.