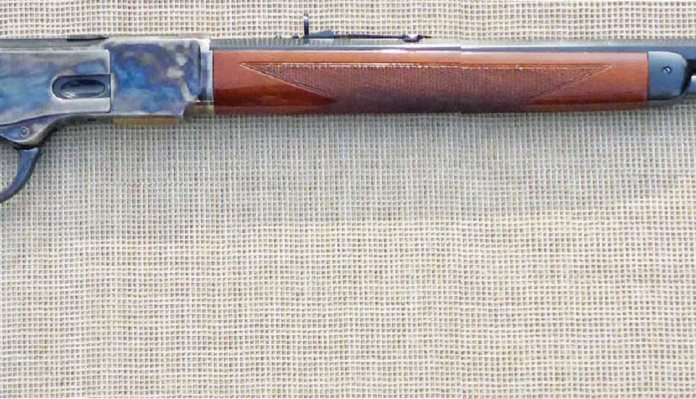 On more than one occasion I have mentioned that it is worthwhile checking out the second-hand stock when visiting your local gun shop. Once again it paid off on a visit to Henry Krank last year when I spotted this rifle in the rack. Manufactured in 2006, the gun is in super condition and looks like it has spent most of its life in a safe. Either that or the previous owner was exceptionally fastidious in looking after it, with only the odd minor ding where it has probably been caught taking it in and out of the safe. My first gun when I started shooting was a Smith & Wesson 686 in .357 magnum, after which I gravitated towards guns from the American West, both revolvers and long guns, which in the latter case meant lever action models. In the ensuing years I have reviewed one or two rifles in .357 magnum but have never actually owned one, so it was a no brainer that, at the price, this one was coming home with me.

The mechanism is derived from earlier Volcanic firearms and in this form was first offered in the Henry rifle, then in its successor the model 1866, with the final adaptation coming in the form of the Model 1876, by which time it was felt the action had reached its limit. When the 1873 Model was introduced to the public, with its brass cartridge cases (previous rimfire models had used copper cases) that could be reloaded, it was an instant success. Winchester offered a complete set of reloading tools, including bullet mould, wad cutter, powder measuring cup and the hand-held “press”, for the princely sum of five dollars. Centre fire options were limited to .32 WCF (.32- 20), .38 WCF (.38-400) and .44 WCF (.44-40) with a small number being made .22 rimfire, so today’s shooters have a wider choice of calibres than their 19th Century counterparts. Check out the Henry Krank website or catalogue to see the choices available.

Around 1878 Winchester introduced the trigger block safety to this model, which prevented the trigger from being depressed unless the lever was fully closed. This necessitated a slight change to the shape of the lever with a projection added that depresses the trigger block. Another feature on this model was the sliding dust cover on top of the ejection port which, when closed, prevented the ingress of foreign matter into the action. If closed, the cover opens when the lever is operated and remains open until the shooter closes it by hand. The lever has a projection at the rear of the trigger guard portion and a latch on the bottom tang holds the lever in place for carriage, a system that was introduced with the 1860 Henry rifle.

A distinguishing characteristic of this model and its successor, the Model 1876, is the easily removeable side plates on the mechanism, allowing easy access to the linkage system. This makes cleaning of this area very simple and allows you to check the pins and toggles for wear.

For a couple of years from 1875, Winchester offered customers a “One of One Thousand” variation, rifles said to be more accurate than the general run of production. They had a higher grade of wood and better blueing and case hardening, along with set triggers, and retailed at $100.00 each. Only 136 of these rifles were produced and when the movie Winchester ’73 premiered in 1950, the whereabouts of many of these guns was unknown. In order to update the factory records, Winchester asked owners to send in details of their rifles, for which they would be rewarded with a new Model 1894 rifle. It is not known how many owners responded but by 1961 a large part of the production was still unaccounted for.

Over the years I have owned or shot every one of Uberti’s lever action rifles, other than the latest Model 1894, which is yet to be imported into the UK, and have yet to find one that did not perform well. The simplicity of the toggle link action, sometimes touted as its weak point, means that there is very little to go wrong, but it would be wise not to stoke the magnum versions above the factory specification of their respective cartridges.

Back in the day Winchester would provide you with any barrel length you wanted, with anything coming in over the standard 24-inches being charged at one dollar per extra inch. Today Uberti offer a variety of lengths ranging from a tad over 16-inches up to 30-inches, a couple of the shorter ones having round barrels with the rest being octagonal. There are a couple with half octagonal – half round barrels, a particularly attractive option in my eyes. The majority have the crescent style butt-plate that we have here with the carbines having a less distinctive curve. There is also a flat butt ‘competition’ model which comes with a short stroke kit fitted at the factory. This model is aimed, as its name suggests, at competitors looking to shave those fractions of a second off their times in CAS competitions, by reducing the length of travel of the lever when cocking the rifle. This model is available only in .357 magnum and .45 Colt calibres and is priced, surprisingly, the same as the standard models.

The majority of the Uberti versions of this rifle come with the standard straight stock but the “Special” model that we have here comes with the pistol grip stock and this area, along with the forearm, is chequered. There are four barrel lengths of Specials, 18-, 20-, 24¼- and 30-inches, with half a dozen calibres, and all come with the crescent butt-plate.

From the metalwork point of view, this is a standard finish gun with the barrel, magazine tube and butt-plate, along with a couple of small bits, being blued and, in this case, there is a nice gloss finish with all edges on the barrel being well-defined. The receiver, lever and hammer are case coloured, and this example shows some of the nicest colours I have seen in a while. The Uberti website shows a carbine with full blue finish but this is not listed by Henry Krank.

The two pieces of walnut are finished in Uberti’s high gloss varnish and the chequering at wrist and forearm is well-executed. The forearm is rather plain, but the stock shows some nice grain and would likely prove a good candidate for stripping and oiling, a job I have considered on each occasion that I have added a Uberti to the stable. One of these days… Wood to metal fit is very good throughout with only very tiny raised edges in some places.

The standard rear sight on this gun is the semi-buckhorn arrangement which is adjustable laterally. The front is a sail-like blade on a base dovetailed into the top flat of the barrel and this again is adjustable for windage, with a small screw locking it in place. The set-up works very well but I have replaced the rear sight with a Marble Arms Bullseye model from Brownells, which improves the picture for my old eyes. I feel it will be better still with a bead front so will either buy a matching Marble version or modify the existing sight with the addition of an old brass shotgun bead. The base on this new sight was a tad larger than the cut-out in the barrel so had to be taken down to fit. This was a case of a bit of filing and try it, a bit more and try it until it is a very tight fit and does not need a fixing screw as was fitted in the original sight.

First time out was with 50-rounds of PPU factory ammunition at around 50-yards and it was going just about where I pointed it. I was immediately aware of a very heavy trigger pull, something which will have to be addressed sooner rather than later, but the trigger does break without any creep. Bringing the gun indoors to 25- metres with home loaded ammunition (5.3-grains of Unique behind a 158-grain RNFP bullet) showed it to be printing slightly to the right, and examination indicated that the front sight was not centred – an easy fix. Feed and extraction were faultless, as I would expect. For anyone thinking of using a Model 1873 for gallery rifle, be aware that extraction is vertical which impedes the fitting of an optical device.

The loading gate, or ladle as Uberti name it, is a simple piece of spring steel fastened to the inside of the right side plate, and this one feels much stronger than others I have encountered. I feed each round leaving the head holding the gate open and then push the last one all the way in, and this gate works similar to Ronnie Barker’s till in trying to nip your finger! I am wary of trying to lighten this as I’ve seen these snap in the past, so a small length of 8mm wood dowel now acts as a push rod.

Tube fed lever action rifles can often be fussy over the correct length of the loaded cartridge, too short or too long can cause a jam. With these toggle link actions – the Henry, Model 1866, Model 1873 and 1876 – opening the lever fully raises the brass carrier block so that, turning the rifle upside down, you have a built-in cartridge length gauge in the open slot.

Coming in at around 8lbs this is not a particularly heavy gun, but it controls the .357 magnum recoil easily. Although I think this barrel length is the most attractive in a lever gun (I’ve tried the 30-inch and it feels really unwieldly), CAS shooters will probably prefer the lighter twenty-inch model for its slightly faster handling characteristics.

It has taken me a while to get my first .357 long gun, but I feel it was worth the wait; this one won’t be going anywhere soon.