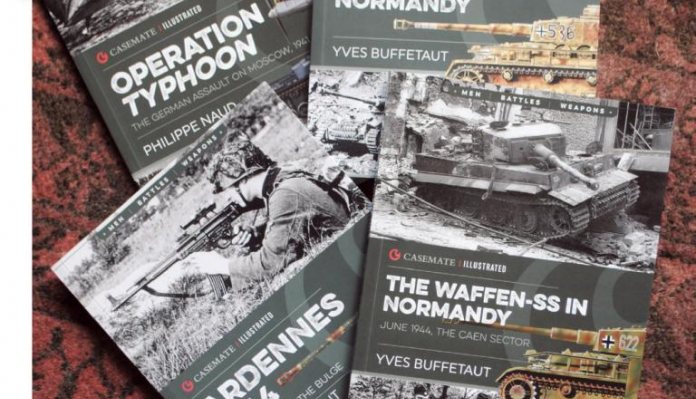 It is said that ‘A picture is worth a thousand words’, but the same can also be said of maps and diagrams, because these add more information to any historical analysis. Along with an excellent text, such a combination presents a prescient assessment for anyone interested military history, especially WWII.

Documentaries and films fuel this interest, books, however, such as the new Casemate ‘Illustrated Men, Battles; Weapons’ series not only fuel that interest, they positively satiate it with facts, figures and details on a finite level. The titles in the series are unquestionably reliable, following many years of dedicated research by authors such as Yves Buffetaut and Philippe Naud, each of whom is a highly respected historian. These, and all the other authors of the series, have reputations which guarantees the accuracy of these as dependable works of reference.

Some of the titles have been available for some time but previously only in French. Now, however, Casemate Publishing of Oxford, have translated these titles and released them in English much to the delight of military enthusiasts in Britain. The series is produced to a set format and size, each with a content of 128 pages and priced at £19.99.

As military enthusiasts, will appreciate, campaigns and battles often cover an area stretching across many miles and have a duration lasting days or weeks. These actions also involve many different aspects of fighting, regiments and service branches, such as tanks and artillery. These works undertake to look at various aspects of a campaign and present each part as a ‘slice’ of the action. For example, there are already several titles in the series which examine separate aspects of the Normandy campaign, including ‘German Armor’, ‘Allied Armor’ and ‘The Waffen-SS in Normandy’.

Other titles in this important series cover subject matters further afield, including ‘Operation Typhoon’, the German attack against Moscow in 1941, ‘Moscow to Stalingrad’ and ‘Ardennes 1944’, otherwise known as ‘The Battle of the Bulge’. Each title contains a wealth of information for their condensed size, such as unit structures, timelines, comprehensive text and profiles of unit commanders. Details of weapons, aircraft, vehicles and equipment are given, which is useful for those readers interested in the military hardware.

The photographs are superb and most have been carefully researched to provide as much information in the accompanying captions as possible. The maps have basic details, which is not a bad thing, because by adhering to what is relevant there is no distraction. It is not often that it can be said a book contains something for everyone, but in this series that is certainly the case. The artwork of vehicles, artillery and aircraft will provide many useful facts, which modellers will find essential reference points.

War gamers will enjoy the details and find the maps and other diagrams useful. Even as a general interest read, these titles are fascinating. More titles in the series are promised and these will add to the shelves of any enthusiast’s reference library. The format size of the books, 254mmX178mm, means they can be carried easily in a small bag, to be enjoyed during a journey, such as travelling on a battlefield tour. This is a series which comes highly recommended and will make an ideal gift for either birthday or Christmas present. Full details of the series and other titles from Casemate can be found on the website at: casematepublishers.co.uk.