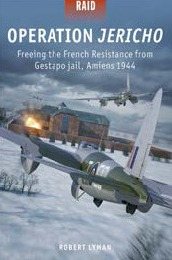 Most books on bombing missions during WWII tend to focus on the well-known operations, such as the Dam Busters, the attacks on Tirpitz and the Schweinfurt raids. This title reminds readers of one of the most audacious, low-level raids conducted against a precision target. Operation Jericho was launched on the 18th February 1944 to attack the prison at Amiens in order to release French resistance fighters to prevent the Germans from getting vital information from them. The book takes the reader through each stage, from the reason for the attack, the plan itself, the biographies of the pilots and their first-hand accounts. The attack was undertaken at rooftop height using the main road through the town as their line of approach at speeds in excess of 200mph, to hit the walls of the prison only 20 feet high. This is a well-told and gripping account of an epic operation, all the more so because it is true.