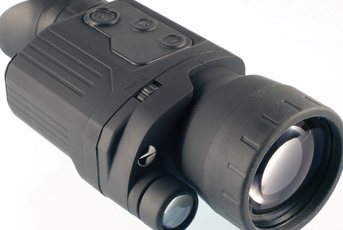 The 750 like all in the range is compact, lightweight with superb image quality. There are four working display modes that are chosen using the 3-pressure pad buttons on top of the rubberised and waterproof casing. All switches are nicely sized and have letters or a symbol indication as to their function. The one closest to the eyepiece is the ON/OFF, and then you have two buttons set further forward from this. ‘IR’ obviously operating the onboard (805nm) Infra Red illuminator and the raised ‘square’ shape symbol on the switch set forward of this alters the ‘colour’ of the sight picture..

First touch enhances contrast of the monochrome image, a second changes it to the NV analogue green and a third changes it to red! It does seem to slightly lesson the detection range but is recommended to reduce eye-strain for prolonged observation – which it does! Further forward and to the right is the rheostat, which works smoothly and has a ridged edge that makes for easy operation.

Four AA alkaline batteries are housed in the rear to the right of the eyepiece. Switch on with the front cover cap on or off as these units are not harmed by daylight, but a sudden bright flash will activate a safety cut off switch so no internal damage occurs. A battery status light positioned at the top rear comes on green when the monocular is switched on, when power is low it shows red.

To focus, first locate an object up to 25-30 yds away then adjust image brightness using the rheostat, turn the easy-grip eyepiece and objective lens until a sharp clear sight picture is obtained. Like similar digital NV units you get an oblong sight picture, switch the IR on it becomes circular!

When changing viewing distance turn the objective housing in conjunction with the rheostat as when setting initial focus. Don’t adjust the eyepiece as this is now set for your eye. The ocular rubber eye-shade moves independently from the eyepiece so once set, move it as required and it quietly yet audibly clicks positively to where required.

In reasonable ambient light I found the sight picture akin to the Digi-Sight N750 NV Riflescope as it’s obviously using the same up-graded circuitry. Thomas Jacks say the in-built eye-safe IR is powerful enough and in virtually all situations extra IR shouldn’t be needed – better to spend the extra on the MPR Player/Recorder (DVR) they offer. The Recon 750 can record what you view using the USB ‘out’ connector attached to an MPR Player/Recorder (DVR) via the cable supplied.

As for viewing distance and clear identification of quarry I’d say on a night of reasonable ambient light without IR out to 120-yds for rabbit size targets, with IR 200-yds max. With IR 250-yds for fox is achievable depending on light, weather conditions and terrain.