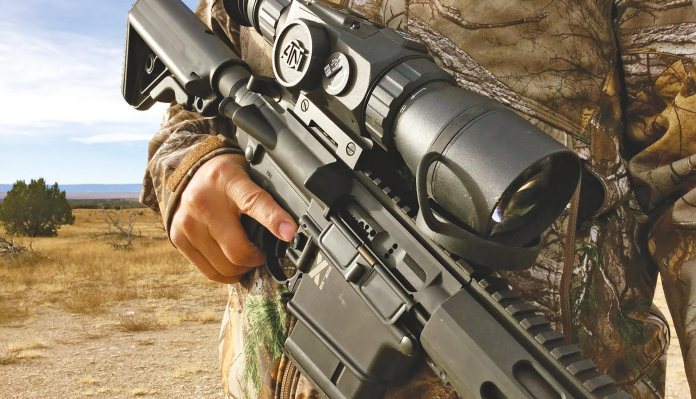 Last year at IWA I saw ATN’s new digital riflescope, the X-Sight. It looked clever, offering a single optic with both day and night capabilities; probably a solution to the problem that does exist in the world of night vision (NV).

I have been trialling the original 3-12x50 for a few months, but on test is the newer and improved 5-18x56, both are physically identical, with the exception of the larger objective lens bell on the 5-18. The build shows a body that houses all the controls; power and flash card and ATN’s Obsidian drive system. Both objective and eyepiece are focusable, as with all NV you need to get both the reticule and target in focus for all distances! Mounting is by a Weaver/ Picatinny clamp.

The X-Sight is packed with features, all of which are accessed by a press button keypad on top. ON/OFF (POWER) is at the front, behind are four keys (cursors) at 12, 3, 6 and 9 o’clock with the select button (ENTER) in the middle. These allow you to navigate the menus, select individual functions and adjust the lens power. It feels initially odd pressing a button to +/- the magnification!

Power comes from 4 x AA batteries, which are located on the right, forward of this is the micro SD card housing (card and adaptor not included). This is used for recording still photography, HD videos, and firmware updates. There are also Micro HDMI, Micro USB, Micro SD slots.

Initially you have to log into the ATN website to register, then download the firmware to your PC, then to the micro SD. This is then inserted into the slot and entered; this gives updates and bug fixes etc. Clever idea as upgrades etc are just a download away, ATN issue updates as and when! For example, on the original 3-12x50, the moving image reticule did not centre after zeroing, which caused problems when zoomed in on the target, as it was literally moved out of the way. The second update sorted this; I think I received three in all.

Operation is easy; with the firmware loaded, press POWER for 4-seconds and the ATN logo appears, and then changes to the reticule display. Now press ENTER twice and the main menue will show a number of quick access icons. Using the right cursor, move to MENU and press ENTER to get into the drop-down list of: EXIT, DISPLAY, CAPTURE, RECORD CONTENT, WIFI & GPS and SETUP.

There are a number of functions: Still Camera, HD video, Altitude Sensor, Image Stability/Gyroscope, GPS/Geotag which allows you to plot your route and even set way points, Wi-Fi, compass and velocity, which is about the speed you travel and not your bullets! SETUP allows you to set time and date and other functions, but DISPLAY is for shooting!

Press ENTER and you’re in. DAY/NIGHT mode is self explanatory and when you select you will hear a click, which is the ‘cut filter’ (day to night shutter) operating. Once done, press ENTER to set the option, which is the same with everything you do. Moving down to NIGHT MODE COLOUR you have the choice of white or green; I found white better, then LIGHT AMPLIFICATION with high, medium or low. Once set, press the left cursor (RETURN) to exit.

You are now back into DISPLAY, selecting BRIGHTNESS offers 5-levels. RETICULE DISPLAY allows you to switch it ON/OFF as required, then RETICULE TYPE, here you get three style and colour options. All are based on a medium Dual-X, with a floating centre dot or open centred cross too. The Dual-X is best but some form of Mil-Dot or ladder would be preferable, maybe on later updates? Colour choice is green, black or red. I found that green worked best in the day with red at night.

ZERO SETUP, offers a one-shot zero function, which relies on you being able to see the bullet hole in the target! So fire at your aim point and spot the fall of shot, keep the cross on the aim point and by using the cursors move the reticule to coincide with the bullet hole. As this happens a witness dot remains behind so allowing you to maintain the original aim point. Once the reticule is realigned press ENTER to select then RETURN. I would advise a check zero to confirm!

There is also a further menue called BALLISTIC COMPENSATION, which at the moment is experimental and allows you to put in velocity, wind speed/direction and distance. This is work in progress; as of yet none of the updates I have downloaded have done anything with it; we shall see! Space precludes me from going into detail on the other functions, as I consider the actual shooting menue priority. I have used the still camera and video, which are useful, but things like GPS, compass and velocity functions are of lesser importance to me!

I was not that impressed with the original 3-12x50 version and had poor performance. In the end I joined an independent, X-Sight, Face Book page. I think my example was an early model as the biggest issue initially was the limited objective focus of about 1/3-turn, which was not enough, as even at 25-yards in the day light I could not spot fall of shot. The 5-18x56 offers four full turns, and is more capable, as it is in other areas. Initially I was using Duracell batteries, which I thought to be the best. I discovered I needed to be using long life Lithium cells, since I switched the results were much improved. But to paraphrase a comment from night vision experts Scott Country who supplied the 5-18x56: ‘this model is a quantum leap forward’ and I have to agree!

From the box, the X-Sight comes with an IR illuminator, which locates to a Picatinny rail on the left of the body, the 5-18 has a tethered, rubber objective cover. Zeroing in daylight showed you could spot bullet holes at 100m; result! However, the difference between an all-glass lens system and digital is obvious, as the image is less crisp as the distance increases. This is exacerbated as you dial up the magnification too much, even more so at night! For day use I found a maximum of around x12 gave a good compromise at longer ranges, at night I did not push it past x8.

WHERE ARE MY NUMBERS?

Magnification shows in the screen (top right) as a cone, which, as you increase the power, decreases in width, so indicating the reduction of field of view. Visually, it also fills in to show the increase in magnification. The 3-12x50 also displayed the actual powers numbers too, which is useful. However, when I down-loaded the latest firmware for the 5-18x56 the numbers were no longer included! Why ATN did this I do not know, as it’s now guesswork as to what the exact mag setting is. As a right-hander, I found the front focus both stiff and partially obscured by the IR torch when normally using my left hand to adjust it. I would fit a small coaster lever to improve operation!

In daylight at around x12 ‘ish’ I could get out to 250-350 yards, though the reticule is a tad thick. For night testing, I set a series of yellow, reactive rubber targets out at 100, 150 and 200 yards. IR is mandatory and I could pick them out, though 200 was a little indistinct but you could see and recognise the target to shoot! Conditions were a bit misty, which probably did not help. On a clear night you could engage at 150-200 yards with reasonable ease. You can pick up eyes a lot further out but not the animal itself! I was using a 223 with a moddy on and when shooting you get a 1-2 second ‘white out’ as the gas and smoke refracts the IR, which obscures the target. Again, this might have been exacerbated by the misty conditions!

Run time is good, with the Lithium cells giving 4-6 hours continuous (Wi-Fi OFF). Regardless of the magnification you have set, when the sight is turned OFF then ON it returns to x5. Pleasingly it did not lose zero either when zooming or being turned ON & OFF, which was comforting! A word on switching off, when you press and hold POWER, you get a screen message with a 3-second count down to deactivation. As soon as the screen goes blank let go of the button, if not it will turn on again, and flatten the batteries if you are not aware!

You need to know your way around the key pad too, as it’s easier to adjust in the aim, at first I found I was pressing the wrong buttons but now I am familiar with them! At 2.7 lbs, the X-sight is not light; however at 11” long (less eye cup) it’s not that big or cumbersome either.

I do not think any digital NV scope is as effective as proper ‘tubed’ NV, but it still has a lot of potential and more importantly is highly costs effective. Let’s face it, engagement ranges are vastly reduced at night with, in my opinion, 200 yards being a long shot. Personally I would not shell out £2000+ for a proper night sight, but at £779 the X-Sight 5-18x56 is a great bit of kit for the money, plus solves the problem of dedicated day and night optics too and is easily affordable by comparison!