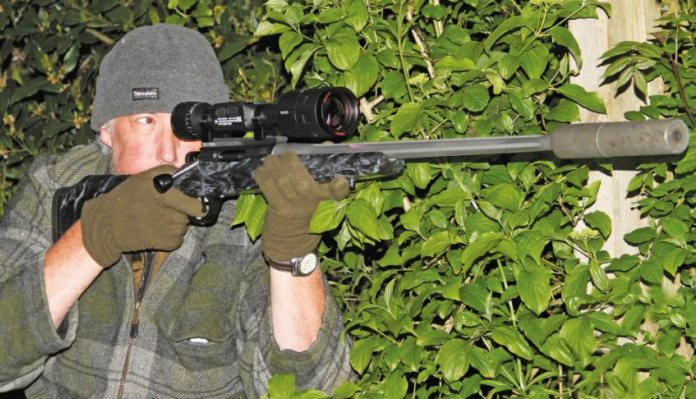 This will be the first time I have tested an ATN thermal device; I have had a look at several of their night sights before, but with the ever-increasing popularity of thermal let’s see what’s on offer.

The Mars 4 Smart HD Thermal imaging sight is now distributed by Highland Outdoors Ltd. with the latest versions and all new software updates applied. Hugely popular in the States, the sport of hog shooting has really lead to the increase demand for thermal imaging devices and weapons sights.

Outwardly, the Mars 4 looks very similar to their, digital day/night X Sight with its proportions only being a tad longer. The overall format is that of a traditional rifle scope, i.e. 30mm body mounting tube with a de-horned turret profile, as all adjustments are made digitally via a menu.

It has an HD display and impressive 4.5 to 18x power zoom with the usual myriad of options, such as reticle choice and colour, quick zero, compass and inclinometer, various heat detection settings and video picture storage to name a few. In fact, you get a quick guide and more comprehensive handbook, that talks even this odd duffer through the various set ups easily. I’m very much aware that all these features are aimed at younger and far more tech-savvy shooters than the likes of me, but I cope.

At 16x3x3” long and weighing in at 2.2lbs, it’s quite a chunky piece of kit made from thick aluminium shell covered or anodised with a satin black coating. It has a 46mm objective lens arrangement, set back into the body with a threaded lip for sunshade fitment. On the objective ring is the focus collar that is smooth but be aware, a small amount of movement adjusts a big focus. Behind this, is the first 30mm body mounting area at only 1.75” with the rear spacing of 1.25”. You are OK on a Picatinny or Weaver rail scope mounting system but may find the reach forward or backward mounts necessary for long action rifle designs and conventional rings.

Mid centre, where a traditional turret adjustment system would sit, is the rectangular control hub of the ATN. On top are five, clearly marked red options. Top is power, one click to turn it ON and a long hold to turn it OFF with additional presses of the central buttons. These three central ones are multi-functional and are OK, left (pic) or right (play) to navigate through the menu system. At the rear, is the rangefinder control button, that is pressed once to bring up the ranging arrow and then again and the arrow will move under the target. A final push to range it. It’s a stadiametric system that uses bracketing to determine the distance, and a little slow to employ compared to an LRF monocular.

To the left of the hub, where a parallax or illumination system would sit, is a large wheel that adjusts the zoom from 4.5 to 18 x power digitally that is displayed on the screen. To the right side, is the USB port for charging and micro SD card port, complete with flip-off rubber cover. Interestingly, the Mars 4 is not fully waterproof, only water resistant, as stated in the literature. Finally, there’s a fast focus eyepiece to allow clear definition of the display. You also get a long rubber shield to eliminate extraneous light in day use and concentrates the image at night. There are stickers on each area stating its purpose, obviously for the American market, or dummies like me!

Right, lets zero in and use. Firstly, you need to charge the battery. Its internal and is charged via the USB cable. Six hours gives you a very generous 15 -16 hours of continuous run time, dependent on use and climatic conditions. In use, all night is long enough. Personally, I prefer a separate battery system, as OFF is OFF and a dodgy battery is easily exchanged.

However, the display is turned on in 11 seconds; a bit slow perhaps, but once up, you have all the information set out in front of you. There is an auto shut off too, so no problems if it’s left on and in fact just leave it on all night anyway.

Battery charger, blue tooth Wi-Fi connectivity and magnification is displayed. The image is good with a flat edge to edge clarity, but you need to turn those annoying gradient and compass settings off, as you don’t need them. You need to also adjust the contrast and brightness to suit your needs, to avoid bleach out, but clarity was picking up rabbits out to 250 yards and foxes to 400 yards. Not too bad then?

Set up is by pressing the central red OK button. Now, the menu is displayed with a ribbon type option list in front of you that can be accessed by the left and right hand buttons. These include system set up with options of thermal, photo/video, display, profiles and zero options as well as settings. Next option is contrast, then zeroing the reticle, then ballistic calculator, recoil activated video, Wi-Fi, gallery and environment distant entry and range finder.

In fact, each of these have subgroups and are too numerous to mention, so here are the main ones. Reticle choice is a personal thing and I opted for the open 4a-type without top bar and a floating central dot. I also opted for a yellow reticle and BLACK HOT detection. Of course, you could choose a Mil-Dot pattern in red with WHITE HOT or rainbow. The choice is there, so up to you and it allows the differing terrain and backgrounds to be better encountered and make the reticle more visible, so a good thing for shot placement.

Zeroing is actually easy, with a clear use of all the four buttons on the top of the central hub to move the reticle. So, fire a shot and see the bullet hole on target and move the reticle to coincide via the X and Y axis display indicators. You can set up for differing ranges and rifle and calibre profiles too, so good for many differing scenarios. The range finder was handy, and you can input standard sized game into it, or I used the manual mode for rabbits or fox heights, which was surprisingly accurate.

I fitted the Mars 4 to a Sako 22 Long Rifle and, despite its weight, it balanced well and I was soon zeroed in with Winchester 42-grain Max, sub-sonic ammo. If you ignore all the options and just concentrate on the image from the ATN Obsidian IV Dual core T, you will be pleased. You need to adjust like all thermals to the correct calibration and contrast brightness settings for the terrain you are shooting in, otherwise I had quite a few bleached out areas. Definition was clearest on BLACK HOT i.e. more detail to the targeted object, but still with good visibility and clarity to the surrounding trees, bushes fields etc.

The zoom feature is really handy and steps up, but all is good until about 10-12 mag and then the image becomes more pixelated. In use or practice, that is more than enough magnification anyway, clarity at lower mag wins out for me, just stalk closer!

Battery life was not an issue, so leave the Mars 4 ON, otherwise that fox that just pops out will pop back in again in the 11 seconds the ATN takes to fully switch back on. The reticle choice is very good, as are the colour options, although a separate button for white and black, the most commonly used would be more useful to me.

I prefer a manual zeroing procedure, but with these new digital NV and thermal kit it’s all menu in menu and I have to say the Mars 4 was easy to set up and reliable. There was a ballistic calculator to input your cartridge data and weather conditions and so a point of aim was determined and other options, but time would not allow full exploration; next time.

I also fitted it to an RPA 6mm BR rifle and, when zeroed in the day at 100 yards, could clang the steel fox target at 250 yards no problems. Detection was much greater than that, but why shoot further, better safe than sorry, especially with a thermal? I took the Mars 4 out foxing on numerous nights but only saw livestock, rabbits and Roe deer; typical!

I’m left feeling a bit Marmite to be honest. Take away the unwanted features i.e. turning them off is no problem, but the internal battery and short mounting area on the body tube could be. Also, it should be fully waterproof too. But a clear image after adjustments and easy to navigate and zero in and actually the zoom was pretty good to. It comes with eye shield, charging cables, standard and reach forward rings, scope cover and lens tissue.