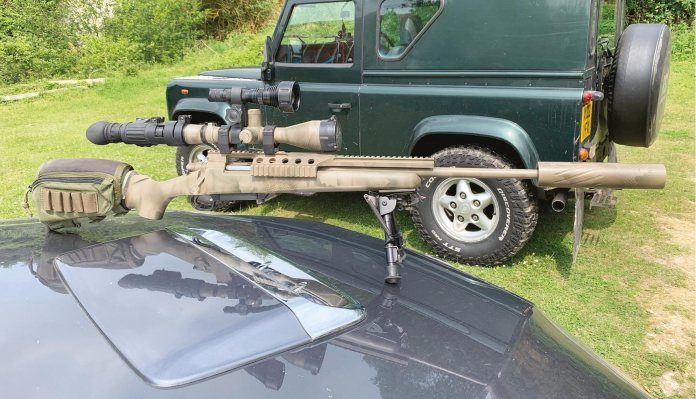 The world of night vision devices moves on at an impressive pace. There are now traditional tubed and more modern digital and thermal devices to suit most budgets. As a professional user and similar users I am in touch with are of the same opinion, I can not help but wonder if many of the manufacturers have lost sight of what is really wanted.

It just has to work!

Those of us who make our living protecting wildlife, gamebirds and various crop types, do not, on the whole, really care if there are 25 different reticules to choose from, Wi-Fi or Bluetooth connections, still or filming capabilities, GPS enabled markers etc. What we want and need is something that is simple to use, offers a high quality of image and if it is a stand-alone scope rather than an add on easy to zero. The military have a saying; ‘keep it simple stupid’, which is no doubt why they use tubed devices, as do nearly every pest controller and gamekeeper I know.

Some also have thermal sights. I do, which was purchased with the intention of using it as a spotter for most occasions and to put on a .22 rimfire for rat work. This has never yet happened and I have lost count of the number of times the instruction manual has been thrown across the range hut, followed by a long line of expletives, when attempting to zero; only to get somewhere near but between reading the book, manoeuvring through menus and everything else the sight has gone back to the starting point, as I’ve never got to the point where all the selections have been saved in the time allowed, argh!

There is no doubt that, whatever format you use, you will only get what you pay for! The less expensive are more than capable of rabbit and rat work to normal distances of say up to 100 meters or slightly further. Costlier units will allow you to clearly identify, with a good IR source, optimal air and background conditions, quarry at distances probably too far to shoot at. The PVS-14 from General Starlight CO. Inc. of Canada imported by Nightmaster definitely fits into the second bracket.

Last year, just after harvest had started in very early July, I was fortunate enough to get my hands on one for testing and managed to keep hold of it well into the winter when I took the plunge and purchased it. The PVS-14 is a rear-mounted add on, with a Cobra DSA Titan mounting system, also supplied by Night master. The model I have has a 2+ generation Photonus tube, that is from the western world not one made in the eastern bloc; it is not auto gated, so be even more aware of exposure to unintended light, the resolution is 65Ip/ mm, SNR is 23.35 and FOM is 1517.75. Please don’t for a minute think I have suddenly gone all boffin on you, these figures come with the instruction book and are relevant to the actual image intensifier you have purchased.

In all honesty, I do not have a firm enough grasp of physics and science behind night vision to know what these figures mean. But I do know if something works well or not, which is all that really interests me. The unit with mount weighs in at 1lb and, when fitted to the rear of my scope, adds an additional six inches. This does mean that the day scope has to be set further forward than one would normally have it, but with the Leopold I am using this is not so far as to make it difficult to use during daylight hours with out the PVS fitted. The instruction book is idiot-proof; even I can understand it with no problems or swearing and is full of very clear colour photographs. A single CR123 battery provides the power and after probably well over 150 hours use I am still on the original. This may not sound a particularly long time, but I only have the PVS turned on when the fox has been spotted and am getting ready to shoot.

The PVS has an integral IR illuminator, but this is really only any good for very closeup work, so a good quality IR projector is a must to achieve best results. I normally run a Nightmaster XSearcher with the battery extension tube as my IR source, but as part of the testing of the PVS they supplied me with the new Eclipse 800, running off a single battery. To be honest, the Eclipse is every bit as good as the XSearcher, with the advantage of being less heavy weighing in at 11oz as opposed to 1lb1oz. After seeing Bruce Potts’ review of the Nightmaster Trident recently, I am also intrigued to see how that performs with the PVS.

There is a focus ring on the objective lens, which can also be adjusted with the PVS fitted to the day sight. I found there is very little adjustment needed when everything is set up with this focus ring. The real adjustment is done with a combination of magnification setting and parallax on the day sight. I have tried the PVS-14 on Nightforce NXS and SHV, Vortex Razor and Viper scopes and found them to all work just as well as the Leupolds that are on my .223 and .243 Ackley Improved, the main thing is to have the ability to parallax the scope. Although not inexpensive, but competitively priced, one other huge plus is that there is a seven-year manufacturer’s warranty providing you have not done anything silly. It is almost like turning the clock back, to a time where manufacturers actually stood by their products and made them to last.

I’ve been using it for 11 months and it is fair to say it has had a wide range of backgrounds, weather types and differing air qualities to contend with. Initially, as harvest was in full swing and through the autumn, the majority of foxes I shot were on stubble fields, with the light backgrounds and good air quality clearly seeing them well beyond 400 meters was easy. Even when looking at hares at 400 meters, you could see clearly enough to decide to take head shots if wanted. As we all know air quality, as in how dusty or dense or damp it is, makes a huge difference. The particles in the air giving bounce back of the infra-red light and this was no different with the PVS, as with any other night vision device I have used.

On one night, the moon was up and calling in an area I knew cubs to be in I shot the two seen with no IR needed at all, one at 187 meters and the other at 225 meters. Reason; there was plenty of natural light and a lovely light barley stubble to help things along. When autumn comes along, stubbles are being pulled up ready for drilling winter crops and the brown background gives a very poor contrast between the fox and soil. This does make it difficult to clearly identify foxes at even relatively close distances, but with this set up, several were shot because I could clearly identify them, that in the past with my old kit I would have had to left alone if they had not been called in a little closer. To some, this may make no difference!

However, when running a commercial game shoot or protecting livestock and poultry, getting these more awkward foxes when the first chance presents itself is vitally important. Throughout the winter, when there is vastly improved contrast, as by now the majority of fields are green with the crops growing on, several more paid the price for just stopping that little too long.

The features I like most about this rear-mounted unit are; there is no need to re-zero the day scope when the NV is taken off or put on. The scope does not need to be set so far forward that it becomes almost unusable during daylight, combine this with the competitive price and the long warranty what more could you want? Yes, £3250 is not cheap, but it does allow you to use your selected night rifle and day scope of choice, for double duty, day and night work by the simple addition or removal of the add-on. At present, the PVS-14 is fulfilling all my requirements and will no doubt continue to do so for quite some time to come. To sum up, if you are looking for quality night vision in terms of build, ease of use and clear image whilst also having the flexibility of being able to use a conventional scope in daylight with no need to re-zero or making too much of a compromise with head position, then this is the one for you.