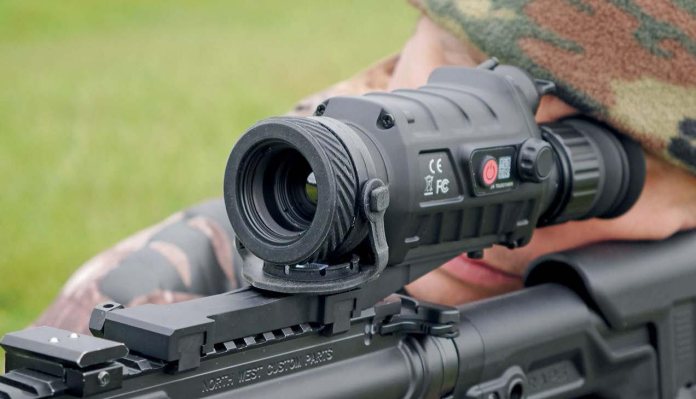 The value of thermal devices for spotting potential quarry is now well established, with a good selection of monoculars available for under £1K. For thermal riflescopes, however, it’s a different story, since the need to ensure that what you see in the display precisely matches the real world into which you are about to shoot demands a significantly higher specification. Effectively, this places the bar for ‘affordability’ twice as high, and even then, achieving a £2K price tag whilst maintaining the image definition and adjustment precision that are essential for anything more than short-range work is a major challenge. The new Guide TS425 from Thomas Jacks is the latest unit to pick up the gauntlet. Is it good enough?

Nothing plays as great a part in the cost of producing a thermal device as the quantity of germanium glass consumed in making its lens. This is why the TS425 can be priced under £2K when its stablemates, the TS435 and TS450, which differ only in lens size, cost an additional £260 and £640, respectively. Lens size is also pivotal in performance terms, because, along with pixel size, it determines the resolution of the device, expressed as the size of the square each pixel ‘sees’ at 100m and known as the ‘instantaneous field of view’ (IFOV). By this measure, the TS450’s lens gives it twice the resolution of the TS425’s (34mm vs. 68mm), and sure enough, the smaller scope does struggle to render detail.

On the plus side, Guide’s TS4 series scopes are equipped with high-definition 1024x768 displays, which increases the precision with which the scope can map the reticle onto the target image, thereby reducing the value of each ‘click’of adjustment within the zeroing function to a relatively-fine 2cm (0.2 MRADs) @ 100m and increasing the likelihood of zeroing the scope to the correct pixel.

The cost of the TS425 is also kept down by omitting the built-in memory and recording function commonly found in today’s thermal units. Instead, the Guide simply has a video-out port for a LEMO connector. Although this may be a good technical solution (LEMO connectors are rugged and lock firmly into place), this format lacks the familiarity of USB and is incompatible with smartphones, so in order to record from the Guide, you would need to acquire something like Yukon’s MPR Mobile Player/Recorder (£192.95). The lack of a WiFi or Bluetooth transceiver also means you can’t view the target image or control the scope’s functions remotely. Of course, none of the above may matter to you – not least because it has no bearing on the key issues of target acquisition and engagement - in which case, it’s all money saved!

So that’s what we’ve given up to get under the £2K bar, but everything else the TS4 series has to offer is still there. In physical terms, this includes a rugged aluminium alloy housing, a cantilever mount with a low profile and plenty of reach, a hard/ foam-lined transit case, a battery charger and a LEMO/coaxial cable. Ergonomically, there’s a bellows-type eye cup, a grippy ring to focus the objective lens, a securely-tethered lens cover that can be neatly stowed under the objective lens, an easy-grip cap to the battery compartment, modest weight and compact dimensions as well as a delightfully simple-to-use 2-button control system.

Also to like is the power supply, since, in place of the proprietary and expensive battery packs favoured by Pulsar, or the built-in rechargeables typical of other Chinese models, Guide use generic 18650 rechargeable cells. A single 2200mAh cell is supplied, but the charger holds two and additional cells with as much as 3500mAh are widely available for under £20. Better still, it doesn’t matter which way round you drop the battery into the compartment, which, coupled with the tactile battery cover, makes it easy to swap out a spent cell. You do need to power down the sight first, however, and the lack of a USB port means you can’t charge the cell in situ. Additionally, power can be eked out by using the standby function (via the power button) and by selecting an auto-shutdown option from the advanced system menu.

This brings us to the control buttons. There are just two of these: a low-profile power button and a higher-profile zoom/ menu knob. A quick press of the former activates the scope. The screen comes to life within a couple of seconds, but it takes a further 20 seconds until the sensor has calibrated itself and the scope is ready for use. Thereafter, a quick press will recalibrate the sensor; a longer press will take you to standby mode and an even longer press will take you through a time-out animation to full shutdown. From standby, reactivation is almost instantaneous with a quick touch of the button. In use, I found the power button was prone to accidental activation, so I learned to remove the battery before sliding the rifle into its case.

The first function of the second button is as a zoom dial, taking you from the scope’s native 1.6x to its 3.2x and 6.4x digital zoom settings. I like that it will turn in both directions, so you don’t have to go all the way to 6.4x to get back to 1.6x. However, you do only get those three steps, with nothing in between. The scope gives you a choice of 10 reticle designs, all of which are ‘scalable’, like a first-focalplane reticle.

The dial also provides the means to enter (press), scroll through (turn) and select from (press again) the menu. A single menu screen is presented, with items arranged in a convenient order and three sub-menus (settings, advanced, zeroing) at the bottom. All the usual parameters are there.

Notable is the ability to create up to six zeroing profiles, each with its own reticle pattern, colour and distance (25/50/100m). The limited choice of zeroing distances seems restrictive at first, but the simplicity is welcome in practice. Absent a ‘one-shot zero’function, zeroing is best achieved by fixing the rifle in a rest. As you scroll through the windage and elevation values, you’ll see the reticle move across the screen. So the drill is: 1. bore-sight; 2. Shoot; 3. Identify the point of impact; 4. Scroll the reticle centre onto the POI; 6. Save the settings. Saving refreshes the screen, re-centring the reticle. With the rifle in the rest, it’s a good time to scroll across a measured distance on the target so as to calibrate the ‘click’ values. For me, 20 ‘clicks’ equalled 10cm at 25m, giving a value of 0.2 MRADs/click. Finally, shoot a group from your favourite field position to confirm the zero, and tweak the settings as necessary.

The selection of colour palettes is interesting. As well as the usual ‘hot- black’and ‘hot-white’, there is a green palette that evokes classic tubed night-vision, and three ‘hot red’ palettes, each of which has a different threshold at which the hottest parts of a ‘hot white’ image are accentuated in red. Adjusting the brightness lowers the threshold in each case, increasing the amount of red. Interestingly, the ‘hot-black’ palette is at its darkest with the brightness (i.e. blackness) turned right up!

I really liked the form and function of the TS425 and found it easy to zero, but I must confess I struggled to hunt with it due to the lack of sharpness and detail in the image. It picked up heat sources well, and by observing their relative size, behaviours and locations most creatures could be identified with sufficient confidence to validate a shot well before they came into range. My issue was the way in which the blockiness/blobbiness of the image constantly reminded me how much ‘rounding up’ that little 25m lens was obliging every pixel in the sensor to do. This was reflected in 100m groups that were 3-4 times bigger than the same rifle could produce with a day scope and NV add-on. Granted, with a good varmint rifle, and the permissiveness of a high-velocity fragmenting bullet, that could still be minute-of-fox. Even so, the TS425 isn’t a scope you can just throw on and hunt with, you need to take the time to find its real-world limits on paper and steel first and then work within them.

There is a lot to like about Guide’s TS425, and with practice, and a solidly ethical approach, it could undoubtedly produce results. Nevertheless, the small lens that keeps the price down hamstrings its performance to the extent that paying extra for one of its larger siblings looks like a wise decision. Tellingly, in the US, Burris has rebadged the larger models as the BTS 35 and BTS 50 but isn’t offering a BTS 25. Bottom line: there will be a truly capable £2K thermal scope one day soon, but it’s not here yet.