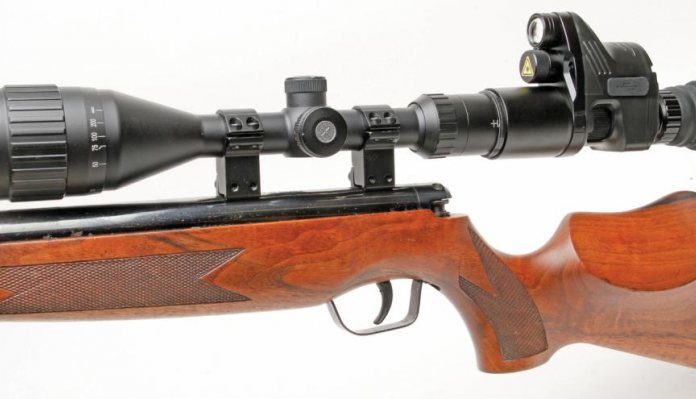 I would like to appologise to readers for misinformation in the Night Vison (NV) test on the PARD 007 rear add-on and laser safety articles from the April 2020 issue. Both concern the comments on the PARD digital sights as to the status of their lasers. I commissioned the articles and admit to knowing very little about the technicalities of Night Vision and after printing it in good faith, it was pointed out to me by a trusted source, that the PARD’s laser units are classed as hazardous in the UK, being category 3B and 4. It was also said that that Pulsar, Yukon, ATN and Sightmark “benefit greatly from the use of VCSEL lasers.” However, research showed that none of these manufacturers actually use them in their builds. So, a fi ne line between benefiting as an aftermarket addition, compared to being included in the package.

This classification is defined by British Standards BS EN 60825, that puts all lasers depending on their wavelength and power output into classes, 1, 2, 3 and 4 with subclasses in between. Based on this, PHA (Public Health England) issued a guidance to the Government on how to regulate the use of these devices. The current standing is that lasers of 3b and above cannot be supplied to consumers, as they considered to be dangerous. All PARD units are Class 3B and 4. I have para phrased the classes below.

Classes from 1 to 3R are permissible to be used in commercial products, subject to meeting certain criteria set by the Standard. However, class 3B and 4 are not, details are as follow:

The upshot being devices intended for use by consumers should not be of Class 3B or Class 4 status. Trading Standards Authorities may use their existing powers under the General Product Safety Regulations 20054 to remove laser products intended for consumers of Class 3B and Class 4 (as defi ned in the British Standard) from the general market.

I have also seen information on tests done on the laser emitters on the PARD units by certified UK testing laboratories regarding the statement in the safety article saying: “The laser IR emitters in the PARD NV units meet all the clause 4.4 requirements and therefore their emissions may, at the manufacturers or sellers choice, be classified under the conventional lighting standard.” Both concluded the power output, cannot be classified as ‘conventional lightning’ and must be treated as a laser emission. So, I appologise to the readership and other manufacturers if these two articles were misleading in some areas.

So, there is but one course to follow; British Standards BS EN 60825, which are if nothing else Government-approved so to speak. To put it in layman’s terms, yes the PARDs are attractive at the price and from what I can make out quite good at what they do. Installing lasers as a source of illumination into NV gear is very tempting, which leads to cheaper, lighter and smaller devices. However, most manufacturers don’t go this way, as it’s not safe for end users, as well as exposing those who import and sell them to possible legal actions. Ironically, there is no legal standing on private possession of those lasers, there is only a potential health risk to the user.

Also, in the worst case scenario, if accidents happen, it might bring government regulation to the NV industry, which we don’t want, as we have seen enough persecution of the shooting sector to imagine the ramifications. For the future, I will defi nitely be doing my homework in these areas, so I can keep a more informed eye on what I put in the magazine!