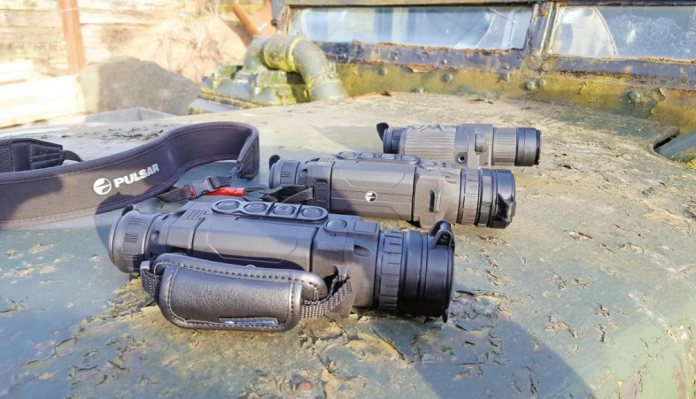 I have been using and testing Pulsar night vision and thermal imaging equipment for a couple of years now, and to be fair, you get a lot of bang for your buck. I’ve tested devices from various companies, which fall into the same categories, but found either the quality isn’t there, or they are too expensive. When you look at the Pulsar Apex XD75 thermal weapon scope for example, you will see what I mean – no competitor product available in the UK can touch it for quality, clarity and value for money. It’s an amazing achievement and is an upgrade of the original XD50, which was good, to the XD75, which is second to none.

A few months ago, Pulsar announced that they were going to be releasing an array of new night vision and thermal imaging products. These were launched at the Shot Show in January and at the IWA in March, where I first saw them. Pulsar has released eight products – some brand new, some upgrades to existing models and many with multiple variations.

The first of the new designs to hit the UK market is the Helion, which is a handheld thermal imaging monocular. There are seven variations: XQ19F, XP28, XQ30F, XQ38F, XP38, XQ50F and XP50, which tops the range. Pulsar has designed Helion thermal imaging spotters for various applications, including night hunting, security, trail orienteering, rescue operations, etc.

Pulsar supplier, Night Master, kindly sent the Helion XQ38F and XP50, and I put them straight to the test. I always think it’s more beneficial testing equipment over longer periods, as it takes time to get to know it and put it through its paces during every season. Hunting equipment, especially thermal imaging, performs differently depending on weather conditions and temperature changes.

If you look back over my foxing articles for the past year in this magazine, you will see that I ran a long-term test on the Pulsar Apex XD75 thermal weapon scope. It takes time and dedication to complete tests like this, but it’s worth it in the end! When I look back over my notes and see the information I’ve gathered, which has helped to inform you guys, I’m proud of a job well done!

I started off with unboxing the XQ38F, which is the cheaper of the two. It comes in a similar black and blue printed box as the earlier Quantum models. Accessories include a black nylon carry case, neck strap, high capacity battery pack, charger, charging lead and user manual. The design is completely different to that of the earlier Pulsar Quantum. At first it seems a bit more complicated to operate basic functions, such as the brightness and contrast. But it has what Pulsar calls ‘hot keys’, which are a set of in-line buttons on top of the unit, which control all basic functions. The main square button in the middle of the row is the menu and the two either side act as the up and down cursors for navigating functions.

There are a few new features on all Helions. The first is the Stream Vision function; this is an app-based feature, which allows you to connect to your mobile phone or tablet. Apps are available for Android and iOS devices via the Google Play store and Apple’s App Store. Once connected, it gives you a wireless WiFi video feed from the thermal spotter, so you can see what your Helion is looking at. You can also adjust your settings and view options from your mobile device.

What this basically means, is that you can attach your spotter to your vehicle’s roof lamp and view the video image in real time through your mobile device from inside your motor. And the best bit is; no cables, as it’s wireless! There’s an option to invite a guest to connect their device, so that they can see what’s going on too, which is a great idea if you are not feeding the information back to your own device. To connect your chosen device, you need to activate the wireless function on both devices, create a password and enter a selection of five numbers. Then the two devices will connect. It’s easy to set up and all the information is set-out in the instruction manual.

Another great function, which I really like and find very useful, is the built-in recording feature, which can switch between video and image capture at the touch of a button. This is also compatible with iOS and Androidbased mobile devices. It allows you to watch and record video and stills to both the Helion and your mobile device. You can also directly stream live video and upload recordings to your own YouTube channel.

There is a ‘PIP’ feature (picture-in-picture) which allows you to see a zoomed image simultaneously with the native image in the eyepiece (the same as on the Apex XD75). The Helion can be operated by a remote control, which would be very handy if you plan on roof mounting it, so you can operate it from inside your vehicle. This is available separately from Night Master.

Their older thermal spotter, the Quantum XQ38, was priced at £2,620 whereas the new XQ38F is around £2,050. As you can see, there are a lot of new features on the Helion that weren’t on the Quantum, and Pulsar has dropped the price considerably, making it a very good entry-level product. As you would expect, the XP50 is substantially better. Physically, it’s identical to the XQ38F; as to outer casing, buttons, features and functions.

However, it benefits from a bigger objective lens, better sensor and higher resolution screen. All this boosts performance, clarity and provides a very usable field-of-view. I would definitely be tempted to spend the extra on the XP50, as it seems to be twice the spotter the XQ38F is! However, if you’ve never used a thermal imaging spotter, the XQ38F is great value for money, as it has all the same functions, such as the recordable video streaming and Wi-Fi connectivity, as the XP50.

These two features alone have revolutionised the thermal spotter and the way we hunt. Now, the person driving the vehicle or sitting next to you on the high seat, can join in on the viewing of the spotter. Before this technology, it was definitely not a spectator sport. The record function should prove itself very useful in more ways than one, as you can record events during your nights foxing and present the evidence to the land owner, in order to prove your worth and dedication to the cause. Another good point on the recording side is that you cannot only see potential undesirables who might be up to no good on your farm and estates, you can now record them and present the evidence to the correct authorities. This could possibly help to cut down on the problems with the dreaded poachers with their dogs and give the deer and hares the respect they’re due.