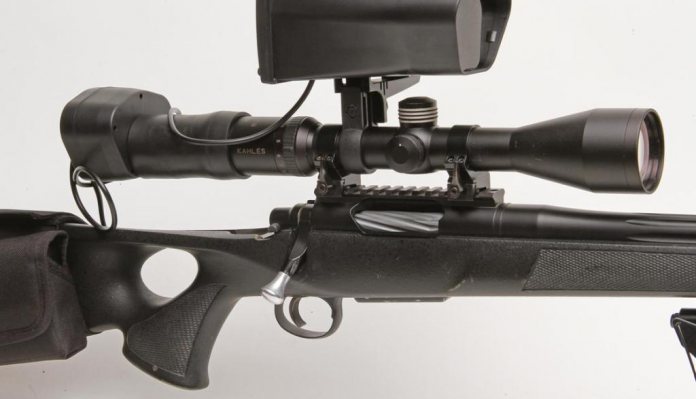 There is nothing really quite like a Nite Site night vision (NV) sight, it’s been copied but they were the first to offer the shooter a competitively priced NV system that attached directly you your day scope that used a miniature TV-type screen, camera and IR illuminator for an effective vermin control unit.

Nite-Site saw an opening and niche in the market and a novel design, developed in the UK, was born, which has proved massively popular since its introduction. Originally, the target audience were air gunners but soon rimfire users were bagging bunnies and then the centrefire fox control crowd took note, as the system was quick and easy to use and allowed day or night use.

With increased interest, both here and abroad, Nite Site have now updated their entire range, to offer units of differing specifications to suit various requirements and pockets, with the Viper, Wolf, and Eagle models. However, common to all, is that they require no zero change to your scope, do not need ambient light, due to on board LED illumination, uses a 940nm IR beam along with video and audio output and is powered by a rechargeable battery pack. And, with the newer Elite option, comes a really useful and effective laser range finder.

The system consists of two major units; first, the IR projector that clamps above the scope, forward of the saddle, integral to this at the rear is the viewing screen. A camera unit fits to the eyepiece bell that sends its signal to the screen and power comes from a stock-mounted battery pack that gives 5-hours use. All this comes as a boxed kit including adaptors, charger etc. The operation goes like this; the beam of IR light allows you to see at night, as the image comes in through the scope then into the camera, which sends it to the screen, where is shows as a digital image.

You see what the scope sees plus the reticle, which you aim with in a head-up stance, which is mandatory, as you can’t get you head to the scope for obvious reasons. That screen is 3.5”, so plenty big enough for a good image and aiming situation. You also have a small wheel low/right of the screen to change the brightness of the TV output. This is handy to get a better contrast and also lessen the likely hood of illuminating your face out in the field. There is an anti-glare covering that can be removed that acts as a protective cover against scratches, I left it on and it actually enhanced the contrast and reduced glare. Equally good for rats in barns, as it is for foxes at longer ranges, the Nite Site family now offers the option of what they call Dark Ops in Eagle, Wolf and Viper options.

The Dark Ops Eagle Elite is the high spec unit that gives sharp, defined images and uses the new 940nm infrared that is invisible to humans and animals for total stealth use. Older models had the 850nm illuminators that gave off a faint red glow, that may or may not spook your game. Being the Eagle version, you have five IR illuminators within the projector casing, giving that all-important extra range and clarity.

This only illuminates the area you are aiming at and thus gives a super clear image and range of 550 yards max. There is a large thumbwheel on top of the IR unit, which varies the power output, so you can accurately place or cover only the area that needs detection. It also allows you to reduce the IR output in barns after rats etc. to stop over illumination and bleaching the image out. Between this and all the other controls you can fine tune the Eagle to suit your shooting ground and terrain and also the ranges and species that you are likely to hunt.

You have a rotating focus wheel now on the Nite Site models, which makes focussing the image with your reticle so much easier than the old method of taking the camera section off. Much quicker and you can really get a good sharp image at any range you are shooting. It is sited on the top left quarter of the module and has a grooved edge for easy focusing.

YouTubers will appreciate the micro SD card slot (card and adaptor included) so that you can record images and video. Just press the button on the back of the camera that glows red and you are recording, simple. Most interesting and practical is that the Eagle Elite also has the laser range finder attachment, which solves the age-old problem of accurately estimating distance at night. This is direct and horizontal distance, so an accurate reading at any angle, very good for barn use. As it corrects for the differences of angles shots and you are given a precise range, so you can change your pellet or bullets trajectory on own day sight or use of stadia on the reticle. It is powered separately by a CR type flat battery housed on top of the unit.

The laser is blind, as you cannot see through it, but the beam can be seen in the screen and positioned on to the target you are viewing for an accurate range and a press of the left-hand button brings up an LED read out.

The battery is available in several sizes or ampere (Ah); I had the larger 6Ah, which will last all night and is Lithium-based, so just charge before you go and don’t worry about it. It is conveniently held secure in a Cordura type pouch that is mounted to the rifle’s stock and attached by a wrap over Velcro flap. This can be adjusted to give some height increase, to aim in viewing the TV screen output. Wires come from this pouch directly to the camera unit attached to your day scope. These can be tucked through the wrap-over flap and manoeuvred so that they are not too much in the way.

Nite Sites always have that unusual heads-up sighting system that at first does not come naturally at all to me. But, after a while and familiarisation of the Eagle, it’s no bother at all. Your head is off the rifle’s stock with this system, so some extra padding under the battery holding flap can help or an additional cheekpiece.

It’s not really a problem unless the rifle recoils a lot and it seems to move backward quite a bit. I always shoot with both eyes open and so does look a bit cross eyed. Because the camera unit fits to the back of the day scope, your shooting position is farther back but you can add a shotgun-type ‘over the stock’ extension to make it more practical if you wish.

The TV screen is large at 3.5 inches and gives a decent, sharp image and definition with a crisp black and white colour range. My only real niggle is the way the illuminator attaches to the day scope via the polymer clamp, as when you rest the rifle or sling over the shoulder it feels a bit flimsy to me.

The Eagle Dark Ops Elite is the top end version and as such offers a longer range. To me that really means you can shoot at sensible distances but see beyond the quarry to see it is safe to shoot, invaluable! It also means that the image is very clear and so you can confidently take a precise shot using your day sight’s reticle, but remember too much magnification will pixelate the image. On a rimfire or airgun, you can use this Nite Site system to hold the rifle away from the shoulder and, so long as the parallax is OK, still take a shot at a rat without moving your position.

Other than the unusual method of shooting, i.e. heads-up that you soon get used to and the illuminate clamp system, the success of the Nite Site system is mirrored in excellent sales. The Eagle Dark Ops is the natural progression of the series and I would definitely buy the Elite option which includes that superb laser range finder system. It all comes in a custom-made case, with everything you need including car charger, normal charger, 4GB SD card, quick stat guide and 24-month guarantee card for sight and 12 months for battery. It gives a very good range, image quality and also is very convenient, as you can just remove and use your day sight as normal and remount when it gets dark.