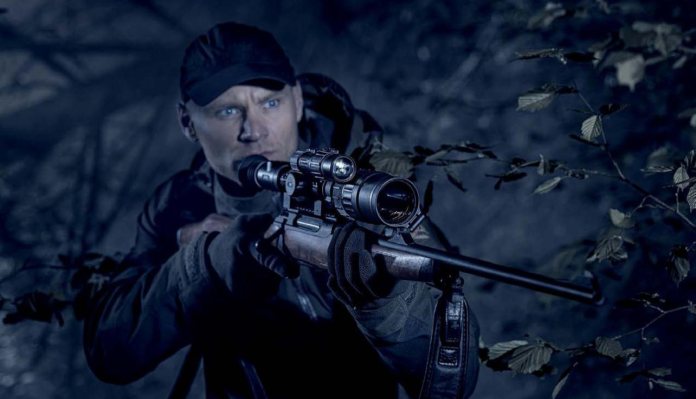 There’s an obvious appeal to having a hunting rig you can use around the clock. Usually, this means supplementing a day scope with a rear or front-mounted add-on, using either digital night-vision or thermal-imaging technology. Such units work well, but there’s always a feeling that the flexibility they offer comes with a cost in terms of consistency and capability. This feeling has given rise to fully-integrated digital riflescopes promising capable colour imaging for daylight use, and solid IR performance at night.

Despite its history as a trailblazer in the digital NV world, Pulsar has been something of a wallflower in the emergent day-night sector, standing by as ATN (X-Sight), Sightmark (Wraith) and Pard (NV008) have contested that arena. The arrival of Pulsar’s new Digex C50 changes that. The question is, does it have what it takes to put its contenders in the shade?

At the time of writing, ATN, Sightmark and Pard’s flagship models can be had for around £825-£900, with the C50 costing an additional £340 including Pulsar’s Digex X850S illuminator, or an extra £200 without it. As all Pulsar’s contenders include illuminators and mounts in the price and the Pard also integrates a laser rangefinder, it’s clear that the C50 has its work cut out if it’s to justify its premium price tag and win a place for itself on shooter’s rifles.

As ever, when unboxing the Pulsar, the first - and lasting - impression is of quality. Everything is perfectly finished and presented, plus the scope has the authoritative heft and feel you get from the best European optics brands (1.15 kg / 408x78x83 mm). The manual is also comprehensive and clear, although the small format means that older eyes may prefer to download the PDF version.

At the rear is a comfortable, concertina-type rubber eye-cup that encompasses the scope’s 50mm eyerelief and defends the user from any impact under recoil: a non-issue with the UK’s most popular calibres, but still a necessity given the C50’s rating of 600 J (equivalent to .375 H&H, 9.3x64 or 12g slug). The eye-cup attaches to the ocular bell by magnets of paradoxical strength (it’s hard to knock off yet easy to pull free).

The tension on the fast-focus dioptre ring is good and ensures that once you have the display crisply focused, it stays that way. A 3-button panel on top of the ocular bell resembles the illumination adjustment on some premium day scopes, but on the C50 it gives quick access to the power (on/off/standby), magnification (3.5x/7x/14x) and recording (still/video/ pause) functions via buttons that are easy to identify by touch alone. The power button has a unique additional function, but we’ll come to that later.

The aluminium body of the C50 features a 30mm main tube, offering 59.4 and 62 mm of space behind and ahead of the saddle, respectively. This permits the use of a variety of standard 30mm mounts, although the reduced eye-relief (about 45% less than a regular day scope) will require the use of a reach-back setup.

The saddle, meanwhile, is full of surprises. Simply remove the caps from what appear to be the windage and elevation turrets and you’ll find a USB port for recharging/data transfer or a remote 5V power pack under the former, and a compartment for a rechargeable 2,000 mAh APS2 (supplied) or 3,200 APS3 (£39.95) battery pack under the latter. The removable APS battery supplements a built-in 4,900 mAh cell, with a nonnegligible run-time of 10 hours, and is ‘hot-swappable’, meaning you can drop in a fully-charged replacement without powering down the unit first. It’s good to see Pulsar moving to the USB-C format too, though I would like to see a port-cover redesign that would hold the USB cable securely in the field.

The third turret isn’t what it seems either. It sits in place of the traditional parallax and illumination wheels and you get a multifunction controller with a button for activating menus and selecting items set at the centre of a dial that lets you scroll through them. Further functionality is available via an optional Bluetooth controller (£42.95) that can be attached via a 3M hook/loop strip wherever it suits you. Menus are clearly displayed on the sharp 1024x768 AMOLED screen above a data bar showing the time, rifle profile, zero distance, and WiFi status, plus the remaining charge in both batteries and a couple of other items I’ll mention shortly.

Ending our tour at the objective end, we find the usual parallax-adjustment ring for focusing the target, followed by an additional ring that is unique to the Digex C50, as it lets you switch between daylight and low-light apertures, marked with sun/moon icons that also appear in the data bar. These options work in conjunction with the extra function of the power button, which is to switch between colour and B/W monochrome modes.

There is a marked tactile difference between the focus and aperture rings, with the former having a ribbed rubber grip and the latter a scalloped anodised finish. Nevertheless, I still managed to mistake one for the other, especially when wearing gloves. It would be worth mounting a coaster on the focus ring, therefore, not least because changing aperture, switching from colour to monochrome, and activating the IR all call for a nudge of the focusing ring to accommodate the optical shifts involved.

The original Digex N450 is an accomplished NV scope, but the colour and aperture options have put the C50 in another league. Daylight/colour performance is good, with a bright, contrasty and well-saturated image, though the 1928x1088 FHD CMOS sensor starts to show its limitations when you activate the digital zoom to go from the 3.5x optical baseline to 7x and 14x. For most purposes, this doesn’t matter, just don’t expect to see your bullet holes when zeroing on paper at 100m.

As the light starts to go, progressively bumping up the brightness and contrast maintains the image quality well. When that is no longer enough, changing aperture extends full-colour imaging well past the point at which the naked eye perceives only a desaturated panorama. After that, it’s time to blip the power button to switch to monochrome, and once more the image brightens and sharpens. Depending on ambient moonlight/starlight levels, it may be a while before you feel the need for the illuminator.

As noted earlier, this is a £140 upgrade. It doesn’t disappoint, however. Power comes from an APS2 (included) or APS3 (optional) battery; the integral mount hinges around the 30mm tube and fastens with a QD clip; a rubberised power button – accompanied by a pinhole status light - and a variable-intensity dial are located on the stem; plus a rotatable/lockable head lets you zero the beam to your field-of-view. Pulsar’s choice of a nonfocusable head ensures a beautifully-even beam, and a 500 mW power boost over the previous X850 unit means there’s enough reach for confident shot placement at 200m. The C50 also compensates better than previous models for back-scatter from intervening vegetation and terrain. Even so, best results were achieved with the beam angled into the top 2/3 of the field of view.

Zeroing was quick and easy, thanks to Pulsar’s ‘freeze’ feature. The procedure is as follows: shoot once, observe the strike, centre the reticle on the target, take a ‘freeze’ snapshot, dial the auxiliary cross onto the bullet hole, accept the new setting, and shoot again to confirm zero. Subsequent fine-tuning is best achieved via the numerical horizontal and vertical offset values shown in the zeroing screen, since each ‘click’ is a convenient 1cm @ 100m. 10 different reticles are provided, plus 5 rifle profiles, each offering 10 zero distances, making the C50 ideally suited to swapping between stalking, varminting and air rifles, as required. The initial zero on my .204R proved entirely reliable over a dozen foxing sorties, with time-of-shot video showing a perfect match between reticle position and terminal impacts.

Video (MP4) and stills (JPG) are both saved at 1024x768, which doesn’t do full justice to the C50’s live image, but you do get 16GB of online storage and a further 16GB in Pulsar’s cloud when using the Stream Vision 2 app. Like its predecessor, Stream Vision 2 sometimes stubbornly refuses to recognise that your phone is already connected to the scope’s WiFi, but once paired up, it is both faster and more stable. At present, you can only share one file at a time, however, which is tiresome.

Of course, Stream Vision’s shortcomings aren’t the fault of the C50, which is a fantastic tool for round-theclock hunting. In full darkness, the C50 has all the definition and power you need for successful forays against rats, rabbits and foxes. But the true value of the C50 is being able to see in colour in the twilight, especially in that hour after sunset in winter that can be so vital to your doe cull. In such situations, it is a huge advantage revealing the brown pelage of animals against the green foliage around them as nothing else can.

And that’s the crux of it. Competing brands jostle for position, offering higher resolution, and bundling-in illuminators, rangefinders and mounts, but Pulsar provides performance where it matters, in an impeccably-built product, from an internationally-renowned marque, and backed by Thomas Jacks, the UK’s leading night-vision specialists. Cry once.