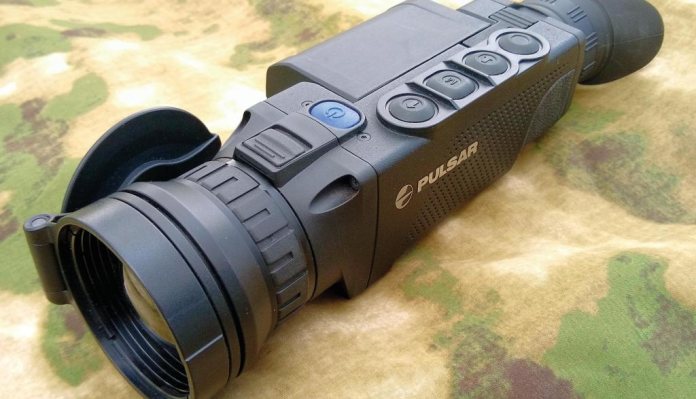 Pulsar is famous/notorious, for constantly bringing out new models. Undoubtedly, this leaves a lot of people wondering if they should buy now or wait for the next upgrade. Of course, this is a recipe for endlessly going without instead of reaping the benefits of actually having a thermal in your hand.

Thermal is the most dynamic sector of today's consumer optics market. so the technology is constantly evolving, and it would be far worse. both for Pulsar and for us, the consumer, if they were to stand still .That said, the incremental nature of Pulsar's upgrades also means that most of the components in each new product are thoroughly tried and tested, so you know you're buying something that will be seriously durable and reliable.

The Helion line is a great example of this: giving real performance advantages with each generation of its progressive development. I still use a first-generation Helion XQ19F - bought soon after it was launched in 2016. Five years on, it has proved 100% reliable, has repeatedly benefited from Pulsar's firmware upgrades and still does most of what I need from a spotter. It also gives me a great benchmark against which to measure just how far Pulsar's Helion series has come, as represented by the current flagship model, and the subject of this review: the Helion 2 XP50 Pro.

On one hand, the form factor and control layout are virtually unchanged. Thus, the XP50 Pro still has a distinctive billetshaped body, with the control buttons on top %28power at the front, and minus, menu, plus and record in a line), the Micro-USB port and QD B-Pack battery contoured into the right flank, and the heat sink on the left. On-board storage remains a capable 16GB, and the unit can share data with Pulsar's Stream Vision smartphone app thanks to its built-in WiFi transceiver.

As before, the germanium glass objective lens is well protected by a rotatable hinged cover that clicks into place when closed and can be neatly folded flat alongside the housing when open. The ocular lens has a rubber buffer with a half-moon glare shield that can be rotated to favour left or right-eyed viewing. Each lens is still adjusted by a rubberised focusing ring whose generous size makes it easy to get the most out of the thermal image and the display.

Also familiar %28identical), is the palmstrap fitted to the right-hand side; the tough Cordura carry-case with its flip-top closure, the belt loops and QD shoulder strap; and the suite of ancillaries %28battery charger, Micro USB charging cable, rubber battery cover, and blue lens cloth).

However, on the latest Helion 2s %28the XP50 Pro and XQ50F), the externals have undergone a material change, acquiring a magnesium alloy body in place of the original polymer moulding seen on the standard Helion 2 XP50. First introduced with the compact Axion line, the alloy housing really comes into its own in the bigger-bodied Helions thanks to its unique combination of rigidity, light weight, and thermal conductivity. One dividend here is that the heat sink is now smoothly integrated into the housing, making the old bolt-on radiator a thing of the past. On the debit side, the result is a slightly taller and broader body, in the Pro model, at least.

At the front end, the lens has the same nominal 50mm specification as the standard XP50 but has been made larger as well as faster, and its internal geometry has been tweaked to improve its efficiency. It is also readily detachable, via a sliding catch. The lens/sensor combination gives you a 2.5x native magnification, while an 8x digital zoom lets you boost in 2x increments to 20x. For me, given a choice of high or low magnification in a thermal device, less is more, even in high-end units like the XP50 Pro, because low magnification and a wide field of view typically provide more useful information than a bigger target image in a narrower field.

The next stop on the imaging train is the sensor. As befits an 'XP' model, you get a 620x480 pixel array with a fine 17 μm pixel pitch, but this being the 'Pro' version, the sensor has a market-leading NETD %28Noise Equivalent Temperature Difference) rating of <25mk instead of the standard <40mK. This translates into super-fine gradations of shading, giving an increased ability to detect heat sources and maintain a sense of landscape and location, which is especially useful in scenarios where the signal is suppressed by rain or fog. All the aforementioned high-end hardware comes together to send some seriously precise data to the processing unit, where Pulsar's algorithms go to work on it before passing it on to the display in the eyepiece, where the manufacturer has taken yet another big step forward.

Previously, their displays have been (to borrow a phrase I heard the editor use recently in another context) “100%25 adequate”, i.e. as good as they needed to be, but no better. Then, in the Axion series, they started to equip their standard units with 960x720 px displays, while offering a premium tier with 1024x768 px Sony screens %28XQ38, XM30s). For the first time, you could really see what the display was, or wasn't, bringing to the party.

In the 'Pro' model, the Helion 2 has received the same treatment, getting a new 1024×768 HD screen that makes the most of the rich data stream from its big lens and cutting-edge sensor. It makes the 640x480 unit in the standard XP50 model look basic by comparison. In any event, the result is simply the best Pulsar image to date.

There are some nice upgrades regarding image capture, too, since the video is now recorded in MP4 format, enabling the data card to hold a whopping 8+ hours of 1024x768 action. Additionally, the 'Pro' model is compatible with Pulsar's new 'Stream Vision 2' app that increases connection stability and transfer speed.

So, you might be asking, is there anything not to like? The truth is: not really! But if pressed, there are two things I think Pulsar could do to make the XP50 Pro better, and although one is much more fundamental than the other, both apply to more than just this model.

The first thing I'd ask for is a neck strap. I have no time for the hand strap, to the point that removing it is the first thing I do when preparing a new unit for use in the field. If my monocular is slung around my neck, I can make a rapid transition to my rifle without first having to free my hand from a strap, and without the risk of dropping the monocular in the mud, long grass, etc., as I do so.

The second thing I'd ask for is an adjustment to the processing algorithm to prevent over-exposure of body-temperature targets against significantly cooler backgrounds. Currently, units like the XP50 Pro give wonderfully detailed scenic views in which animals stand out like neon signs. This is great for spotting, but the intense contrast produces a glowing/ silhouetting effect that can make it hard to pick up the detail required to assess the sex, age and condition of animals such as deer. It is also tiring to observe them for extended periods. You can extract some additional detail by changing the viewing mode or tuning the brightness and contrast settings but often end up with a washed-out background and an animal that is still over-exposed. I'd love to see Pulsar address this, so as to do full justice to the amazing sensitivity and resolution of premium units like the XP50 Pro.

My last Pulsar test unit was the Accolade 2, which I love for lots of good reasons, not least the - undoubted - advantages conferred by two-eyed viewing in sharpening perception and reducing fatigue. Nevertheless, for sheer overall image quality, the Helion 2 XP50 Pro more than pips it at the post. Consequently, if I were in the market for either, I'd be thinking hard about what was most essential to what I actually do in the field, and about what I could do with the extra £1,600 left in my pocket after choosing the Helion!