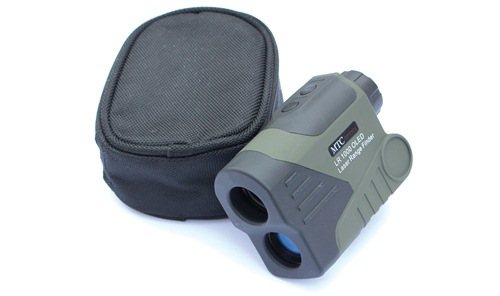 MTC Optics supply a comprehensive range of top quality, fully featured scopes, some being amongst the most unique on the market. They’ve also had a Rangefinder on their roster, the Rapier for quite some time. However, in a heavily saturated market, products need to be ‘special’ to stand out.Realising this they’ve now launched the Rapier 2 that utilises modern digital technology to enable it to be used both day and night. Before continuing I must stress this isn’t a digital night vision unit, it still needs light to ‘read’ the range to the target.

The Rapier 2 has quite a ‘blocky’ appearance measuring 110 X 75 X 40mm and weighing a mere 162grams. The rubberised armoured ABS casing has a flat underside with a run of relatively wide but shallow ridges that also reach a short way up both sides to aid grip. The sides angle inwards at the top to the narrow rear flat section where the two rubberised control buttons are. The front of the casing also has four integral raised narrow horizontal ‘bars’ to aid grip and there’s a lanyard hole at the back.

Powered by a single CR2032 3V Lithium battery the Rapier 2 is used vertically in the hand with an over & under lens set up. The viewing lens is set above the eye-safe laser emitter/receiver. The chunky eye piece has a ridged outer and operates smoothly to adjust the fast-focus ocular bringing the ‘aiming reticule’ in the viewfinder into pin sharp focus.

Unlike traditional rangefinders, the Rapier 2 uses an OLED (Organic Light Emitting Diode) high visibility display screen. This technology is used in modern TV screens and monitors as it gives a brighter image with more resolution. When used to ‘light up’ the red colour aiming reticle it allows you to look ‘straight through’ – clearly seeing whatever is being ranged and the information displayed.

This allows the readings to be easily seen in low light conditions and at night. But as a light source is required for you to see quarry and to take readings at night, most will use the Rapier 2 in conjunction with a gun mounted lamping kit.

The two rubberised pressure switches are marked ‘POWER’ and ‘MODE’ and are ideally positioned for operation while holding one-handed.

Unusually the Rapier 2 has a pre-set (default) to read distance in yards and although it displays the distance numerically along the bottom of the viewfinder upon taking a reading there’s no visual ‘Y’ symbol to indicate the notation. To change it to be read in metres, hold the mode button down for approximately 8 seconds until the ‘M’ Detail of the display in view, which is easy to see in all lights symbol appears to the right hand side of the viewfinder. To return to default you repeat the same procedure.

At the top of the viewfinder it displays ‘AF’ when in distance mode and ‘SP’ when you change to the ‘Speed’ function using the mode button. When a reading is being taken a ‘lightning bolt’ symbol appears in the left hand side of the viewfinder indicating a good ‘pulse.’ If you want to use the ‘scan’ mode, depress the power button for approximately 8-seconds until the ‘lightning bolt’ symbol stays on. To return to single range mode, repeat the process again.

An auto shut off activates when the unit is not being used after 8-seconds to conserve battery life. You can also alter the brightness of the ‘lit’ OLED display by holding both of the operating buttons down for 8-seconds until the letters ‘SE’ appear at the top of the viewfinder. When they do pushing the forward button reduces it while pressing the rear increases it. When set to your preference, hold both down for 8-seconds again and the unit will return to the default switched on mode and the intensity of the reticule is remembered even when you either manually switch off the unit or auto shut off activates.

I tested the unit’s ability to accurately determine range alongside a Leica 800 and its claim to determine range to +/- 1m did prove valid out to 500+m. However, I would also say that readings taken with any form of laser rangefinder right up to the £2000+ binocular-types are influenced by the size, shape, reflectivity and colour of the target as well as its distance. Also in mist and fog the beam can be refracted by the water vapour in the air and will not read.

As with any device of this type you must hold it steady on target as a slight movement at your end can result in an under or over reading of unknown amount. I would always advise pinging the item to be ranged a few times then working out the average reading, as any distance anomaly will stand out!

Overall, the MTC Rapier 2 is an impressive device, the design is well thought out, easy to use and compact enough to be slipped into a jacket pocket. Also, all external lenses being set quite well back in the casing gives them a high level of protection. Given the cost of comparable and perhaps more household name units is up into the £500 bracket and beyond the Rapier 2 presents exceptional value for money for both airgunners and rifle shooters!

Robust build, lightweight, compact, ease of use and good quality

MTC Optics have addressed an ever-growing market with a practical and cost effective laser rangefinder.