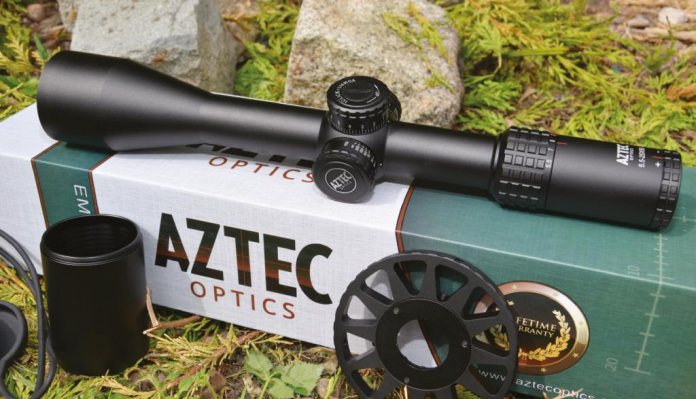 Increased sophistication is everywhere in today’s airgun market place, and whilst it’s fair to say that downrange accuracy hasn’t dramatically improved over the last few decades, what has, is the level of refinement; not to mention the features and extras included. Of course it’s not just the guns that have benefited, and one look at the current crop of scopes available, shows just how far we’ve come.

In a competitive market, it’s all about going that extra mile, and on test here is a scope from the brand new Aztec brand. It’s their Emerald 5.5-25x50 and first impressions when you open the attractive super padded box, is of a high quality product, beautifully presented. This model comes complete with a sunshade, 4” parallax side wheel, cleaning cloth, and elasticated lens covers. It will normally retail for £390, but there’s an introductory offer of £375; so, on the face of it, it looks competitive.

The official marketing line is that this scope has been designed in the USA by airgunners for airgunners. Representatives from Airguns of Arizona went over to China with their own specification of what constituted an ideal airgun scope, and the Aztec is the result. The original spec apparently featured flip up lens covers but the elasticated ones supplied are fine.

With the trend for ultra chunky, tactical-style turrets, I was surprised to hear the favourable feedback from distributors; Gilbert Distribution that shooters who had had a sneak preview were thankful for the relatively low style instead. It seems there could be a kick back for common sense! Where FT shooters need large, easy dialling drums, to dial in the range for each target, there’s no such requirement for Hunter Field Target (HFT), since the main rule says we cannot adjust the scope for the duration of the match. The Aztec turrets are sizeable, but in proportion.

So let’s just confirm the spec on offer here. For a start, we have variable magnification between 5.5x and 25x, which is versatile and a 30mm body tube. There’s a well marked reticle, in the 2nd focal plane. Turrets are the push pull variety- pull to unlock, adjust and then push down to lock. Click values are ¼-MOA. Windage and elevation are clearly and precisely marked up too, so adjustment and zeroing should be straight forward. The parallax drum is on the left of the saddle and if you want the 4” side wheel can be easily attached by three grub screws to extend the range markings, and in theory improve the accuracy. Markings start from 10yds, then 15,20,25,30, then 40, 50, 75, 100, 150, 300 and ∞.

The DYND1 reticle is impressive too, with a central floating dot, and four equidistant lines around. As an example of proportion, this central box was the perfect tool to bracket a 25mm kill when viewed at 8x at 25yds. It’s designed to offer ½-MOA values at 9x magnification, and 1-MOA at 18x, and this of course marries up nicely with the click values. Both are marked in red on the dial as a reminder. HFT is shot between 8 and 10x by the majority of competitors, and at this relatively low mag, most targets should appear reasonably clear!

The Aztec has a minimum marked up range of 10 yards on the parallax drum, but I found this would actually come down to 8 yards which is handy. For the record, range markings over 20 yards came in around 5 yards less on the dial EG, 30 reads as 25 etc. Not a major problem, and fairly common. This will vary depending upon individual eyesight and conditions too.

The turrets are positive to open and close, and so are the clicks. The mechanism has the fairly common 60 clicks per revolution, and with 4.25 full revolutions on both windage and elevation, there’s plenty of adjustment range. I set parallax to just over 25 yards on the dial, and targets through the ranges were useably clear throughout. Having played around with usable magnifications 8-10x for HFT, and adjusting the parallax, I didn’t find the image differentiation that obviousas in blurring out at distance- a method used by some competitors these days, but clarity and the vibrancy of the image was marked.

Edge to edge clarity with no aberrations is what we need, so perhaps a victim of its own quality! A pyramid of progressive windage dots is a nice touch, may be a little fine, but they all add to the wealth of reference points built in. That reticle is excellent, with bold enough stadia, yet precise in use- and the acid test- would I feel happy competing with it; most definitely!

In short, I liked the Aztec. It feels well made, is nicely finished, and more importantly, it offers good glass for reasonable money, and an impressively clear, crisp image. It’s robust enough to be put on rimfire and centrefire rifles, and apparently one is currently being used comfortably on a Bushbuck .45 air rifle, which produces up to 600 ft/lbs; in the US, of course! Aztec Optics is planning another couple of models, but they’re in the pipeline and not expected for another 5-6 months. As for the spec on test here, it’s difficult not to be impressed; whether for hunting or HFT, especially with Aztec’s Lifetime warranty.