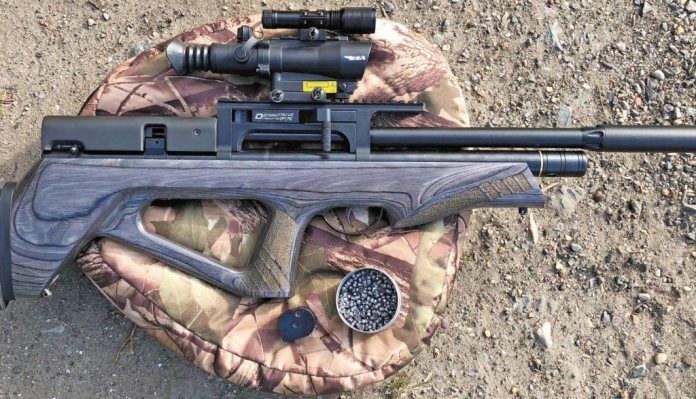 Unless you’ve been under a rock for the last six months or so, you’ll know that BSA have joined the Bullpup club with their superb Defiant PCP. This compact beauty has certainly made this lifetime BSA fan very happy and this new model is flying off the shelves. I first shot one at the British Shooting Show, and now have one on test. I’ve pulled of some lovely shots with it out to 55 yards. Accuracy is very good, with one-hole, 5-shot groups at 30 yards easily possible, if you do your bit; that’s where I’m going wrong then!

The Defiant I’ve got on test is unusual in that it’s been fitted with the optional Picatinny rail, instead of the standard type scope base. This type of mounting system is becoming an industry standard, as it allows the easy fitment of a wide range of optics and accessories, such as scopes, reflex and red dot sights, torches and lasers plus 45⁰ offset sights and bases. BSA Optics have recently developed a very clever sight, the Tactical Weapon Red Dot Sight With Laser (TW30RDLL) that houses a red dot and a laser in one unit with an integral Picatinny rail on top of the alloy body, so that the included compact 140-Lumen torch can be fitted to it using a thumbwheel. The resultant item is therefore perfect for all manner of short range shooting, such as good oldfashioned plinking and a spot of vermin control after dark. So, I decided to team it up with the Defiant to see what it offers.

The sight has a one-piece body with a diameter of 30mm, which increases in size towards the front to accommodate a 30mm objective lens and has the look of a Trijicon ACOG about it. Typically for this sort of sight, here’s no magnification and it uses a simple round red dot of around 5MOA size. Adjustment is by standard, capped, windage and elevation turrets at 3 and 12 on the rear body. Underneath the main tube is an integral 650-nm laser, complete with small windage and elevation dials. A rubber bellows is fitted to the rear of the eyepiece to limit extraneous light entering whilst in use, but due to the sight’s extended eye relief, this isn’t really needed in most situations during the day. The intensity of the central dot is controlled by a rotary rheostat on the left of the body, with power levels from 1 to 9. The dial also controls the laser, with one ON position. Mounting is taken care of by the two thumbwheels on the right of the base and they have central screwdriver slots should they be needed on any sort of recoilless rifle, maybe on a springer or gas ram.

Rat attack, or maybe not!

Once mounted, it was a simple job to zero the red dot at 20 yards and a little bit more fiddling to align the laser with the fall of shot at 10. When I checked out the amount of light that the torch emitted at night, I was very surprised by how bright it is, also the beam can be adjusted from flood to spot via the rotating collar at the front. OK, it’s not mega tight on the narrowest setting but it’s still very useful.

With the twin zeroes, above, I thought I’d be covered for any rats that decided to pop out of the farm muck heap at dusk using the torch, or even the odd feral pigeon or magpie that ventured into the farmyard looking for a free meal during daylight. I had the Defiant’s 10-shot magazine full and inserted into the rifle and I readied myself for some rat action. I then waited and waited but nothing! The farm management must have upped their own pest control game with poison and traps because I didn’t see a single rat on any of my regular visits! I guess I should be pleased that they were being controlled but I was there to do a job, that clearly didn’t need doing! I was looking forward to being able to include a pic or two of the fruits of my labours but I’m afraid I have nothing and not a single feral pigeon, magpie, crow or parakeet ventured into the farmyard while I was suitably armed. The Defiant and Tactical Weapon Red Dot Sight with Laser was great during some plinking sessions, but pleasurable though they were, it’s not quite the same as a ratting session I was expecting!

This sight did everything asked of it as far as targeting things with the red dot and laser and the torch did a great job too. However, it’s just a shame pickings were slim. The unit is well designed and made and works well. The torch can be easily removed and used as a stand-alone unit, but I think it could benefit from a remote switch when employed on top of the sight, as you must break your firing grip and position to operate it, which with twitchy characters like rats is just too long and gives them the chance to hide. Apart from this, I really have no complaints. As for the rats, well, I’ll just have to wait a few months for them to make their way from the fields and hedgerows in the autumn and try again.