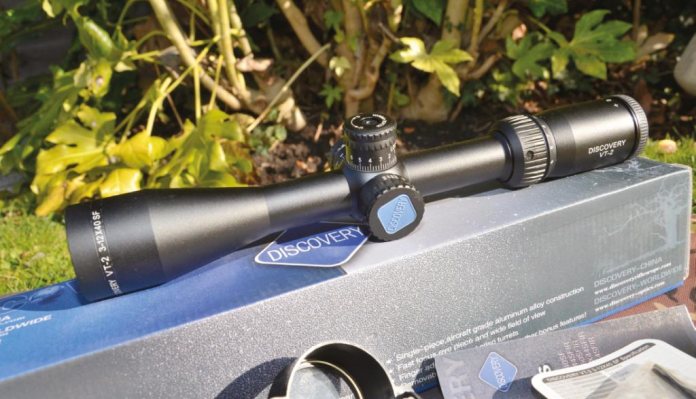 Looking to get started in airgun shooting, and you arrive at the classic situation where to over invest would be to risk possibly an excessive amount on a sport, which just may not be for you. Yes, we can spend thousands if we wish, and at the very top level, in any field or sport, premium equipment will always command serious money. Yet treading carefully and spending wisely has to be the way to go for many; by that, I mean testing the water, taking a more measured approach. Invest on behalf of youngsters, and that really can be the case, where their interest can just dissolve overnight, and we’re left holding a stake in expensive equipment, which is guaranteed to lay about unused for some time. So, if beginner’s kit is required, or a tight budget just has to be adhered to, then the scope I have on show here, could just be the answer.

Discovery are now well established on the airgun scene, and they produce a range of scopes that span several price points, but the VT-2 on test here has to be on the face of it, supreme value for money, coming in as it does at just £99. In fact, even possibly less at the time of writing, as the UK importers, Sure Shot Airguns, are currently doing a deal, trimming the RRP still further. This VT-2 3-12 x 40SF comes supplied with elasticated lens caps, instructions and cleaning cloth, and with a highly usable specification, it has to be worth a peruse.

Variable magnification between 3-12x, along with a 40mm objective lens, means this model is marketed as a generalpurpose beginners, or starter hunting scope, and the relatively modest objective bell means that it won’t easily unbalance a rifle combination. It’s of the more common second focal plane (SFP) variety too, so proportions will change regarding aim points, as magnification is increased.

‘SF’ in the model name denotes Side Focus, and parallax correction is achieved for any given distance via the left hand knob. Distances are marked up as a minimum of 10 yards (the dial does turn slightly below this mark), then 15, 25, 50, 100, 200 and ∞. Resistance on the dial here, was reassuringly firm.

Setting the fast focus at the rear ocular lens was easy, although the adjuster ring did move just a little too easily. I would always recommend checking it before any use; be it zeroing, competition or hunting, as getting the reticle pin sharp is the aim in all conditions. Set the side parallax to a particular distance or a viewed object so that it comes clearly into focus, then use the fast focus at the rear to fine tweak the reticle when viewed at the same distance. Both target and reticle should now be crisp and clear.

This model is built around a one-piece, one inch body tube, which is constructed from aircraft grade aluminium. Whilst the turrets are tactical style, they are precisely marked, and not overly wide, as some irritating rivals are. Click values represent the very standard measurement of ¼” @100yds, and the mechanism is of the push/pull variety. Pull up the turret, and adjust, then push it down to lock once the zero is all set. Clicks are impressively positive, and the individual drums can also be removed via the top bolt and re-positioned to your zero position if required. Thereafter, any further adjustment for windage, or for a different pellet on the day, could be tracked against the actual set zero for reference. Zeroing on test incidentally, all worked perfectly, with my tracking around a grid, confirming the internals.

Fully multi-green coated optics are listed, along with anti-reflective coatings for enhanced brightness and, in use, the image is pretty impressive. I was blasted by bright sun for the test, but as with most optics, a back lens enhancer rubber end piece would help keep sun at bay. The lens caps supplied are of the elasticated variety, but are also see-through, with one end being tinted yellow Perspex. I was hoping that the scope could be shot with the caps in place in particularly bright sun, to remove glare, but in practise, it’s not a clear view through at all - so forget that idea!

The reticle fitted to these scopes is just specified as MD denoting Mil-Dot, and the design sees four equidistant stadia, all with six dots, bordered by thick outer posts. These help guide the eye when viewing into a dark tree, but the dots on the reticle are maybe just a little vague. Overall though, the system works, and there are plenty of proportional aim points to work with and master. Specification is kept straight forward with this model and, if more sophistication is sought, with a more elaborate reticle for example, or even an illuminated design, then all this is available in other models higher up the Discovery list. I have never felt the need to indulge with reticle illumination, but I appreciate that a sizeable number of enthusiast do venture down this route. But basically, it’s all there if you want it.

If you want something of an all-out bargain, then this VT-2 is surely hard to beat, with genuine edge to edge clarity and a quality of image from my test sample, that couldn’t fail to impress.

All the standard scope claims are here as you would expect, such as Nitrogen-filled, shock, water and fog proof. Consider that asking price again though, and this model really begins to stack up with regards to features versus cost. And that’s before we have even started on Discovery’s Limited Lifetime Warranty, specifying as it does, that this model comes guaranteed free of defects in materials and workmanship for as long as the product is in possession of the original owner. That sounds very fair to me, making this VT-2 Disco even more of a steal in the sub £100 bracket.