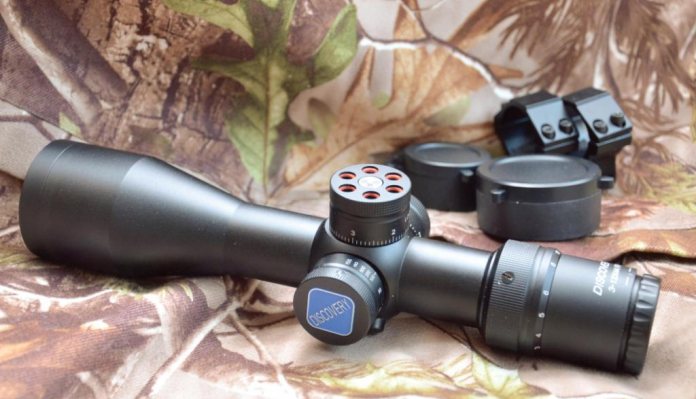 Discovery Optics have gained in popularity over the last couple of years, and their combination of pleasing build quality, well researched features, and fairly modest RRPs, goes some way to explaining their ascent as a brand.

Open the box, and the VT-3 3-12X44 SF FFP certainly makes an impression, with its short, chunky, profile. Surely one of the most compact scopes currently available against rivals with a comparable specification, this VT-3 feels solidly made, but at 17.6oz, it still makes its presence known.

Plastic flip-up lens covers are provided, but with my test scope, the rear cover just wouldn’t stay put, and kept falling off, so I gave up, and just put it to one side. An inspection of the inside of the cap revealed that, if the rear fast focus ring is dialed out, the cap simply isn’t long enough to allow for a proper fit. A minor point, but an irritating start, nonetheless. A set of two, split ring, mounts are also provided in the box, and here, these proved perfectly satisfactory.

As mentioned already, there’s a distinctive look with this scope, and the rugged, onepiece 30mm body tube, has something to do with that. Those unusual turrets picked out in orange also really look the part, although, as was pointed out to me by UK importers, Sure Shot Airguns, the orange is actually just small rubber ‘o’ rings, which can always be picked out with a tool and discarded. I reckon it looks pretty cool though, and with the turrets being of the push-pull design, with fairly distinctive 1/10 Mil click adjustments, it all works well. The official specification boasts of ‘solid machined torus erector supports’ too, which all help the scope’s resistance to recoil, but the definite click of the mechanism and range of adjustment are basics we all look for, and these finger-friendly turrets tick the boxes on those fronts.

Looking to the spec on offer here, SF’ denotes Side Focus, whilst ‘FFP’ refers to First Focal Plane, and for anyone not familiar with the term, it refers to where the reticle sits within the body of the scope, which dictates how it operates. FFP effectively means that the graduations and spacing values within the reticle, will stay as a constant, throughout as the magnification is altered. In other words, the gaps between the dots will increase or decrease, as the magnification is adjusted up or down, giving correct Mil spacing at all magnifications (unlike scopes where the reticle sits in the Second Focal Plane). An advantage for hunters, for example, but not so relevant to HFT shooters, where we aren’t allowed to alter the scope in any case during a competition.

Focus and parallax adjustment can be set via the drum on the left of the saddle, and this is marked with distances in yards from 10, then 15, 25, 50, 100, 200, 500, then infinity (∞). The movement of this control has a satisfying amount of resistance too, so shouldn’t be too easily knocked off its setting accidentally. I ran my usual ‘around the grid’ exercise, moving zero up right, down, left and up again, to check the tracking of the adjustments, and all came in spot on, on that score. One interesting detail of this scope, is the honeycomb filter sunshade (kill flash) screwed into the front objective lens, again helping to keep the overall dimensions to a minimum. I never noticed it in place, but I do wonder about any aberration on the image if this fragile metal structure should get damaged or distorted. Maybe a bit of a gimmick in my book, although it definitely gives a different look, for those wanting to make a statement, and it is easily removed in seconds.

All the standard claims are here, such as fully multicoated optics, and high-quality seals, but I can certainly vouch for the quality of the sharp image throughout my testing. 100% water and fog proof performance is on the spec sheet then, which are all fairly standard expectations, and elements that we take for granted, irrespective of price in today’s crowded market place.

Minimum focus, as mentioned, is down to 10-yards with this model, and in use, I have to say, I thought the SS2 reticle among the best designs I have encountered. Bold, Germanstyle outer posts at the top and sides, mean that the reticle isn’t easily lost in challenging light through treetops, and can be tracked via those heavy posts if necessary. As for the main stadia, having hollow Mil dots is a nice touch, and with ½-Mil hash markings also included, the number of reference points available are enormous.

In short then, this is a versatile little number. At a shade under £220, there’s plenty of usable features built in, and those diminutive dimensions make this an ideal model for a variety of applications. Need a super short scope on a break-barrel, that has to avoid fouling the breech area? Then this could be the one. Sometimes fitting a large scope can just unbalance a combination, even just regarding the visuals; and again, this highly competent model would fit the bill perfectly. Either way, this modestly priced Discovery VT-3 3-12x44 SF FFP stacks up nicely, as a super neat, ultra-compact hunting scope, with impressive build quality, and a superb reticle.