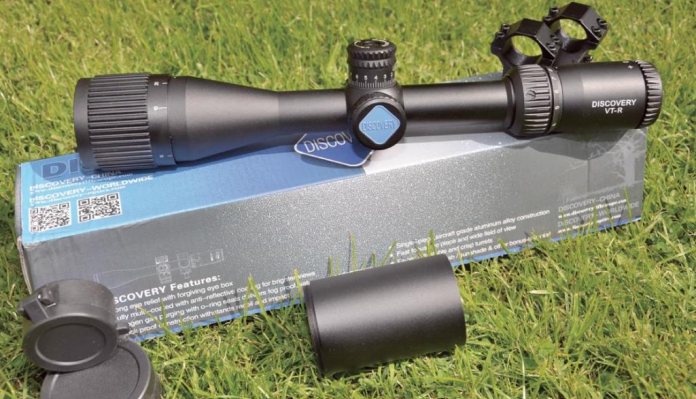 It’s long been a source of amazement just how many bargains are now available in the scope market, and with construction in the Far East helping slash labour costs, the RRPs sometimes have us doubletaking. On test, is surely one of the best bargains available, and at £69.99. including a set of ring mounts, a sunshade, and even a set of half decent flip-up lens covers, this latest Discovery VT- R 3-12X42 AOE really is a cause for a sharp intake of breath.

So, who exactly are Discovery? Well, whilst they are a relatively new brand, which started in 2014, what gives them added credence is the fact that they are apparently manufactured in a factory founded by an exdesigner of Vortex. Distinctive blue trim makes their models instantly recognisable, but this new VT-R looks set to make a name for itself on merit alone.

With variable magnification from 3x through to 12x, it’s a good all round spec, and with that medium sized 42mm front objective, this model has potential use for Hunter Field Target too, as well as live hunting duties. Push pull lockable and resettable target turrets, an illuminated HMD reticle, and ¼ MOA click values, all help the cause. So, let’s get straight in and see how it looks for the money – or lack of it!

On opening the protective box, this model instantly gave me a retro flashback, since that front parallax adjustable collar features ribs that are rather Kassnaresque. That’s not a bad thing, and unlike FT, where twisting the focus during a match, with the gun in the shoulder, really now lends itself to a side wheel, general duties, or HFT, where we aren’t allowed to touch the scope for the duration of the shoot, has no such requirement. So, having front parallax correction, or a side focus, really makes no odds.

This model is built around a one inch body tube, which is fine by me, although a minor irritation comes with the included mounts featuring a sticky cushion pad inside. These are often more trouble than they are worth, but maybe this isn’t the time to whinge at such detail. Just how ungrateful am I at this crazy, all-in price?

As mentioned, the target turrets are of the push pull lockable variety, and can be reset to show ‘0’ once the mechanism is zeroed; simply by slackening the retaining screw, and swiveling the turret cover around. Turret click values are ¼ MOA, and are impressively positive, as well as being really clearly marked up. It’s also refreshing that the turrets, whilst tactical spec, are almost low profile, with no unnecessary width to play havoc in a hard case.

With my zero set, I ran the standard grid check, to verify that the turret movement could re-track and come back to the initial zero point and all worked fine. Both the front parallax ring, and the magnification collar at the rear, moved with perfect resistance, suggesting they wouldn’t easily move out of adjustment accidentally. Looking to the reticle, this model comes fitted with the HMD (Half Mild Dot design, and with thick outer lines, and that finer central area, it’s difficult to lose the picture in foliage or up a tree for example. Red or green five-stage illumination is here too; so, for those extra dark sessions, this VT-R should be a bonus.

I set the magnification to 9x, and then when I viewed a 15mm kill zone (the worst we find ourselves up against in HFT), at 25-yards, each division (with a Half Mil Dot value), would perfectly bracket the kill. Handy for sure, and with the front parallax set to around 27-yards, I found image quality extremely good; vibrant and crisp to the edge, with no distortion. That said, every distance from 25 through to 45 looked fairly clear, so the business of waiting until a target blurs at distance in order to gauge the range, like some competitors do in HFT, is seemingly of little use here.

As for the internal specification, this model is quoted as having the VCF Optical system with full multi green coated lenses, along with Discovery TES torus erector support technology, bringing durability and reliability and high resistance to recoil. That’s the marketing blurb, but let me just say, it all just feels solid, well made, and nicely presented, and not a little confusing, given that extraordinary RRP!

This Discovery comes with all the usual standard guarantees, being nitrogen filled, waterproof, shockproof, and fogproof; and, with a current retail price of £69.99 including a set of mounts, reasonable quality flip up lens caps, and a screw-on sunshade, this scope really is astonishingly good value for money. Especially when there’s also the Discovery Lifetime Warranty to take into consideration. How it is done for the money, I have no idea, but it’s hard to see a better bargain currently doing the rounds.